A bench has been built in a patch of recently churned clay, a rusty red. The bench matches the colour, dedicated to Jamie Eve who passed away in 2016 aged 26. His dedication tells passersby that he loved this place. A bouquet of tulips and ivy lies on the seat. Around Jamie’s bench bluebells peek, it is that special time. All across this wood the lilies push through. All around us life is returning, our side of this earth is coming closer to the sun, and wildlife is responding.

Edward Thomas, a poet made famous, really, by the success of Robert MacFarlane’s The Old Ways and sense of invigoration given to the subject of nature writing, wrote about the Banstead Downs. It is only because of reading Macfarlane’s books that I know of Thomas and for that reason that this time of year, when bluebell leaves threaten to reveal flowers, when the earliest pipings of blackbirds don’t quite progress to nightly songposts, reminds me of his poems. I have never truly got on well with his style, but Macfarlane’s success is the ability to bring you closer to the lesser known authors, walkers and naturalists. The line ‘Spring is being dreamed’ is one that is quoted across media formats at this time of year. It perfectly encapsulates that rough and wearied time when winter has bitten in and bitten long, but spring’s presence is unmistakable.

You can feel it in the movements and actions of birds, the great tit, chaffinch, blue tit, tree creeper all singing and moving across the wood. The consensus is growing. The hornbeam’s branches look different to the way they were two weeks ago, as the buds begin to break with their usual slowness. Small clusters of leaves spit from elder branches, hawthorns are never too ready to shift with the season. Throughout Banstead Woods large oaks stand in stoic silence. There is no hint of a leaf, their fistfuls of buds, many of which will never be needed, remain golden brown and closed. I remember last year seeing the tiny red leaves of oak coming out months in advance on the 25th January in south London, but this year there has not been the mildness to tempt the oaks out. 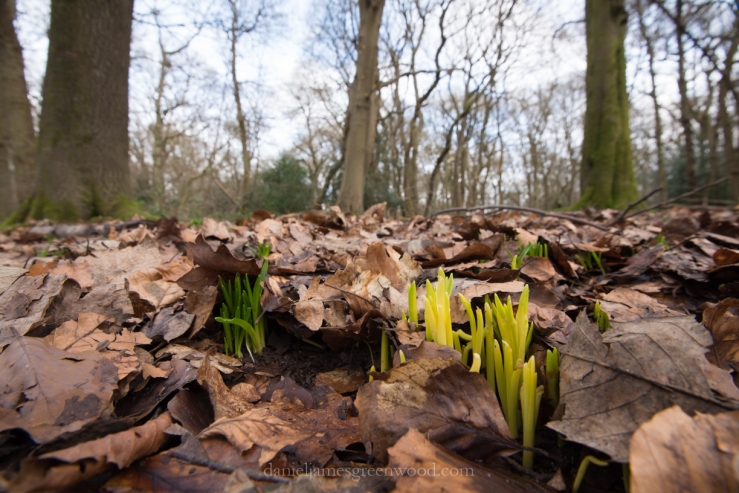 These oaks, along with beeches, hornbeam pollards and mighty sweet chestnuts, suggest this wood was once more open, lighter and more intensively managed. These trees bestow a grandeur not quite felt in other woods I know along the North Downs, even the mighty beeches of Devilsden Wood. Here the trees are all on the plateau of Banstead Downs, their scale is not reduced by the steep slopes of the many valleys that cut through this chalky landscape. Here storm Doris has broken limbs and split trees, several by gusts blown along a ride that cuts widely through. Sometimes you have to squirm through branches to carry on.

I pass a man with binoculars and ask him of hawfinch and lesser spotted woodpecker, two birds that are rumoured to be present here. He has black curls with a touch of grey and says he has never seen them but ‘surely they must pass through’. He exhibits a sense of contentment in what the land holds for him this afternoon. It marks the end of Banstead Woods, signalled by a family passing, booted and offering a greeting as they make their way inside. At the wood’s edge the landscape opens out, a few of the typical farmland oaks stand in the centre of the field and along a hedgerow boundary. I follow the path along the wood’s edge where crumbling oaks and beeches dominate, with laurels and rhododendrons creeping in at their toes. 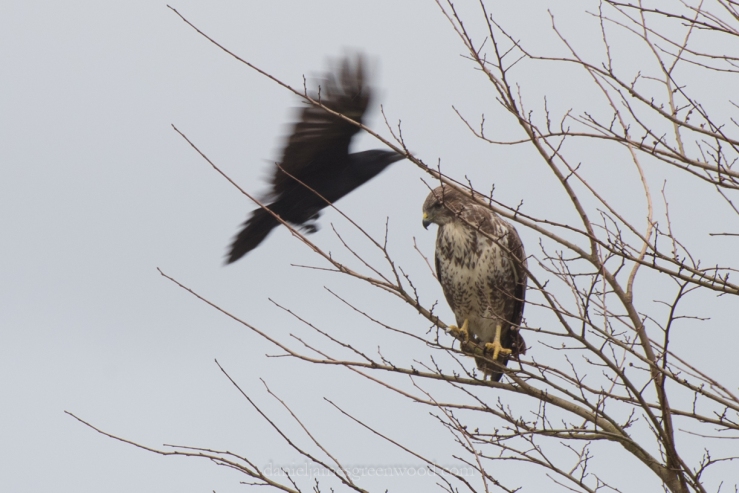 At nearby Canons Farm a buzzard perches in branches, mobbed by crows, stirring starlings, sparrows and finches to leave their feeding until later. Above a lane enclosed by a close crop holly hedge birds explode across the grey sky, the buzzard following them in a blaze of alarm calls. Following the road round past a small clutter of houses where a man revs his van and reverses out, its emissions pungent, the buzzard perches in the branches of an oak. In the distance jackdaws roost and break in the tops of trees, closer at hand a crow swings low and short of the buzzard. It is unworried by the attention, taking its time, waiting for the right moment to move off over the fields again.

Tracing a path through leafing croplands that lead into the wealthy suburbia of Kingswood, the prospect of spring has been sidelined. It rings true – those who have no closeness to or desire to venture into woods or landscapes of the less manicured kind, can have little sense of the changing seasons. Treading the verge on route to the train station beside mansions with static laurel hedges, four cars and paved driveways, I can guess what Edward Thomas valued more.

1 thought on “North Downs diary: In Banstead Woods the consensus is growing”