On Saturday 23rd March 2019 I attended the People’s Vote march in central London. The march was attended by over 1,000,000 people, the biggest ever pro-European Union march in history. 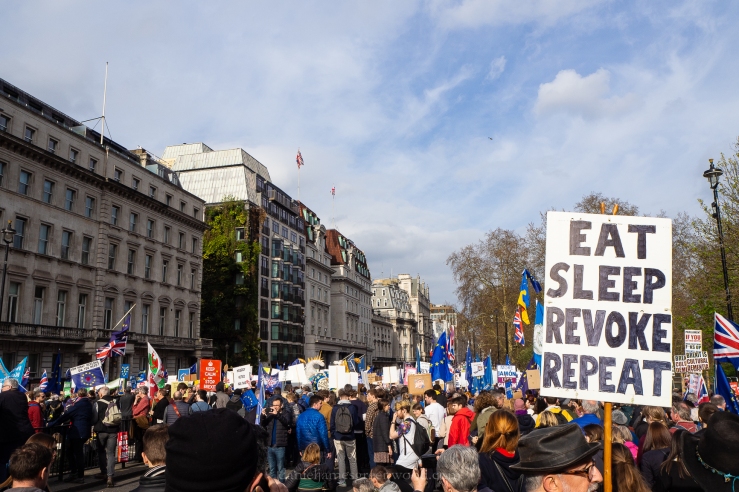 The march came at a time of growing public disillusionment with the government’s handling of negotiations with the EU.

A petition calling for Article 50, the mechanism that counts down to Britain leaving the EU, to be revoked had been signed by 5,000,000 people at the time of the march. The theme of ‘revoke’ rippled across placards throughout the walk. 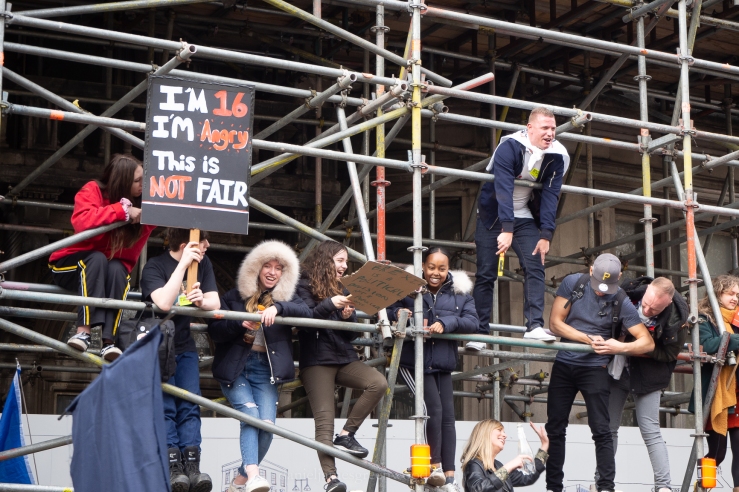 There were a lot of young people at the march, people of all ages were represented. The result of the referendum in 2016 has been a catalyst for people who were under-18 at the time to make their voices heard. The placard above gives the sense of how some young people feel about their lack of a say in the process.

The catastrophic process of Britain negotiating to leave the EU has galvanised a lot of people to campaign for change but they feel that government is not listening. Despite Theresa May’s references to issues other than the referendum in that fateful TV interview, toxic party politics and the usual haze of anti-European politicians has settled over the airwaves once more. Politicians are failing young people and it will come back to haunt them in the decades to come. 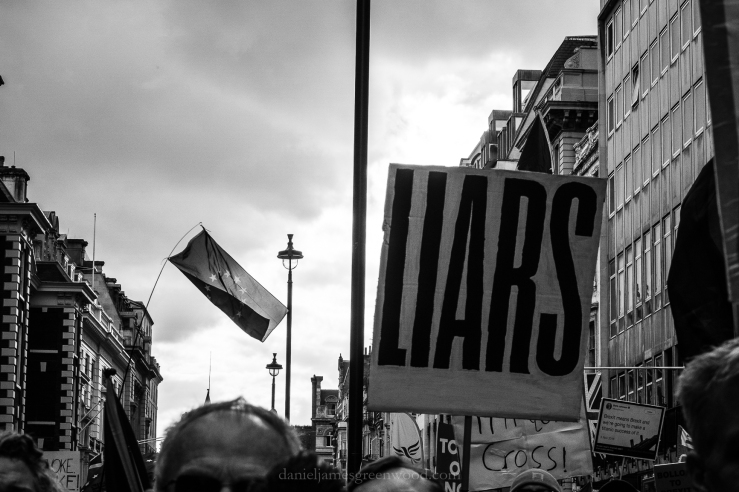 There is a strong sense of anger about the lies of the anti-European campaigns and also the shambolic failure of those leading the Remain campaign. People do not understand why more is not being said about illegal activity undertaken in the referendum campaign in 2016. 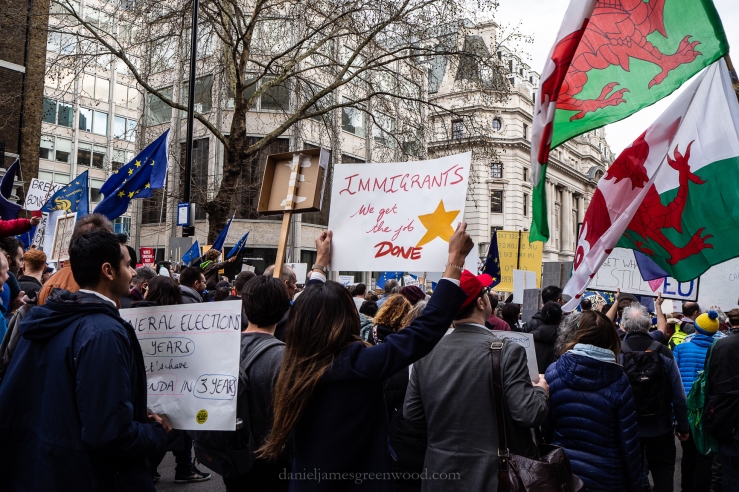 The convergence of political and cultural messages was seen in many of the signs, like the one above which references the musical Hamilton: ‘Immigrants – we get the job done’. Politicians have failed to highlight the fundamental role that immigration has in UK society. Britain is a nation of immigrants, from the Windrush generation to the Anglo-Saxons, Romans and the first people to set foot on our wild island before it became physically separate from Europe, 10,000 years ago. Recent political events, combined with inadequate social media policing and xenophobic newspaper reporting have allowed racist, far-right voices to be heard once more.

Alongside the anger was the ‘good old British wit’, with plenty of references to tea and mild disquiet: ‘I’m quite cross!’

There was colour and character to the march. It was a chance for people to express their love for the European Union creatively.

This man’s hat drew a lot of attention. It is a surreal union of Theresa May and Donald Trump, with bare plastic bums at the back. 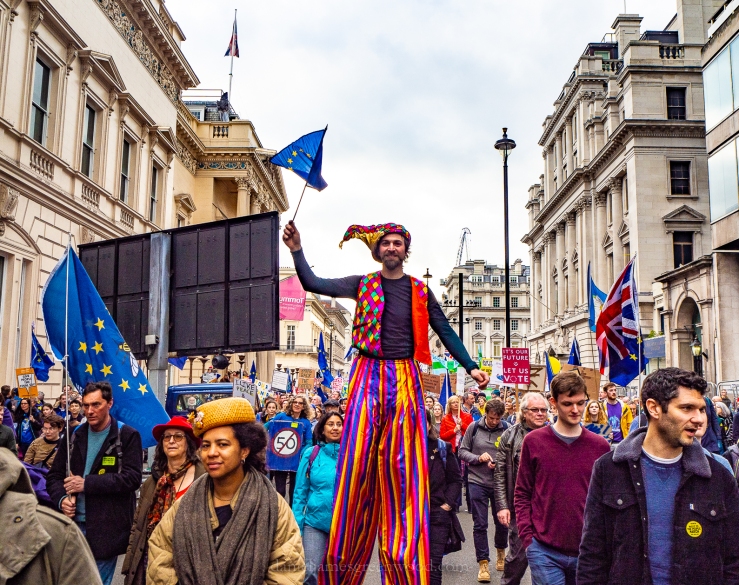 This man on stilts was interacting with the crowd around him, much like many others who participated in costume.

In terms of creativity, few creations drew more attention and phone pics than this group. 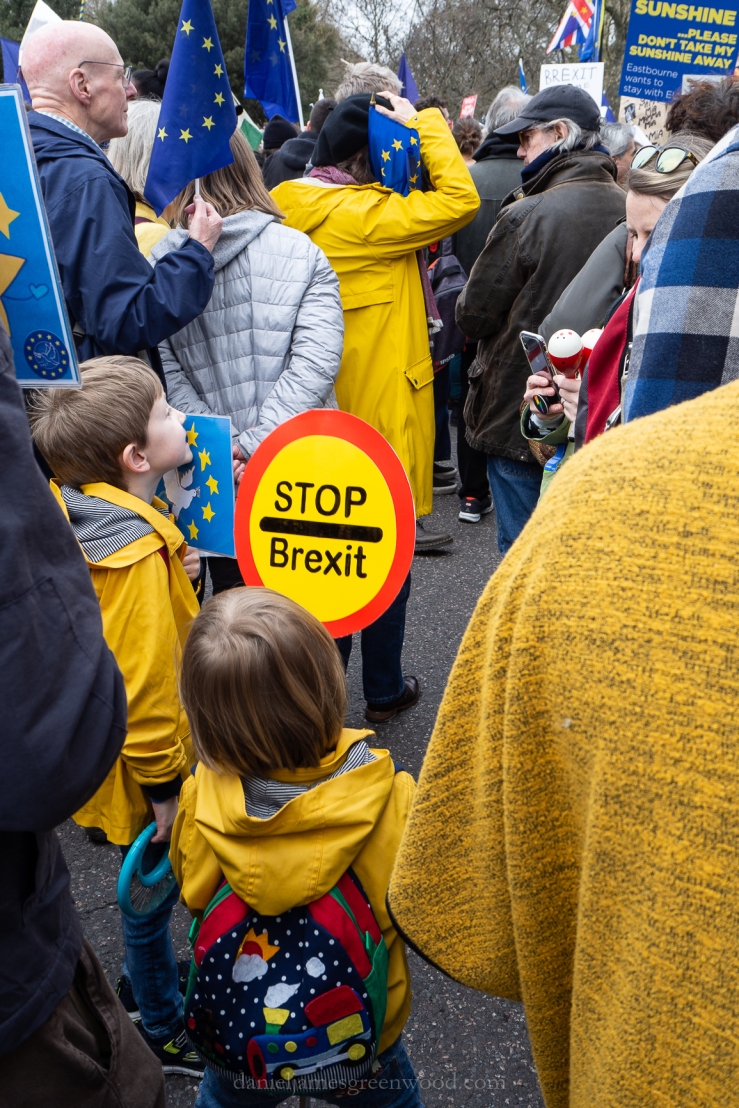 What I felt most encouraged by was the sheer diversity and age range of people. This whole issue has affected everyone. What is encouraging is that young people, even children as small as those seen here, are aware of the issues and wanted to take part. The fact they could do so in comfort gives a sense of a movement that is open and good, the anger measured and directed in peaceable and often witty terms. 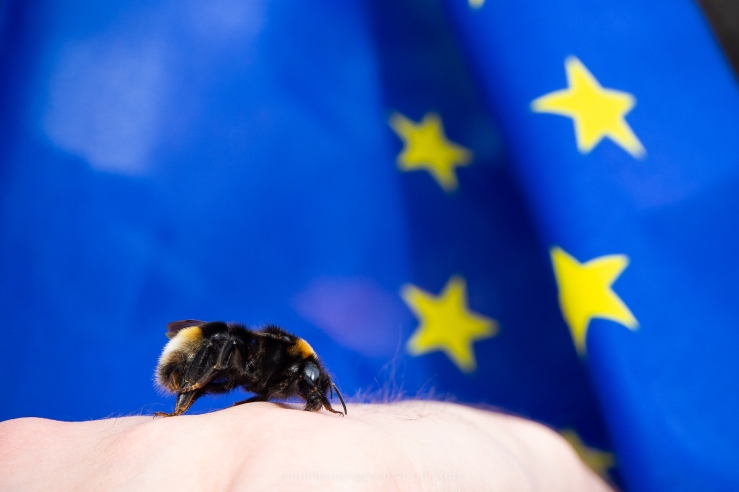 In 2016 my main motivation for our continued EU membership was the role it has played in protecting our wildlife, especially in banning bee-killing pesticides. This was done against the wishes of our own government initially, but who have now accepted the need to do so. During the march this bee rested on my friends hand to get some warmth. When the time was right, off she went out over the heads of the many thousands around us who had gathered to make their voices heard.