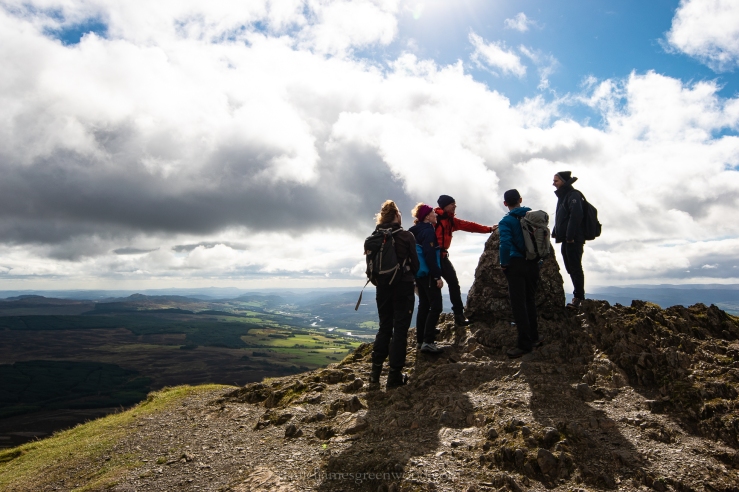 For another week the Covid-19 pandemic is keeping me away from the woods and therefore the shrooms. This fungal breaking news desk has run out of scoops, so it’s more like a sports channel airing classic re-runs.

I had been intending to post about some fantastic fungal hiking experiences (sounds weird) from a 2018 visit to Scotland but work and life stopped me. I have three hikes to share with you which should get you through the next three weeks of lockdown. I do hope anyone reading this is doing well and that you’re following the guidance.

These posts remind me of my uncle Joe Reilly who passed away in November. Joe was a Glaswegian by birth who, along with my aunt Marg, introduced me to some of the most beautiful places the UK has to offer in Perthshire, among so many other gifts. I would visit Marg and Joe in Perthshire as often as I could, often in autumn when going to meet my hiking companion Eddie (seen here) for a jaunt in the Cairngorms.

Joe fell for fungi like I did in recent years and I will always miss his WhatsApp messages with mushrooms he had found on Perthshire walks. We miss his thirst for life terribly but carry it on just as he did.

Last week I was sharing fungi found on a walk around Clunie Wood in Pitlochry.

This week I’m reminiscing about a hike from Pitlochry up to the summit of Ben Vrackie accompanied by my friend Eddie. Below the tree line, a pleasing range of fungi were found.

The walk leaves the town of Pitlochry and heads up through suburbs. This manicured field had a rowan so heavy with berries it looked like it was falling over. I have never seen so many on one tree.

The day was warm and while I waited for Eddie to change out of his underlayers behind a tree I scoped out some shrooms in the first piece of woodland we encountered. I’m not sure what this species is. I found them pre-plucked at the side of the path.

Further up through the woodland this common puffball was sitting among the leaf litter. This has to be one of the most common woodland mushrooms to find in the UK. This is always a good sign of what is to come on a longer walk. Puffballs can be an indicator of a good amount of fungi on the ground.

The woodland broke into something more open as the moorland and hills approached, with large birch trees growing along the edge of the path. A tree stump held this gathering of yellow staghorn. I asked Eddie if he would help to add something to this pic! Probably one of my fave fungi photos.

As we ascended towards the winding set of steps that take you to the top of Ben Vrackie, we saw two golden eagles floating above another hill nearby. This was only the second time I’d seen golden eagles in the UK. They are massive! 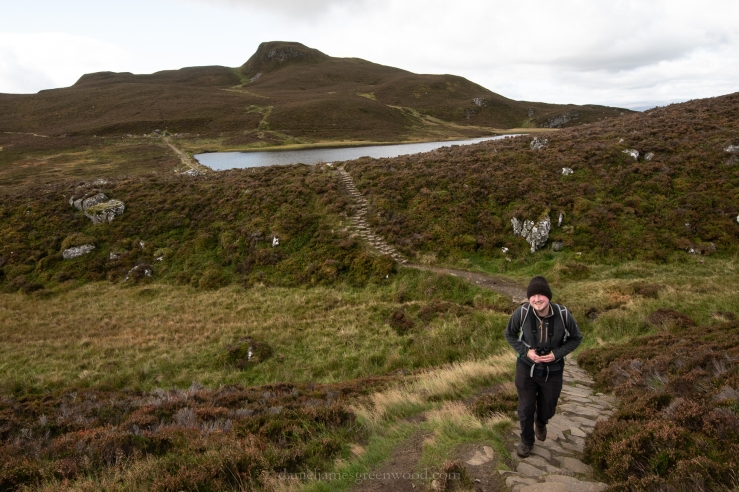 The fungi in these areas thins out to small species connected to the habitat and the odd common species which is particularly good at spreading its spores and growing in a range of habitats (stuff like sulphur tuft on dead wood). For those who don’t know, this is heather moorland. Short on trees so not the richest place for fungi. Then again I haven’t spent enough time looking. 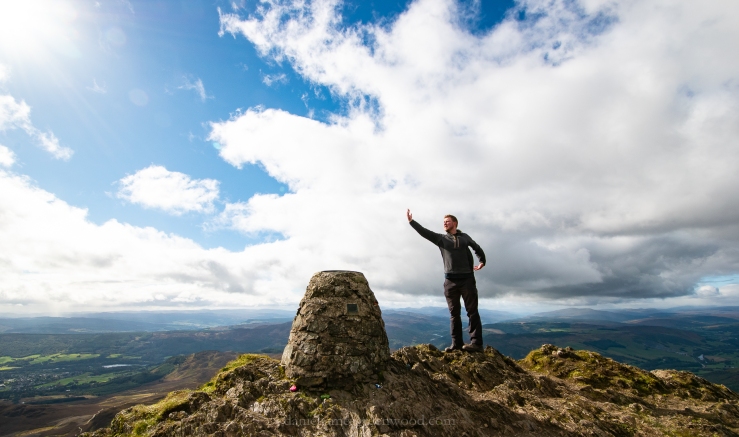 This is a popular walk from Pitlochry. Lots of people were coming and going from the 841m summit of Ben Vrackie. Here is Eddie trying to get some soul signal from the gods. He failed.

The views north into the Cairngorms were beguiling. Landscape photographers would have appreciated the range of weather available and the clouds which gave extra character to the views. While we sat up here eating lunch, a man and his two sons reached the top. He told them a story of when he had climbed a hill with £200 cash in his pocket. He knew it was a bad idea and half way up the money slipped out of his pocket and away into the landscape. He salvaged £20. His boys told him it had indeed been a bad idea. 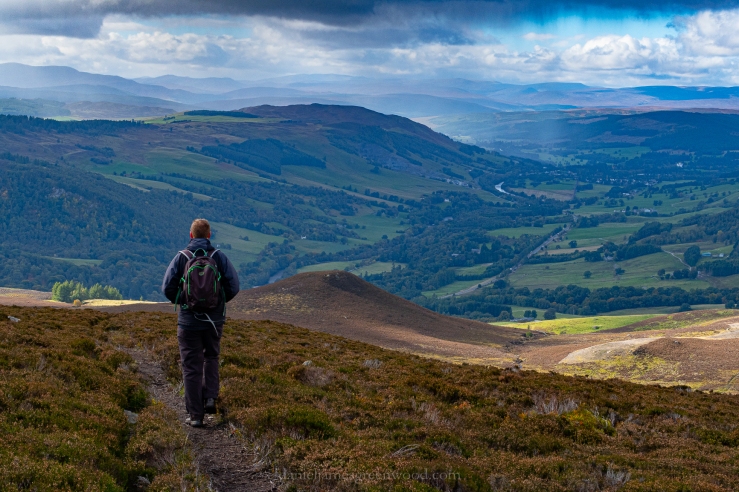 Rain following the River Garry through the valley from Blair Atholl. This photo has been enhanced to bring out the distant peaks and rainfall. 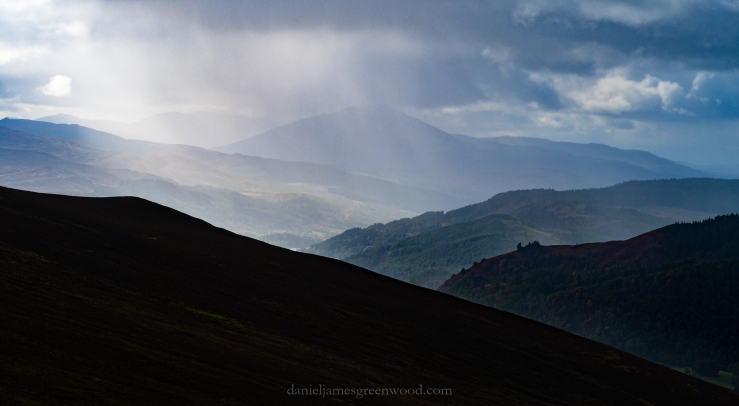 Rain arriving in the hills. 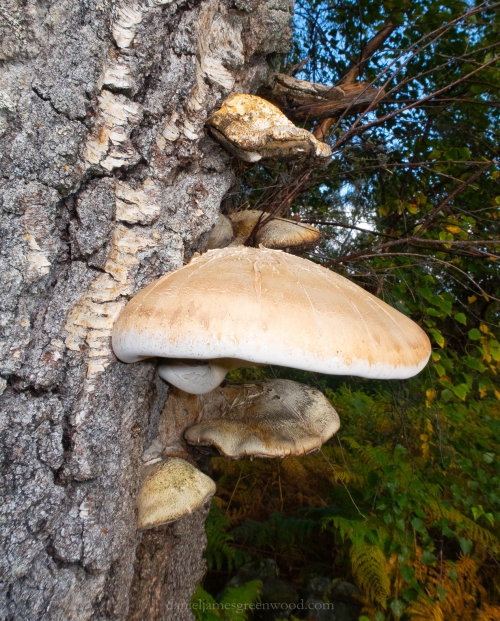 Descending back down through the tree line, we took the same path back. It’s interesting how you see things so differently when you walk a single route in another direction. Here was a very large birch polypore, also known as razorstrop fungus. It is a natural controller of birch trees and is possibly one of the easiest species to find.

On the way back we found what I think is a birch bolete. It was reaching out from the path edge and had already been nibbled on by slugs. A real treat to find something like this.

It was a pleasant surprise was to find a chantarelle, one of the most sought-after edible fungi. This one had already been plucked (I think).

I’m really not sure what species these shrooms are, but they were a nice find.

On the way back we visited this beautiful pub, the Moulin Hotel, with conifer beams holding up a balcony. It dates from the 17th century.

The rain was coming and going throughout the afternoon. It reminded me why Scotland is so good for fungi. There is a high level of rainfall, large areas of woodland and acidic soils which seem so good for mushrooms.

Next week it’s fungal royalty in the Cairngorms.