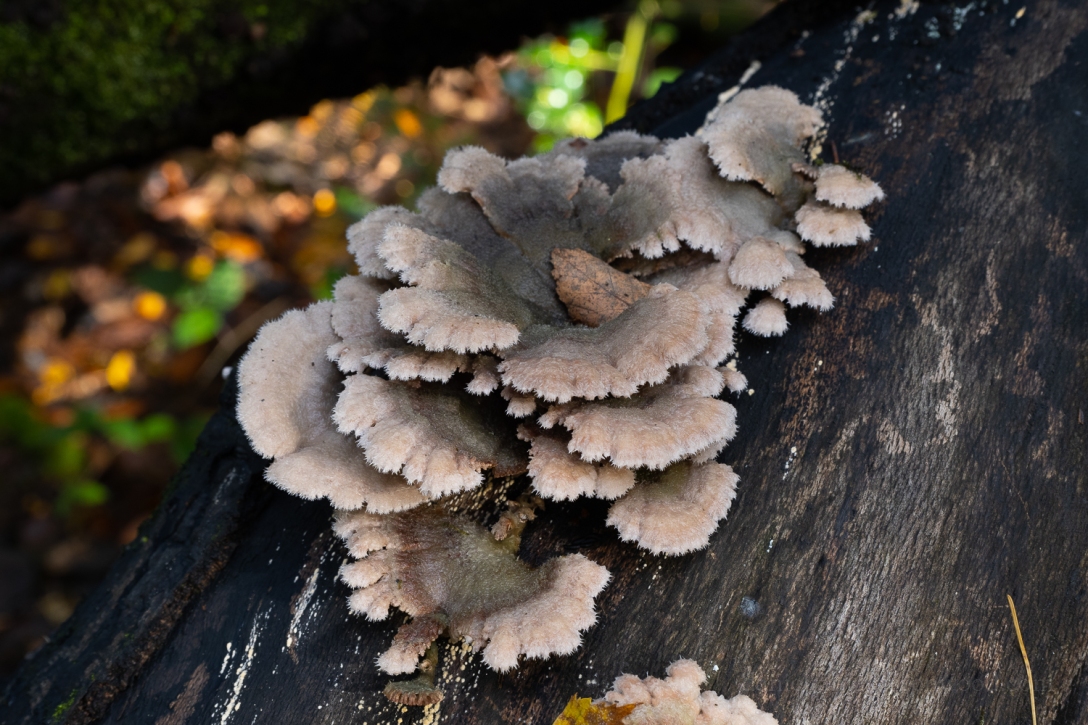 I encountered splitgill fungus again at the end of October. It’s a very attractive species due to its interesting ‘split gills’. But it also has a fascinating biological story. I considered outlandish titles for this blog post, including ‘the fungus that has 20,000 sexes and sometimes lives in humans’. After researching a bit more, that 20,000+ figure was so common it looked like clickbait. I have standards, people.

Visually splitgill fungus is known for its vein-like gills, as seen in some of the images here. Otherwise it’s known for its potentially serious impact on the lungs if you’re ever incredibly unlucky enough to have it make a home in, well, you. As Covid-19 has reminded us, despite our attempts to lord it all over nature, we are a habitat in ourselves, with fungal spores also being present in our bodies as they are pretty much everywhere in the environment.

The splitgill apparently has 28,000 sexes, which may not be as remarkable as us simple humans think. I don’t have the space to go into sex in fungi on this blog, it’s complicated, but it’s also not the same as it is for humans.

The splitgill is also perhaps the most widespread fungus in the world.

It’s a species I most often find on deadwood, usually on fallen beech trees in Sussex. It’s particularly visible in the winter months.

One of the best articles online about the splitgill mushroom is this one, from February 2000! I was a teenager just encountering chat rooms then via my parents’ 56k dial-up modem. Coincidentally, the author of this blog, Tom Volk, passed away in recent weeks. He obviously has contributed a great deal to people’s enjoyment and understanding of the fungal kingdom.

As mentioned earlier, splitgill fungus is also known for some extreme medical issues in isolated cases. Not that you should worry about it:

This is a very interesting YouTube video on the Learn Your Land channel. It lays out all the information about the fungus affecting people medically, and some examples, in a much more interesting way than I can here. Do have a look if you want to know more.

Latest from the Blog

This is not a fungi post. If it’s anything, it’s probably closer to animals. It also may exhibit signs of memory despite not having a brain. Sounds like you’re in the right place.

A new year walk on a very busy stretch of the West Sussex coastline. Proof, if you needed it, that I can do watery blogs.

A walk around a wet woodland reserve where the river ran free of its banks, merging among poplars like something from prehistory (i.e. no Internet).