For another week the Covid-19 pandemic is keeping me away from the woods and therefore the shrooms. To be honest though, my town is so deserted at the moment that I am kind of hoping some shrooms start popping up soon in the paving. Especially considering there is rain coming today.

I had been intending to post about some fantastic fungal hiking experiences (sounds weird) from a 2018 visit to Scotland but work and life stopped me. I have three hikes to share with you which should get you through the next three weeks of lockdown. I do hope anyone reading this is doing well and that you’re following the guidance.

These posts remind me of my uncle Joe Reilly who passed away in November. Joe was a Glaswegian by birth who, along with my aunt Marg, introduced me to some of the most beautiful places the UK has to offer in Perthshire, among so many other gifts. I would visit Marg and Joe in Perthshire as often as I could, often in autumn when going to meet my hiking companion Eddie (seen here) for a jaunt in the Cairngorms. Joe fell for fungi like I did in recent years and I will always miss his WhatsApp messages with mushrooms he had found on Perthshire walks. We miss his thirst for life terribly but carry it on just as he did.

This week I’m reminiscing about a great walk in the wooded hills of Pitlochry.

The walk was on a Friday afternoon from the door of our guesthouse in Pitlochry but can also be done from Pitlochry railway station. It’s a stunning place, close to the southern border of the Cairngorms National Park. My friend Eddie lives in Glasgow and his journey was a wee bit quicker than mine from Sussex. Above you can see Eddie not at all incongruous in the landscape All these pics are taken with the amazing Canon Powershot G7X MII in RAW format and processed in Adobe Lightroom.

Scotland has deliciously wet and humid woodlands which in some parts constitute what is affectionately known as ‘Celtic Rainforest’. This is my habitat, the milder temperatures and shadier conditions far better suit my Celtic biology (which is not actually something that exists in Science).

These birch trees were host to large hoof fungus brackets and many foliose lichens. These are commonly found on the acidic soils of heather moorland that covers so much of the Scottish Highlands. 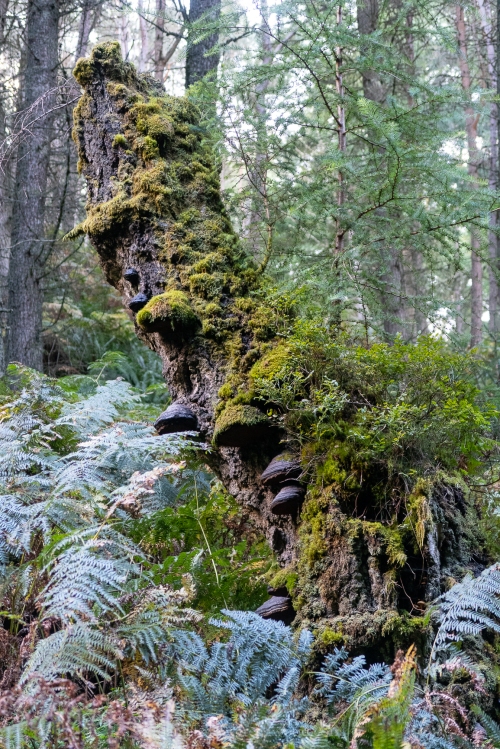 These dead standing trees are a vital source of biodiversity in woodlands. They are the thing we have lost but are slowly, very slowly, returning to the landscape thanks to sensitive management. 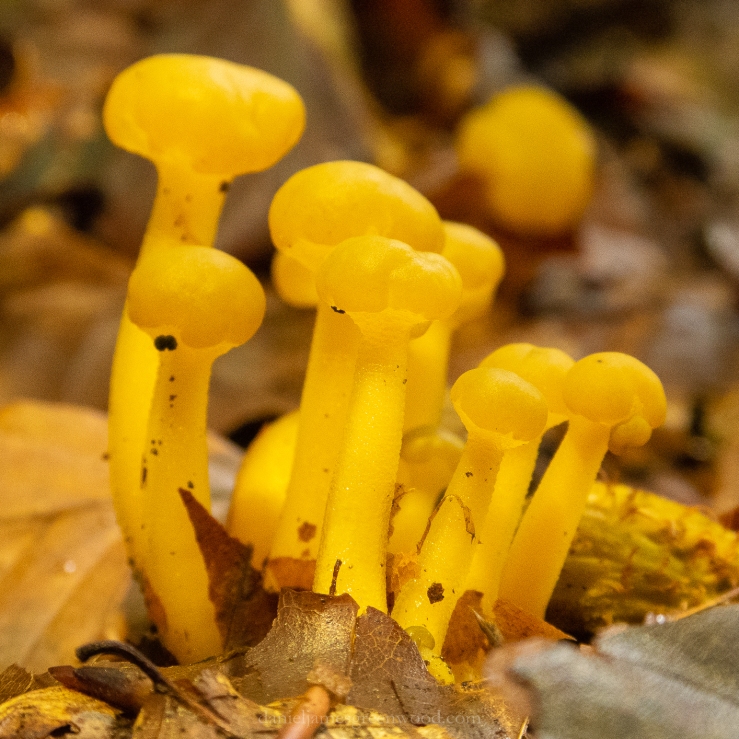 In Clunie Wood I found my first ever jelly babies. These are a bizarre species that do look like the sweets. They were growing in large numbers under shade in a wet area alongside the path. 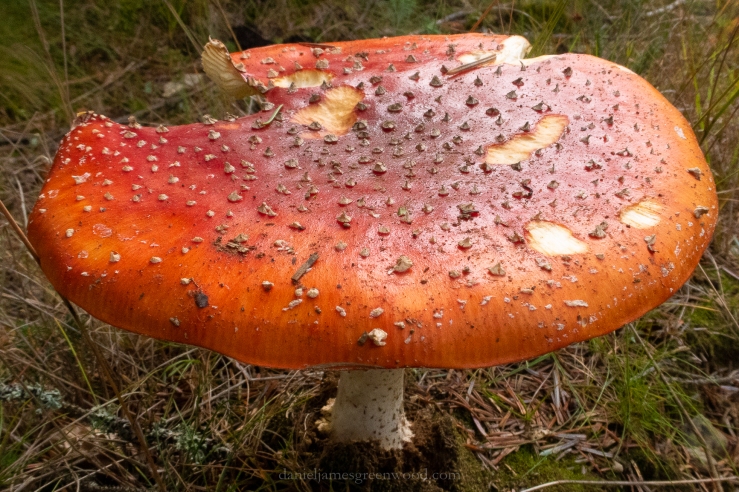 At the edge of a plantation we found a huge fly agaric.

Here is Eddie getting a pic which gives a sense of scale. September seems a good month for fly agaric in the Highlands of Scotland.

The conditions were perfect for fungi and these beautiful bonnet mushrooms were alongside lichens on a tree stump.

This quite hilarious clump of mushrooms (they were growing from one small stump… had to be there) are probably a type of honey fungus described in Latin as Oystoyae. 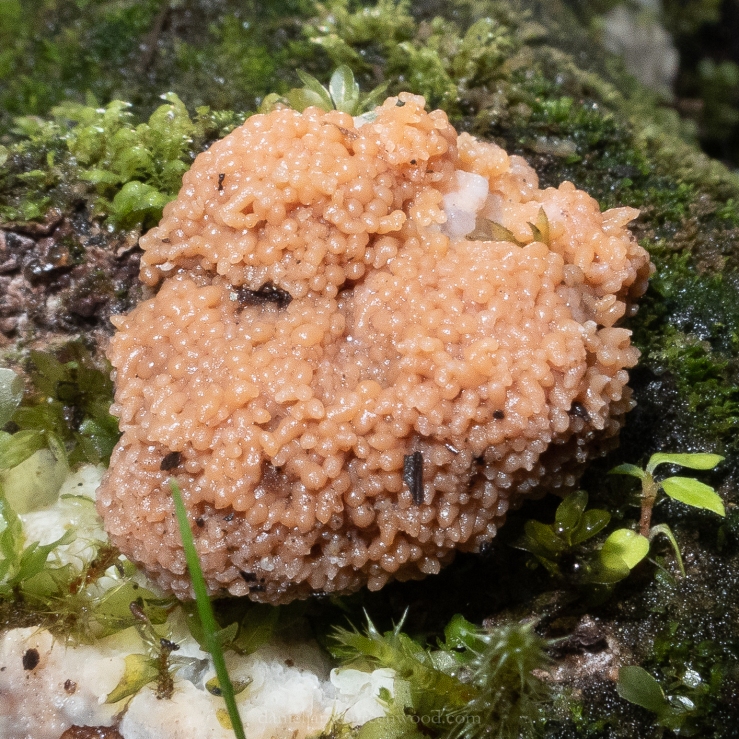 This cheeky slime mould was another sign of the exceptional conditions with the mixture of broadleaf woodland and conifer plantation providing lots of moisture. 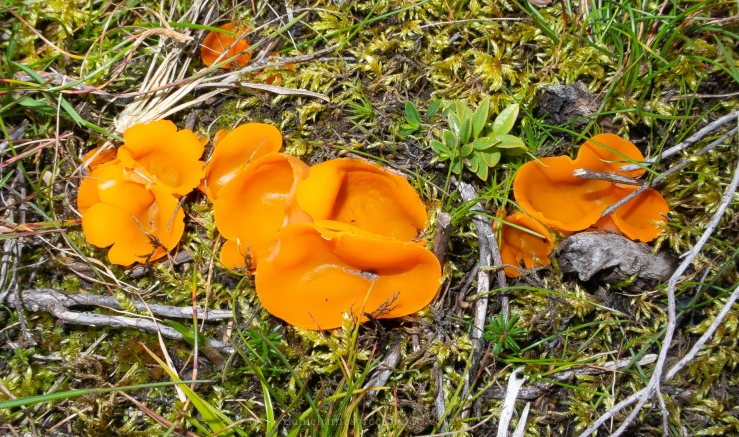 I always think orange peel fungus is some kind of plastic pollution. Having worked in urban nature conservation it reminds me of litter picks pulling old bits of traffic cone out of the soil! 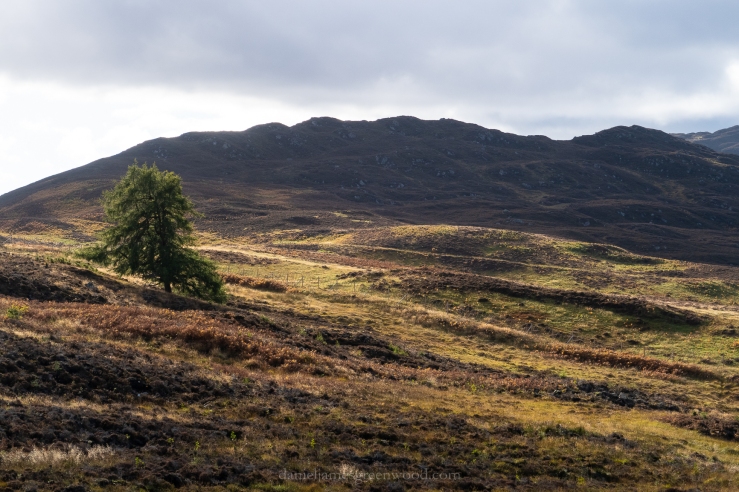 At the edge of the woodland the beautiful heather moorland appears and views expand into the Grampian Mountains of the Cairngorms National Park.

Thanks for reading and keep dreaming!