I went on a bike ride to the edge of a large woodland complex on Fungi Friday Eve (AKA Thursday). I went in hope of finding that mushrooms, after a fair amount of rain, were bursting forth from the soil, fresh and bright, ready for their close up. As usual I was wrong. There was pretty much nothing, not that I managed to make it into the best areas, it’s quite a trek. I did find some fungi though, a cluster of giant brackets that are there all year round:

This is probably artist’s bracket or something similar. They live on decaying wood in living or dead trees. They are an important controllers of tree species and contribute therefore greatly to tree diversity in woodlands. Unlike what you might think, their presence does not always mean the tree is dying or that they are harming the tree.

Birch polypore is a nice example of a tree-controller, a species which is commonly seen on birch. It has a fantastic scientific name – Piptoporus betulinus! It’s also known as razor strop, probably because people once used it to sharpen their knives (which were a day-to-day essential) in the way that you might use a piece of leather. That connection between people and fungi is one I think it’s sad we’ve lost. I wonder, is this still a living connection anywhere else in the world today?

Bracket fungi are something we’re losing from the wooded landscapes of Europe largely from the explosion of forestry in the past 100 years and an intensification of woodland management. The oldest woodlands I’ve ever been to (I know that doesn’t mean much) were covered in dead or decaying trees with large brackets. The Bavarian Forest, as seen above, was a fine example.

One reason why we have less brackets is because large trees have not been left to live their lives to the full and beyond. Most trees in forests have a target age and size, bracket fungi are a pest in those places, not that most trees would ever get to the age where substantial brackets could develop.

In the intensively managed woods of places like Czechia, it’s only a fallen tree stump that will give a home for a bracket.

Possibly the most bracket-rich landscape I’ve visited is Białowieża Forest in Poland, famed for its ancient stretches of woodland and rich diversity of tree species, said never to have been logged. Not even by the Nazis invading in the Second World War.

From experiences of visiting these rich woodland landscapes, a sign of brackets is often a symbol of a healthy ecosystem. The brackets are softening wood inside of trees which make a greater range of habitat niches for other life.

Saproxylic invertebrates (those which live in or depend on dead or decaying wood) are the most threatened species group in Europe. Many of these insects have important, dove-tailing ecological relationships with fungi. The stag beetle is a nice example, a species which is born with its own fungus used to decay wood in its wood-boring larval stage (we’ve all been there). Woodpeckers are also dependent on this wood-softening created by bracket fungi.

I read this week that furniture behemoth IKEA have been linked to illegally felled beech woodlands in the Ukrainian Carpathians. They are selling products in the UK made from timber felled with a licence approved by the FSC but which is in fact thought to be illegal. IKEA has been here before, not least for accusations of using timber from ancient woodlands in Karelia, a region in northern Russia. For the recent Ukraine story, please watch the excellent (and witty) Channel 4 report here:

The Carpathians are a mountain range that cut through Europe, fizzling out in Czechia, reaching their most epic heights in Romania. They are one of the most incredible landscapes Europe has to offer. They also cross through the Ukraine, where the high beech woodlands are some of the oldest in Europe. Recently some of these woodlands were designated as a Unesco World Heritage Site. As so often is the case, outlying areas can be prone to exploitation through illegal forestry operations. 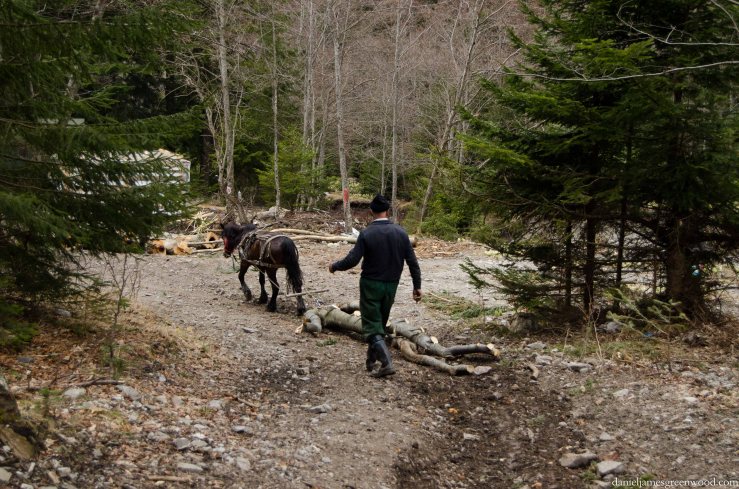 In 2015 I visited the Romanian Carpathians. My friend and I hiked out of the Transylvanian town of Sinaia and into the mountains. There we witnessed the logging of beech trees using horses. It was amazing to see, and something far more ecologically kind to a woodland, rather than using heavy machinary that destroys the soil (and all the fungi in it). We can only presume this was a legal operation. However, illegal loggingin in some of Romania’s most important woodlands has become so serious that rangers and woodland protectors have been murdered for attempting to stop it. The EU has to do more, as it did in protecting Bialowieza Forest from ecologically-illiterate forestry.

We are dependent on fungi and woodlands to make our world inhabitable. There need to be core areas of woodland which are allowed to follow cycles which are not interrupted or undermined by economic activity like intensive forestry. We can play our part in conserving things from afar by knowing who we are buying products from and where they originate from. That said, it’s not made any easier for the woodland or the consumer if ancient beech woodlands are being converted to fold-out chairs under a Forestry Stewardship Council certificate.