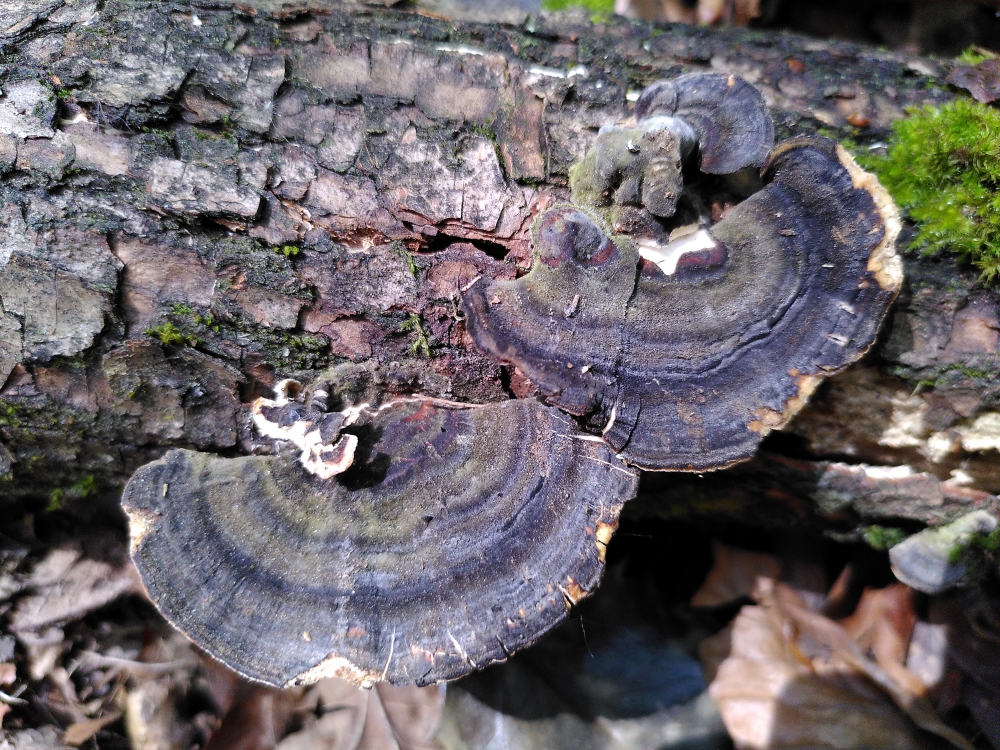 It’s been such a dry spring that I’m starting to wonder if there are any on this planet! They’re probably not on Mars but it’s a nice idea. Here’s more info on that story.

While I have your attention, allow me to explain some changes to the way this blog works. I am moving from the fixed days of #FungiFriday or Macro Monday. If you’re a regular reader you may have noticed that already. Now I’m making a monthly podcast, I need more flexibility with posting, and I actually sometimes have more to post about on both macro and fungi than just once a week. Also deadlines of Thursday and Sunday are not ideal!

Back to life. After a barren period (no morels for me), I did manage to find a couple of species on a long walk the other day, hiding away in the shade of a country lane. Get ready for phone pics.

This is turkeytail, one of the most common fungi you can find, distributed across the world. It is sometimes used to make tea and extracts are used for their anti-cancer properties.

In Sussex we have recently had rain after a very dry April indeed. If this is climate crisis related, it means that the British tradition of April showers could be confined to the past. Once again, wildlife can point to wider issues in the environment which we are often oblivious to.

In that not-quite-fungi-but-probably-animal category are the slime moulds, of which I found one on the same walk.

This is a great advert for fungi and slime mould because it’s so blatant. It’s a species you see cropping up on social media time and again, with many people intrigued by its presence, often on deadwood. It’s false puffball, a slime mould. Looking at iNaturalist, April seems to be its peak month.

In other news, I’m giving a fungi talk online on Tuesday 18th May at 19:00 (London, UK time) for Bell House, a charity that supports people with dyslexia. There is a suggested donation of £5 towards their work. You can see the full details and how to book here.

In Sussex we’ve been treated to snow and ice, followed by a sudden jump in temperatures to something spring-like. For mushrooms, it must be a confusing time. It definitely is for this manshroom.

Today’s post is brought to you by phone pics. I’ve been a bit confused by messaging around lockdown laws in the UK, where it’s unclear if you can do photography at all. It’s just not that important, though. People are suffering beyond my comprehension and in England our National Health Service is under incredible pressure. I’m lucky and I do not take for granted the privilege I have in being able to access the countryside within a few miles of walking.

For the benefit of international readers, in England we’re supposed to only do walks from home or those involving a short journey. I’ve not been to my usual local woods in a while, but I can get to the edges of them or at least some mature, tree-lined avenues within a couple of miles whilst keeping away from other people. The standout fungus during walks this winter has been yellow brain, Tremella mesenterica. It is such a beautiful fungus and so unusual to see something so bright in the dark scenes of an English winter.

There’s a reason so few soil-based mushrooms are found in winter – the ground freezes and most fungal hyphae are unable to move through the frozen substrate. Fungi that grow from dead wood or other material can continue to do their thing. This rather pooed-upon bracket fungus is known in the UK as lacquered bracket. On social media you see lots of American accounts raving about reishis. There is even a website dedicated to the species under that name.

I wrote a little bit about turkey tail last week, and this week’s post is late because I entertained the idea of a turkey tail post in itself but eventually didn’t have the time. I think this is turkey tail. It’s quite a variable species so if you don’t know the basic features, can be confused with others. I’m it that camp.

Jelly ear has to be one of the species people notice first. It was my first ever #FungiFriday post! It looks like a body part, is tactile, non-toxic and grows on a common European tree – elder (Sambucus nigra). It’s also very common in urban woodlands and green spaces, which means it reaches a wider audience.

Quite similar to turkey tail is the Stereum family. This is probably hairy curtain crust (yep) and is very common in these months when rainfall is high and temperatures are hovering between 5-15 degrees Celsius.

On a longer local walk I found this veteran beech tree. It had a massive bracket fungus growing at its waist. This fungus had become very woody in texture, which shows how they can survive cold weather. I’d like to get back to see it when it starts to build up its next layer. You can read more about bracket fungi here.

The lackey in the Cuckmere valley 🐛

Nymans is one of the jewels in the Sussex Weald, with amazing views across woodlands towards the South Downs. I usually photograph less formal landscapes than National Trust gardens, but perhaps I am too particular sometimes.… END_OF_DOCUMENT_TOKEN_TO_BE_REPLACED

On a recent trip to Ireland, my Mum and I spent some time at a garden centre trying to find hedging plants. Having been poisoned by cherry laurel once, and having professionally removed a lot of it, that was not on the agenda. Instead, I was looking along the lines of a good old conservation… END_OF_DOCUMENT_TOKEN_TO_BE_REPLACED

In early May I was fortunate enough to visit a chalk grassland site near Brighton with two people who knew the landscape extremely well. I had been invited to visit this area to help find early spider orchids 3 years ago but the pandemic got in the way of travelling there.… END_OF_DOCUMENT_TOKEN_TO_BE_REPLACED

Something went wrong. Please refresh the page and/or try again. 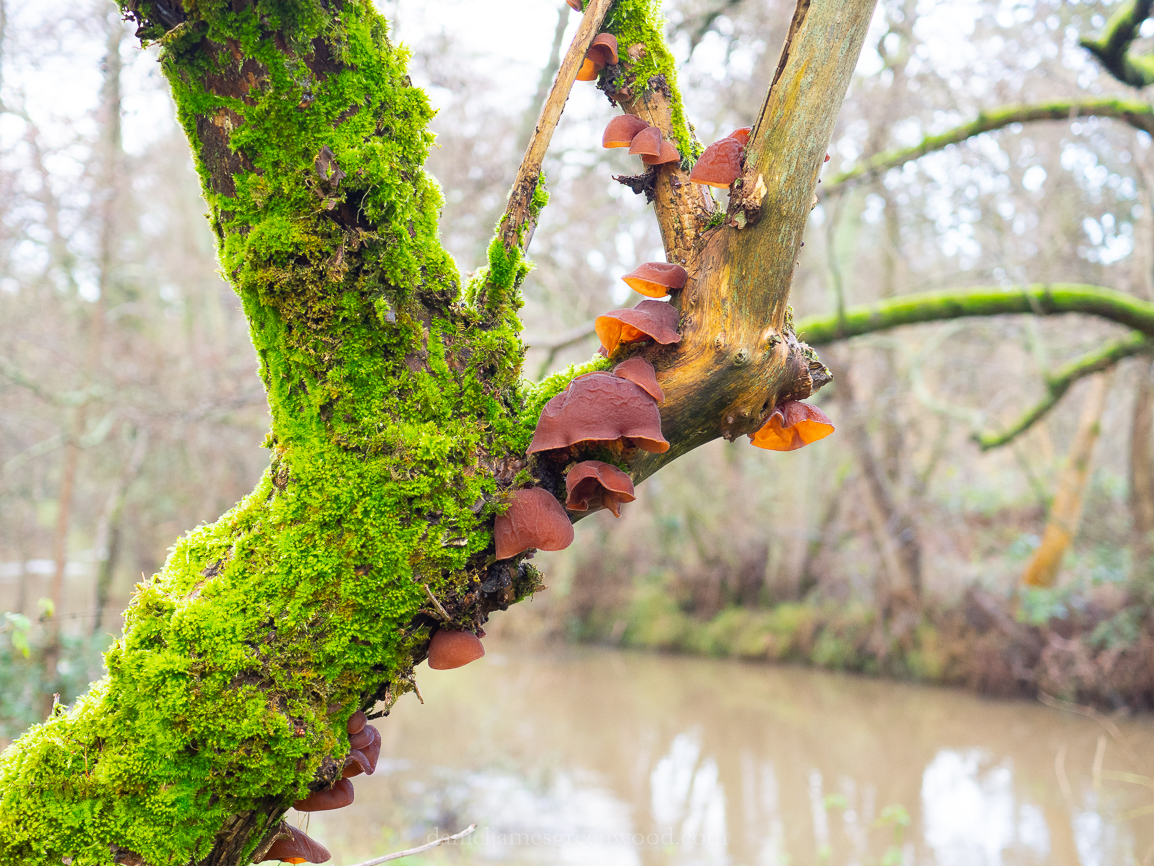 You may have seen my attempts to photograph a mushroom every week on Twitter. I have hundreds of fungi images that I want to share so I’m now going to start posting a species each week (or one I’ve seen in that week). I’m not a forager and have never cooked or picked wild mushrooms to eat. I prefer taking pics and leaving shrooms for others to see.

To kick things off, this week I photographed jelly ear. This is a common species that, like in the image above, can be found growing on elder trees. It stays on a branch all year round and goes through a process of de- and rehydration. It seems happy in the winter months.

Jelly ear once had a more derogatory or racist name. This is largely because of the Latin name (Auricularia auricula-judae) which relates to Judas Escariot and the species’s association with elder. Judas is said to have died from hanging in an elder tree but that is almost certainly impossible because it is a very soft wood. The ears are said to be a remnant of his spirit. I call it jelly ear, as do all up to date field guides.