Your Christmas gift from me is the final part of my 2021 Dartmoor mushroom trilogy, following on from parts one and two.

I hope you can have a nice Christmas and holiday. Solidarity with anyone alone or grieving at this time. Here’s to happier times.

This post is all phone pics so there is a bit of a drop in resolution and quality, but that’s not all that matters in photography. The finds here were based on a walk from the edge of Dartmoor National Park into one of the nearby towns, outside the boundary. I found some lovely species, some of which I hadn’t seen for some time.

The walk began from our hotel, passing through a slither of ancient woodland that had been planted up with sweet chestnut perhaps over a century ago. I was delighted to find one of the first hen of the woods (Grifola frondosa) that I’d seen for several years. Also – how chivalrous am I!

A nice large spread of mushrooms on an old stump in a hedgeline were this group of scalycaps. I expect these are probably golden scalycap (Pholiota aurivella).

Cemeteries are excellent places for wildlife, sometimes for rare species of plants, invertebrates and fungi. This small churchyard is no exception to that. The main reason for this is that the grasslands are cut regularly and kept open, being in a state of grassland for hundreds of years or more.

Honey fungus (Armillaria) has had quite a late start to the year in southern England. I have found it in this particular churchyard before. I think this cluster were growing where the roots of a tree once were.

Churchyards are good places to find waxcaps, a family of mushrooms that are mainly found in ancient, unimproved grasslands. This means the grasslands haven’t been ploughed up or fertilised, hence why sacred sites like churchyards are good for them. I found a gathering of small yellow waxcaps which have been identified on iNaturalist as butter waxcap (Hygrocybe ceracea). I love the gills of waxcaps, and the phone camera does do them some justice.

At first thought this very small mushroom was a waxcap but it probably isn’t. One suggestion is that it may be a type of funnel.

As witnessed elsewhere on Dartmoor the day before, I found a couple of blackening waxcaps (Hygrocybe conica). This nicely illustrates the shift from a Wine Gum yellow to the blackening stipe.

Closer to the large cedar seen in the wider image of the churchyard, there were several blushers (Amanita rubescens) dotted around the grasslands.

Perhaps the most beautiful find, and one I’ve never knowingly discovered before was bitter waxcap (Hygrocybe mucronella). If the gills of the butter waxcap were beautiful, the combination of pale yellow and orange backdrop are something else. The gills radiating towards the stipe from the edge of the cap also look to me like flames.

Thanks for reading. Extra points if you read all three posts! 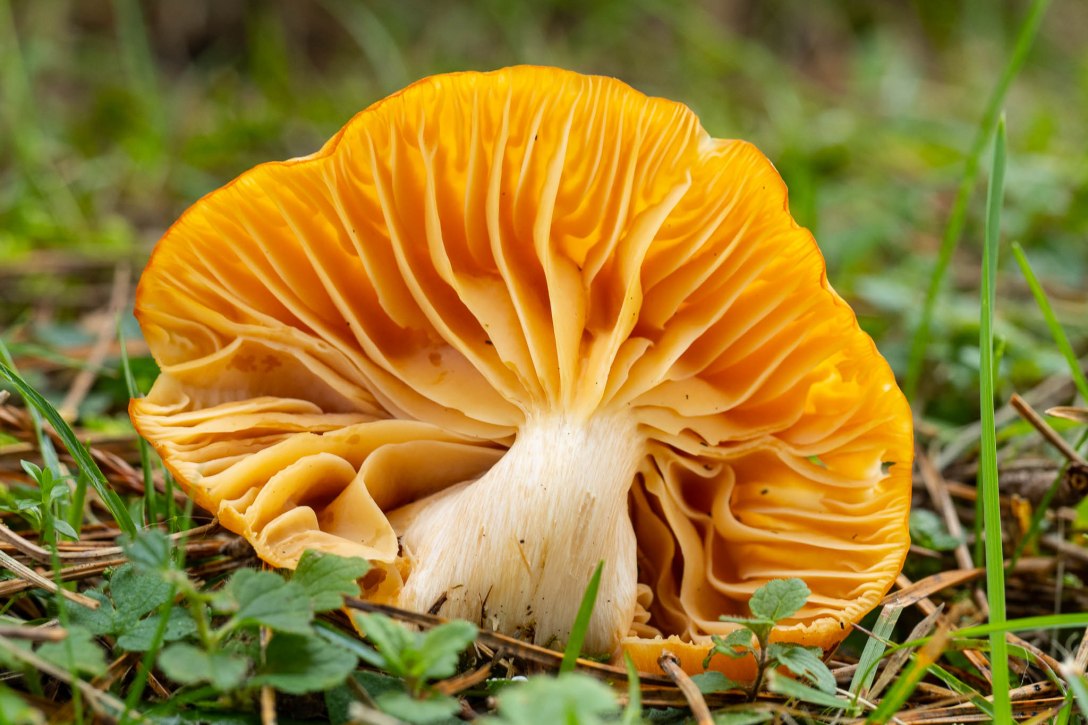 In Sussex we have now inched out of a national ‘lockdown’ and into more localised restrictions on hugs, walks and purchases. Not that fungi (if it could) cares a jot about any of these psychological blockades. They have enough on their hyphae feeding the world’s woods, trees and forests. I will admit that after seeing the mushrooms fading away into a typical ‘mush’ in my local woods (not actually mine) I had sweated on this post. Again, not literally. Temperatures are loitering around the five degrees Celsius mark (I learned this week that Celsius was an actual person) which means frost and therefore frozen fungi. Fungi are 90% water which means they can only really produce fruiting bodies above ground – it can be quite toasty in the soil, where they can remain active socialising with tree roots – when it’s warmer than this.

One thing I have noticed is that fungi are lingering longer in grasslands. Last week I saw inkcaps in golfing greens. Recently I passed a local cemetery and spotted some white mushrooms in the grasslands. On closer inspection I could see these were a white species of waxcap. Waxcaps are rare mushrooms which are largely dependent on ancient grasslands or those which are stable, i.e. not regularly ploughed up or disturbed. Among the white mushrooms I saw some stonking red ones – which iNaturalist helped me to ID as scarlet waxcap. I am put off identifying this family of shrooms because it is not always straightforward, a bit like webcaps, of which there are thousands of species, even in the nature-depleted UK.

These are gorgeous mushrooms. Cemeteries are a great place to find these fungi because the grasslands are sometimes as old as 300 years or more, do not suffer from the use of chemicals, and the lack of footfall out of respect, means the grasslands are soft and accommodating to species trying to move through them. There are lots of projects to monitor grasslands for waxcaps, such as this project from Plantlife and the very interesting charity Caring for God’s Acre.

My best find was this keeled-over meadow waxcap, fanning its gills like some feral peacock. It may have been the frost that has caused it to pose like an ancient tree, but it will probably help with the spread of its spores.

As you can see, waxcaps are incredibly beautiful fungi. If you see any on your travels please do submit species records to Plantlife or your local Wildlife Trust. You can also take a photo and submit it to iNaturalist or iRecord depending on your preference. Better still, inform the people who own the land – ‘do you know you have rare wildlife living on your land?’ – and ask them to take this into consideration when managing it.

Here’s a wider view where you can see just how big the meadow waxcap is! Those surrounding trees will not be great for the waxcaps due to shading, so for their benefit tree planting should be avoided and cutting of the grasslands is a priority.

It wasn’t just waxcaps though, I found something more suitably Gothic growing alongside a grave.

This is a species in a group known as the goblets! What a great name. I need to get myself a goblet.

It’s nearly over. Mushroom season 2020 has been a short, sharp shock of fungi in southern England. I spent some time this week scouring local woodlands and walking on the rural edges. I found little in the way of soil-based mushrooms. To me this is a sign that autumn is over and winter has made its claim. We’re entering into the Tier 3 of seasons.

A good sign that mushroom season is over is when you are only able to spot very small species on moss or in tree bark. There are micro-climates in trees and mosses that allow for humidity and the fruiting of some species. This is a moss bell in the family Galerina.

I did find some mushrooms on the woodland floor but they were mostly mush, collapsed in on themselves after heavy rain. I found one emerging blusher (Amanita rubescens) in an area of heathy pine woodland.

As you can see, most of the trees had shed their leaves but for younger silver birches which still held some colour.

I found most of my fungi on a massive fallen beech tree. Beech jellydisc was just fruiting.

It’s easily confused with jelly ear, which is usually found on elder rather than beech and grows much more floppy. Perhaps beech jellydisc is also more pale in colour.

I was pretty intrigued by this weird crust fungus, wrinkled crust. It was lovely and vibrant, with an interesting orange fruiting body appearing from its base.

December is a month when I really begin to notice slime moulds, maybe because the woods are growing bare.

Though not a fungus, this very small slime mould is a Lycogala, with the common name of wolf’s milk. You can pop it with your finger and liquid gushes out. It’s harmless and quite fun. That may also help the organism to reproduce.

The following day I went for a walk from my house and found these shaggy inkcaps trespassing on a deserted golf course. Golf, like other outdoor sports, has not been allowed during the UK’s recent lockdown. It was eerily quiet and I was the only person there.

I thought these mushrooms were charming, like a parent protecting its offspring all at sea in the grasslands.

Grasslands seem able to hold fungi later into the year than woodlands. I think that’s down to the leaf-fall in woodland, which may repress some species from being able to push through. Just an untested theory.

I’m confident this is a species of waxcap, perhaps snowy waxcap. Waxcaps are indicators of ancient grasslands and have suffered in Britain due to agricultural intensification. The chalk grassland of the South Downs is a great place for them, but churchyards and even some moorlands can be good, too.

One lunchtime I made a break for the woods, with much lower expectations than previously. I spotted this blusher pushing through in the cradle of a tree root. Only later did I notice that an ichneumon wasp had landed, in focus, on the cap of the mushroom. It was a complete accident. You can read more about ichneumon wasps in my Macro Monday blog.

A new find for me (and once again not a fungus) was this coral slime mould. It was spreading across a small piece of wood at the side of the path. Slime moulds are fascinating because they are something of a mystery to science. They are believed to show early evolutionary forms of memory and are not closely related to fungi. I still need to buy the ID book.