The Rother wends its way around the foot of St. Ann’s Hill, the site of a motte-and-bailey-castle probably built by the Normans in the 11th century. The water is high and brown after heavy rain that has fallen for several days. Atop the hill the ground is carpeted by the spiky cases of sweet chestnuts, freshly fallen from the huge trees that dominate the hill. The sun, shining on what feels a rare occasion, lights the open shells, their chestnut fruits glimmering where they lie.

Away from the hilltop I follow a path that whips back across the prow of the hill. Here dead oaks lie on either side of the path. Angel’s bonnet mushrooms grow in a cluster from crevices in the sinewy wood, their white caps used as a post by a dung fly. Under one mushroom cap I notice another fly’s head poking out as it rests on the stem. 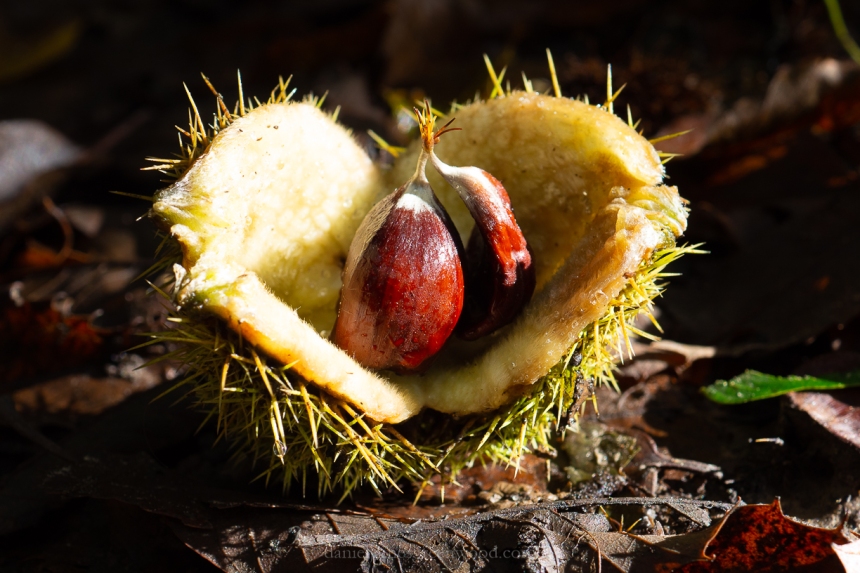 I hear the loud clopping of a dog coming towards me on the path. In my stillness it doesn’t know I’m here. As it comes closer and closer into view, its legs are in fact long and thin. It’s a roe deer, young and carefree. It sees me at a distance of ten feet and splashes through ivy, hazel and brambles down to the safety of the winding Rother.