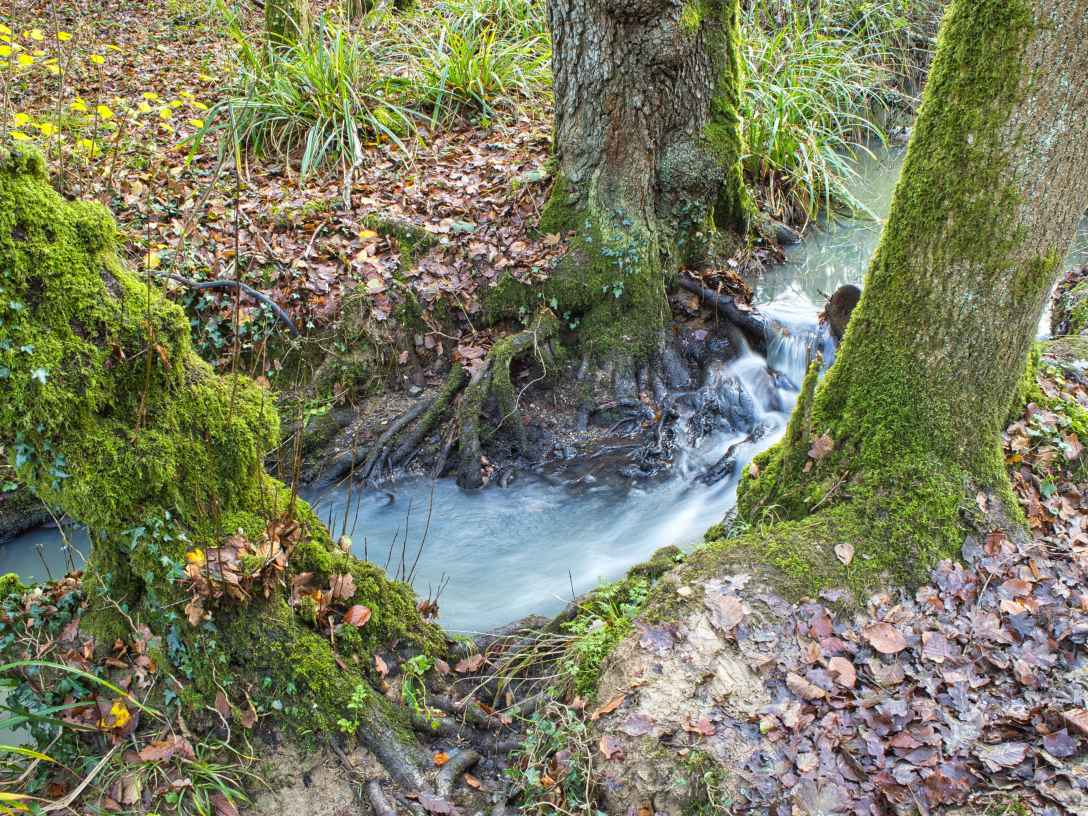 There is something special about woodlands in December. For wildlife, they can be a forbidding and barren place, which is why so many birds now move to warmer urban areas for food and shelter at this time of year. I’ve spent a good amount of time in woodland recently and the amount of fungi was a pleasant surprise. The gills in the Sussex Weald (a local name for a stream, plural) were gushing after lots of rain. They kept good company on their edges – mushrooms.

I spent a couple of hours following the edge of a network of Wealden gills. I found a number of smaller mushrooms along the edges of the gushing gills, like this very dapper looking mushroom with a wood sorrel bowtie. You may also notice a tiny springtail on the plant! The word gill is also used in Scotland and northern England, where it’s often spelled ‘ghyll’.

Something that really caught my eye was the work of this wrinkled crust fungus, which is its actual name.

Fungi’s main function (fungtion?) in a woodland is to break down organic matter into soil and other minerals and nutrients which can support other species. It was fascinating to see this fungus ingesting (perhaps) organic waste material in its path. In this case it was consuming a sycamore seed.

Nearby, another specimen of the fungus was getting to work on a sycamore leaf.

On a tree growing over the gill, this purply jellydisc looked like something out of a 1950s b-movie horror film. I think it’s the moss’s sporophytes that make it look so low-budget sci-fi.

I think you probably get what I mean.

I had my binoculars with me for this walk and they were very useful in, unsurprisingly, spotting things from a distance. Without them I would have missed a fallen birch tree that was covered in many species of fungi, as well as slime moulds and mosses. Above is a species of either trametes or stereum, two kinds of smaller polypore.

There was a helpful illustration of blushing bracket’s lifecycle, moving from a pale coloured fruiting body, to red and then something much darker. That’s a long blush.

Sulphur tuft is a very common species which seems able to tough it out through the colder months. I have seen so much of it recently.

Though it may look nice, it’s a toxic fungus, so don’t get any ideas.

2 thoughts on “#FungiFriday: streams and shrooms in Sussex”