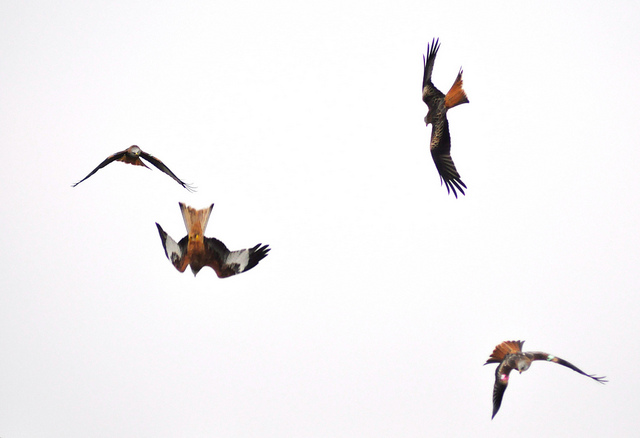 I am a countryside gawper. I like to watch the flow of valleys, hills and pasture seen from an English train window. As a student I remember travelling to and from Liverpool on the Euston line, experiencing a sense of nostalgia for the things whizzing by without the chance to grasp them. And this was before the trains had been improved to a mere two-hour journey between North and South. I recall the yellow of rapeseed and turnip flowers which bloomed in April fields, like a paintbrush passed across the glass. There were the peculiar farmhouses and barns, the horses drinking from streams which I deemed to be wild, and the black silhouettes of hawthorn and oak which had been moulded by the gusts and gales, all crooked and splayed. I remember the train slowing one evening in the gloaming, a brook taking on a glassy sheen in the near dark.

Now I stare out of the window in search of my post-London rations: skylarks, buzzards and such. These are not readily available in London, though they are in rural spots of Croydon and Bromley. This journey in particular was a trip to Birmingham for a flat-warming, promising (and delivering) a different kind of wildlife. The daytime train ride offered a snapshot of a new landscape to me, the Chilterns, designated an Area of Outstanding Natural Beauty and a part of the Green Belt. This is an area which has been earmarked for the High Speed Rail 2 which will see trains passing through the region every two minutes at speeds of 250-miles-an-hour. The service, some argue, will make use of the region but will offer it nothing in return. The closest stop will be Heathrow airport.

I was not thirty-minutes from leaving Marylebone when I glimpsed a trio of buzzards wafting in the grey ceiling. I saw jackdaws bothering the chimneys of small-town folk, and those magical inhabitants of plough tracks, the birds which had treated the silence between rounds at the disastrous battle of the Somme – skylarks. Their stiff, sharp wings rang the bell, as the train careered past on the raised track. The larks, three of them, descended upon a hedgerow in perfect accord.

I had recently read a book by Mark Cocker entitled Crow Country, where the author describes waking at 3am to watch rooks in Norfolk, amongst other revelatory birding experiences. The sections on Corvus corone, the carrion crow, had stayed with me. I could not help but observe these clever brutes patrolling green spaces in London. It should be pointed out that this is to the chagrin of some bird lovers who cite the cradle-snatching antics of the corvids as a reason to cull them, and to enhance supposedly falling fledge-rates of songbirds. Cocker’s writing on crows drew me to take greater notice of how they behaved. One thing I had witnessed a number of times in the autumn was crows bothered by kestrels, the big black creature barking, immensely uncomfortable in the presence of the cheeky falcon. Falcons like kestrels and hobbies sometimes go for old crow’s nests, so perhaps this was a question of ownership.

From my seat on the train I witnessed a trail of crows flying from over the roof of the carriage. The sound was killed by the glass but the conga-line of corvids pointed to something else. The line came to an abrupt end and a stretch of thin air opened up. And, some moments later, the giant wingspan of a red kite appeared in their wake. Its flight was smooth, a single beat of its wings expressing its power over the fleeing crows. The kite’s wingtips were like fingers. The forked tail was the motif that defined it, the whitish head and large white patches against the dark wings. This is not to mention the rufous shade which separates it from its continental cousin, the black kite. This is a bird which preys on crows, hence the sense of uniform panic amongst the fleeing black feathers.

Red kites were on the brink in the UK until a breeding programme in Cumbria re-established populations which have now spread eastwards into England. It is now said to be approaching students eating their lunch at Reading University, where a research programme is underway to discover how far the birds are spreading, with reports of the birds feeding in gardens. This is a monster which ate offal from the streets of London in the 1500s, when butchers threw them their scraps, but declined after centuries of persecution. For all of our dwindling species, there are some which are returning to dominate again. They’re screening in a train window near you.