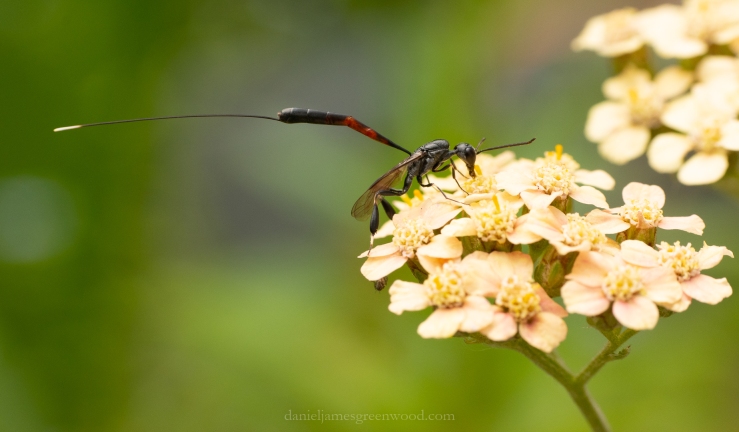 Welcome to the weekly wasp.

A couple of years ago my friend recommended a book called The Snoring Bird by Bernd Heinrich. The book is a memoir about Heinrich’s relationship with his father, Gerd, an entomologist who collected ichneumon wasps but who was never fully accepted by the scientific or academic community. Bernd tells the story of his father’s escape from the Red Army in 1945 and how he buries his collection of ichenumonids so they aren’t destroyed. Gerd travelled around the world collecting specimens. 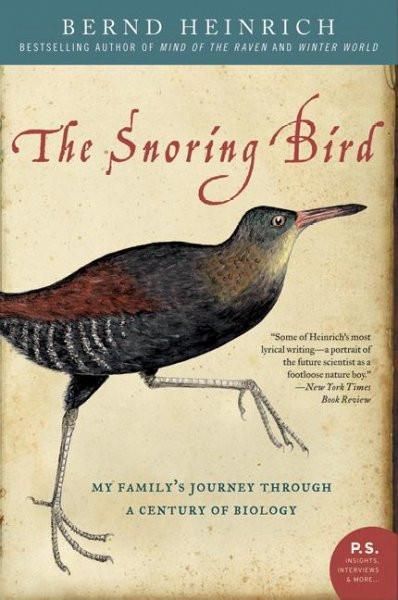 In Britain we have poorer biodiversity than even our closest continental neighbours because of physical separation from the European landmass, intensifying land management practices, the impact of successive ice ages and, furthermore, the fact our climate is not tropical. But even then, we still have over 2000 species, which you can’t say for other fauna like birds or butterflies.

Reading The Snoring Bird consolidated a personal fascination with wasps, one which has not really travelled beyond blogposts, photos and seeking them out where I can. I’m not a collector of anything other than images.

Ichneumons have what we perceive as an unpleasant ecology. Females use their needle-like ovipositor to ‘inject’ their eggs into the burrows of insects, into crevices in wood or, most appallingly to our species, caterpillars or the larvae of bees. The eggs hatch inside the live caterpillar and eat it. It’s probably where the inspiration for the Alien films came from. To balance things out, insects inspired the creation of Pokemon. 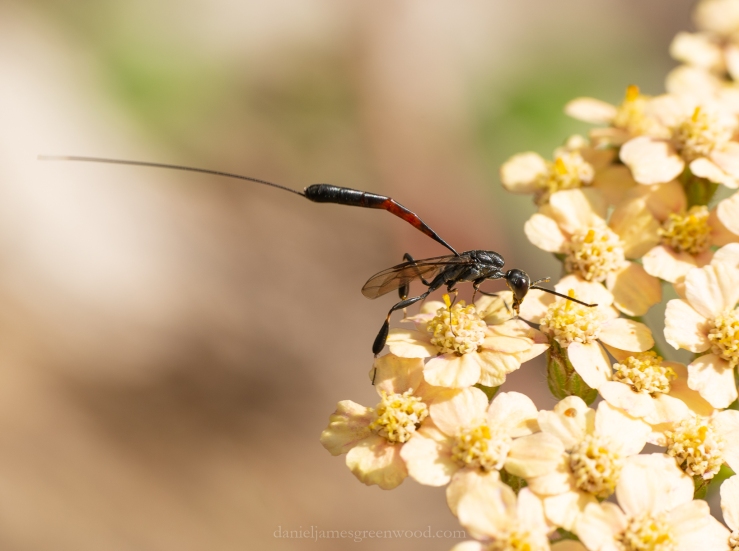 Last week I was sitting in my garden catching up with visiting family. I looked to my right at a pot of ornamental yarrow flowers (Achillea). I had noticed a bit of activity and glanced over to see a slender insect flying around the flowers. It was the equivalent of a video buffering over a poor quality internet connection. When it landed on one of the flowers I recognised it instantly as an ichneumon wasp. I ran inside to get my camera and managed to get some good photos: in focus, well lit and sharp enough. 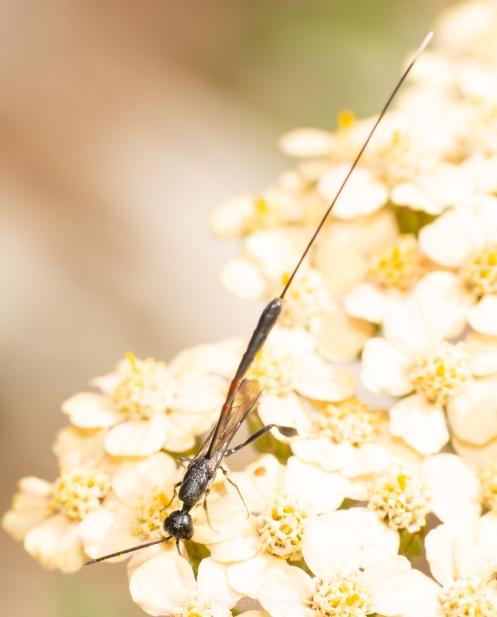 I have always wanted to see this species. Its scientific name is Gasteruption jaculator. To find it in my garden was a real surprise and one of the highlights of my time seeking wildlife.

Why might it have visited? We actively garden for wildlife, insects particularly, and there is a log store that this kind of species will seek out. A couple of months ago I saw a similar species hovering around the logs, but I couldn’t get my camera quick enough and it moved on. 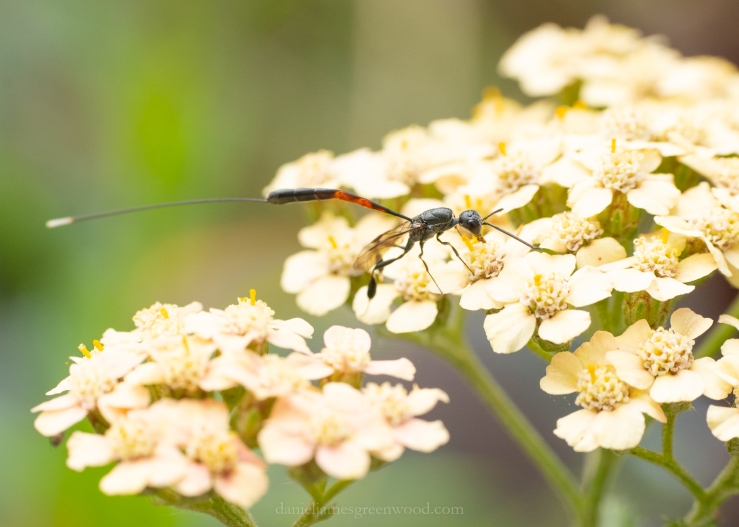 There are people whose first reaction to seeing this insect may be to kill it because of its ecology. That, to me, says everything about our misunderstanding of nature. A natural history lesson will tell us that without solitary wasps such as these we would have no social bees, a community of insects which prop up our dependencies on pollination of both crops and other flowering plants (including trees). Social bees evolved from solitaries wasps. The ichneumon’s ecological relationship with bees is one millions of years old, one small part of a web of life that has given human societies licence to develop through an abundance of food. 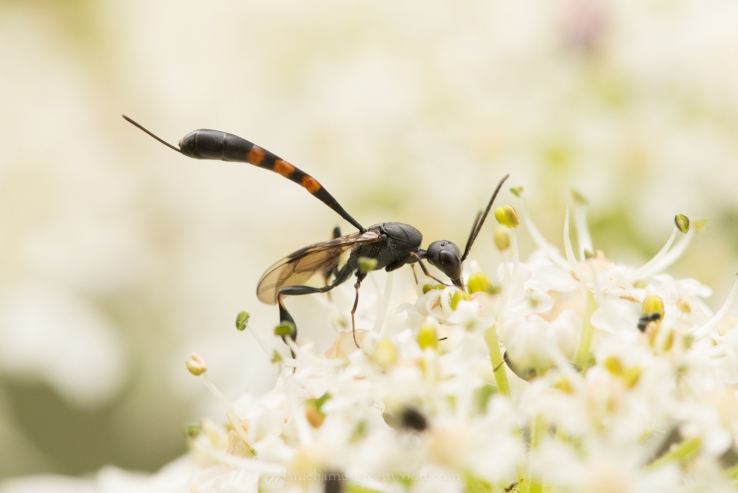 However, this is an insect which has affected the way some of the science’s key thinkers have framed their own mortality. Darwin doubted that any benevolent God could have created animals which behaved in this way. Not sure about you, but I often think that about Donald Trump or Boris Johnson.

A few years ago I encountered a cousin of the ichneumon that visited me in my garden. It has a far shorter ovipositor and its scientific name is Gasteruption assectator. I was walking on the North Downs when I found the insect nectaring on hogweed flowers. A woman passed me and asked what I had found. I said I’d found the insect that made Darwin doubt God. She looked away with a knowing smile:

‘I remember reading about them,’ she said. 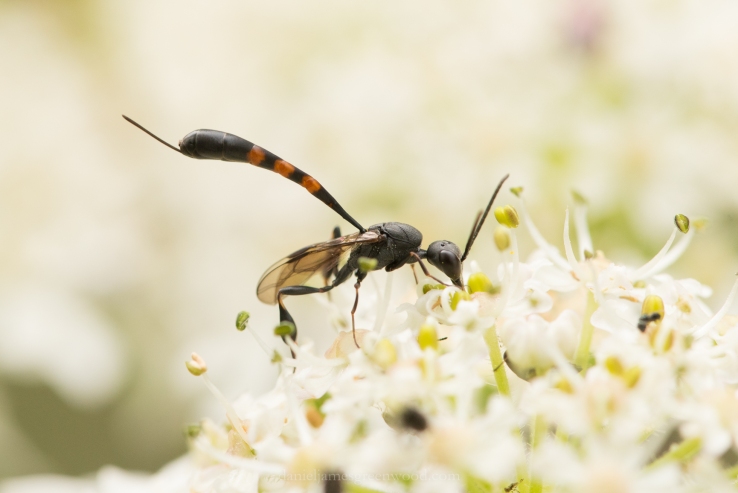 The last day of June but still flowers are yet to bloom. The meadow’s time has not been missed. On Farthing Downs the gate’s latch clicks and ringlet butterflies jig between grasses. Lady’s and hedge bedstraw cover patches in a lemon meringue mattress form, a reminder of the microcosms of grasslands:  dampness, the presence of certain rock or regular disturbance – it all leads to diversify the plants that appear now, and where others want to be. Skylarks still have songs to sing, as do yellowhammers, a song thrush down in the woody field edge. Crows half-heartedly mob a sparrowhawk with prey clasped between its talons.

On the lower slopes hundreds of meadow browns, ringlets and skippers cross the path sheltered by trees and the adjacent slope. It is that sense of abundance that so many lament losing. These chalk grasslands, managed with the long-view in mind, are the exception here on the edge of London. For centuries the North Downs have felt like an escape route from the city. Don’t forget that for thousands of years people have tramped the Pilgrims’ Way to the sacred site of Canterbury. To me they feel like a doorway to something better, somewhere free of the city’s ills. Somewhere you can breathe, where a wild, pastoral world still reigns. In truth it is just a thought and the reality remains different. 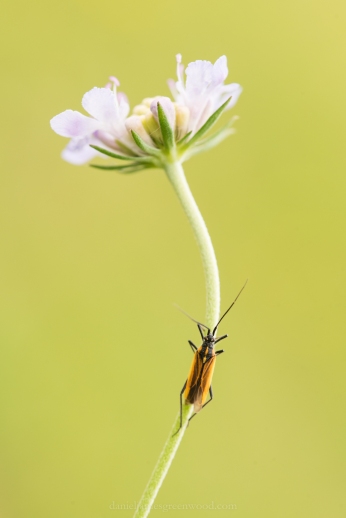 The only way is up! 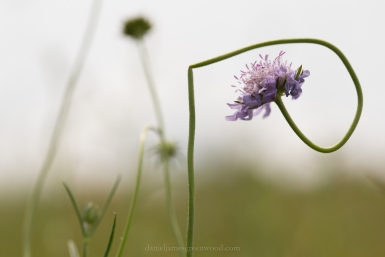 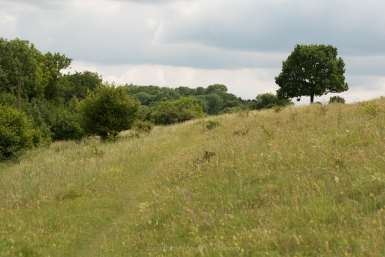 It’s quiet but I meet people walking dogs. A woman admires spikes of rosebay willowherb, remarking in a strong Indian inflection: ‘beautiful wildflowers’, snapping them with her camera phone. Another lady with a hint of Yorkshire in her voice says how delighted she is to watch marbled white butterflies. Whilst examining hogweed flowers a woman from the north of the border asks what I’m looking for. There’s a parasitic wasp with full ovipositor raised over its back like a scorpion ready to sting – of course it does nothing of the sort.

‘I’m looking at the thing that made Darwin think there was no God!’ I say.

Her eyes widen, she looks away, and she knows exactly the thing I mean.

‘I remember reading about them,‘ she says.

Ichneumon wasps insert their needle-like ovipositor into their prey, laying an egg which pupates into a grub that eats the prey from within.

Sitting to scribble this on a desire line between pyramidal orchids, vetches, marjoram and clover, a scorpion fly rests momentarily and horseflies make their attacks. They perch on my bag with turquoise compound eyes and trowel-like mouth parts. I flail my arms like a chimpanzee, mindful that a dog walker may soon approach and offer emergency first aid. These downs hold great riches, some of which only want your blood.