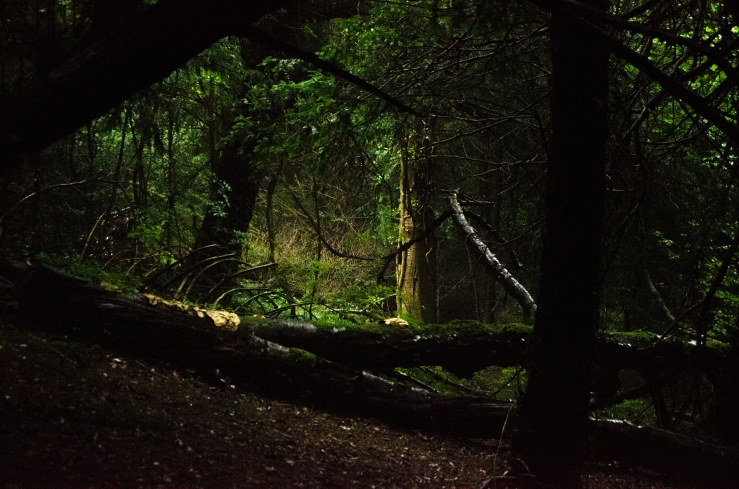 Standing on the track leading into Devilsden Wood I look to the ground for dryness, somewhere that hasn’t been soaked by this perpetual rainfall. I see fallen ivy leaves that appear like cuts of leather when really they are crisp under foot. Dog shit, too, the new waybread for the modern ancient footway. I hate the stuff. My waterproof sheds its load onto my jeans and it’s wait and become cold or move and receive woodland raindrops, some chucked from the canopy of mature yew, ash and beech, some fifty feet up. When they get behind glasses, these droplets shock the senses.

It’s fungi season, the signpost of falling temperatures, not too cold but a shift from the sultry summer. I gawp at log piles with an explosion of mushroom caps, marked by striping and shapes that would define them to those who understood them. But still, I spy an oysterling appearing from a rotting trunk and feel that in two years of woodland obsession I have at least learned something about this magical animal that appears so fleetingly it could almost be through the fabric of time, a monitor on how we’re doing. Checking the sole of my boot again, we’re crap. I wipe it off in a mud puddle. The rain has not lessened. I head back out from the dark, autumn-beckoning woodland and onto the wet warfare of the Downs. The change in mind is clear, the atmosphere of a woodland changes you. It is not like the open land, so much a canvas for human experimentation, our impact on woodlands is never so clear as the plough’s to the open landscape. A woodland to all but a minority could have been in that state for millenia, before human time. The wood is a wild city, with nature’s social housing, swimming pools and fast food. It was our home once, too. There is the semblance of a summer out here, yellow rattle not yet rattling, knapweed funked-out in pinkish purple, even a bit of scabious. These wildflowers have something of January’s left over Christmas decorations about them. A car passes along the lane. Woodpigeons are striking through the rainy sky, turning their wings and bodies at an angle – to avoid the direction of the rain? – always as individuals. These birds cut several different figures in a year – hurried, panicked on the wing, or else male birds cutting arcs out of the sky as they display to females long into the summer recesses. Now they could be migrating, they could be hunted. Mostly they are gorging on elderberries outside my bedroom window.

On the Downs a flock of goldfinch are startled into the sky like pieces of a broken vase put back, its smash rewound and fixed. They sit in a small hawthorn bush and I look more closely. On the end of a branch, clear and possibly not so fearful of man is a juvenile, all grey on the head, interested in looking but unaware of the perils of being watched. My advances fracture them once more and I’m left with a snapshot of their escape into the landscape captured on my camera.

I spent a weekend with the European Conservation Action Network (EuCAN) at the Dorset Wildlife Trust’s Kingcombe centre. The birds seen here were caught in mist nets and ringed by Neil, who measured their wingspan, checked for disease, and sent them away back into the wild.

Goldfinches having their wing feathers checked

Blue tit having its ankle ringed