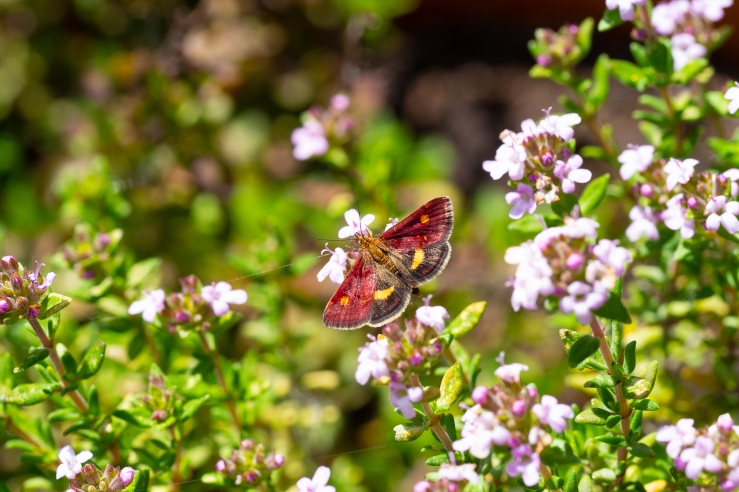 Stay alert, for insects that is. We’ve seen some hot weather in the past week and it’s brought the insect life back out after a cool previous week. With the physical distancing measures still in place, it’s not possible to do any meaningful macro work away from home. I have been on my official walk from home with a macro lens but it’s not the time. Despite this, the one thing I am reminded of again and again is, with macro I get my best results in my garden. It’s a small patch in a network of open gardens in an urban location, but it gives me the chance to focus on small areas. 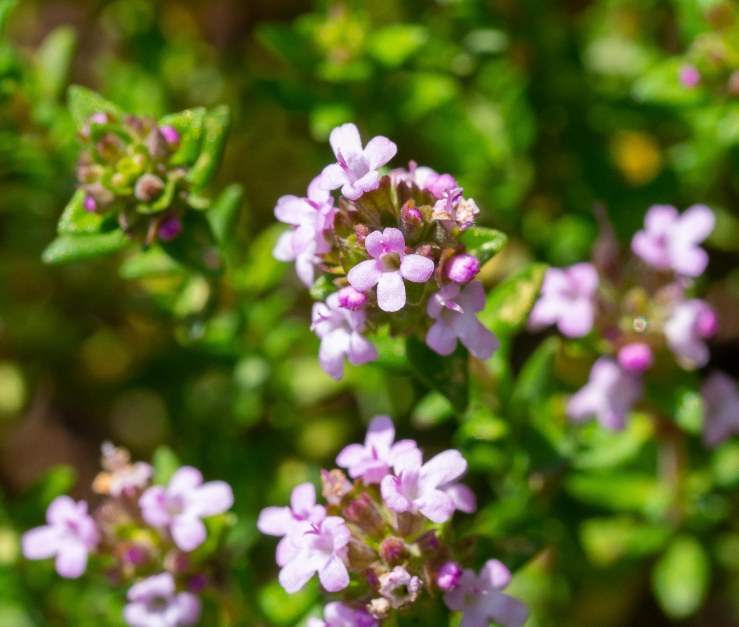 The winner of this week’s challenge is thyme. If you want to support pollinators, plant this. Scatter seeds amongst brickwork and it can also come through. It’s also a wonderful herb for cooking and other purposes. 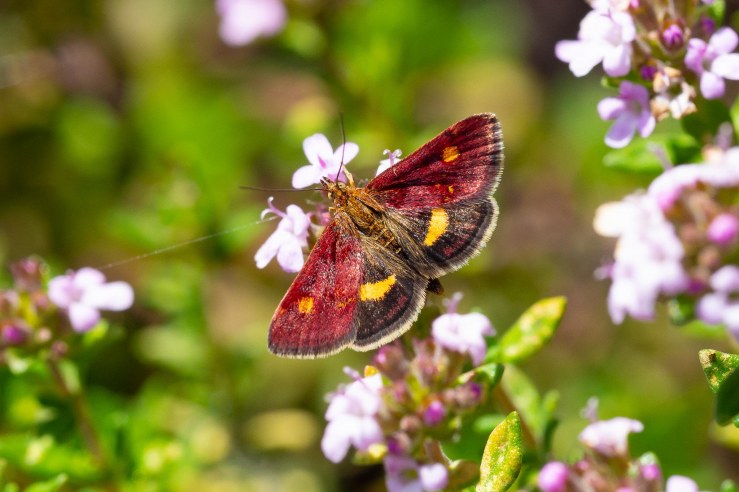 This week it provided forage for a mint moth, a species I snapped a couple of weeks ago on my car. This is a beautiful and quite common day-flying moth. I can only imagine what other moth species might be visiting this under dark. 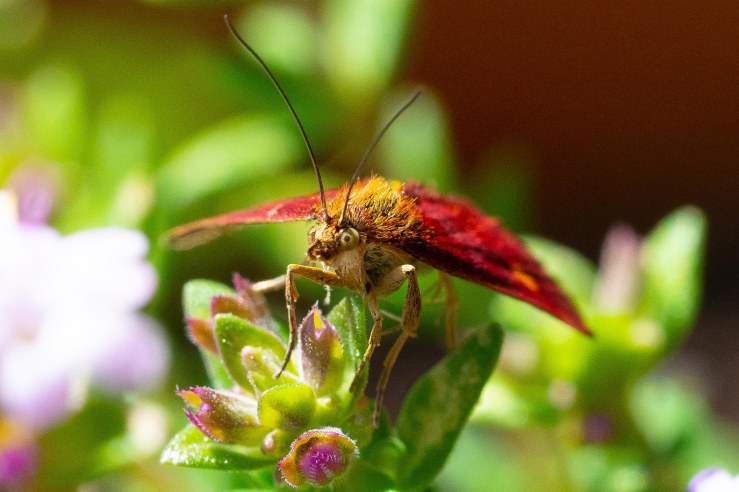 They are real charmers and should also help to educate most people in England who have been misinformed that all moths eat your clothes. They don’t, and they need you to give them plenty of thyme. 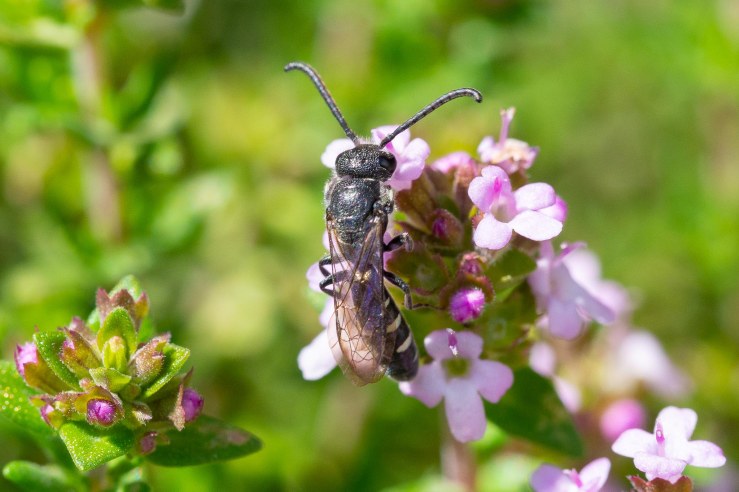 The thyme also attracted a new species for me (not necessarily a big deal) in the form of a five-spotted club-horned wasp. I was unsure whether this was a bee or a wasp. I thought it looked fairly close to the Lasioglossum bees due to its long, thing shape and long antennae. On Twitter I got an answer from Lukas Large that it was in fact a wasp. They’re cleptoparasites of mason bees, which we have plenty of in our bee hotel and other parts of the garden. 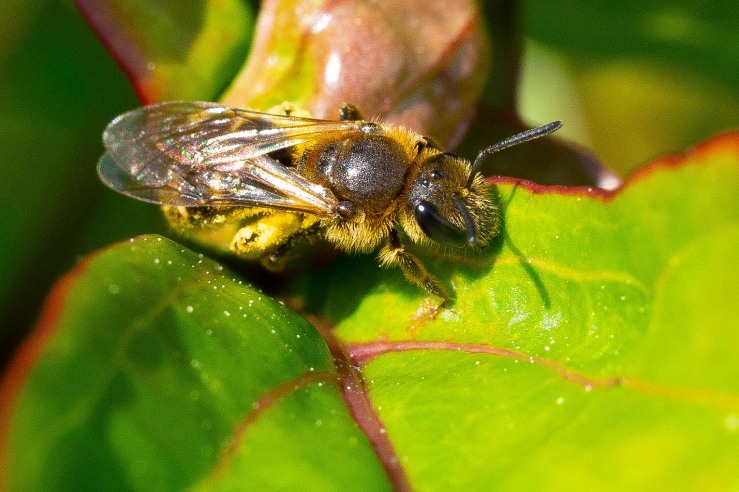 On that same sunny lunchbreak I found what I think is probably a yellow-legged mining bee. Here you can see its pollen cache scattering onto the surface of the leaf. 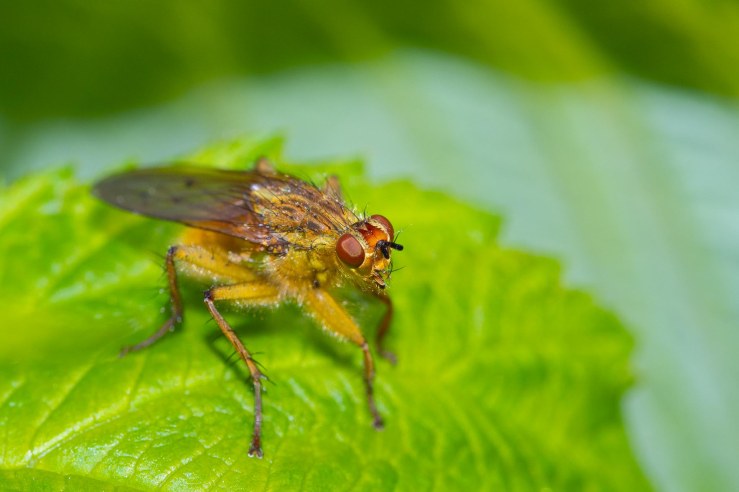 A sign that the countryside is tantalisingly close is this dungfly. There are over 60 species of dungfly in the UK so one shan’t trouble one’s self with an ID. I’ve only ever seen these as visitors to gardens or in grasslands grazed by cattle. They are quite hilarious on cow pats. Had to be there. 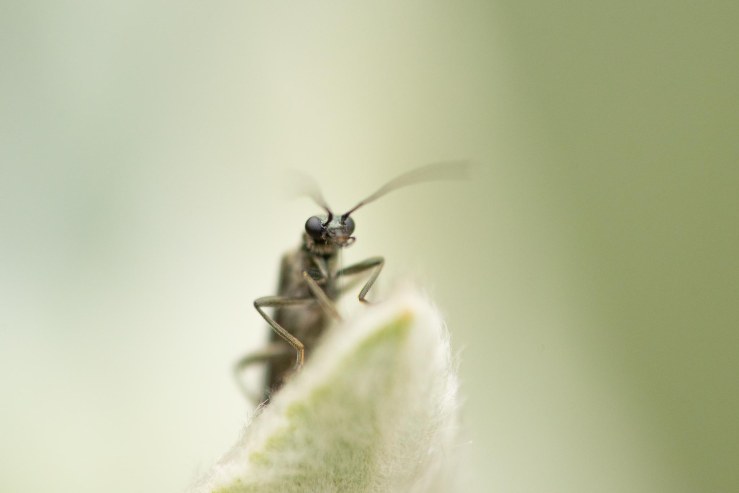 On a greyer afternoon I took a compulsory visit to the lamb’s ear patch and, as ever, there was something hanging out in its fluffy world of leaves. This is an oil beetle. 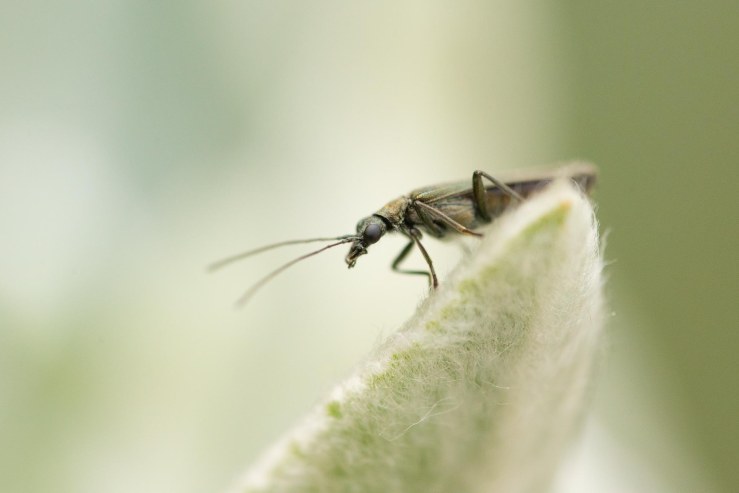 Many thanks must go to this beetle for being so chilled in front of the camera. He/she has the potential to go far as a macro model. 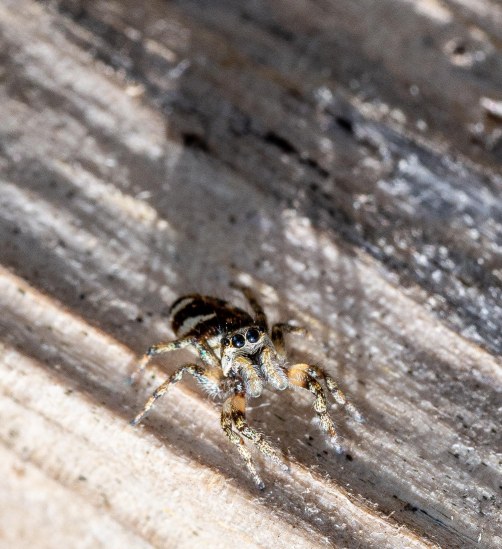 Condragulations are due to another species this week. Zebra jumping spiders are regular visitors to just about every wooden surface in my garden. I find getting their eyes in focus really very difficult, as I’ve said before. With this beautiful spider I only noticed later that the sun cast a long shadow, making it look far greater than it is. It’s like the old proverb ‘fear makes the wolf bigger than he is‘. Really this spider is so harmless and cute it could help people who have an irrational fear of them. Maybe not. 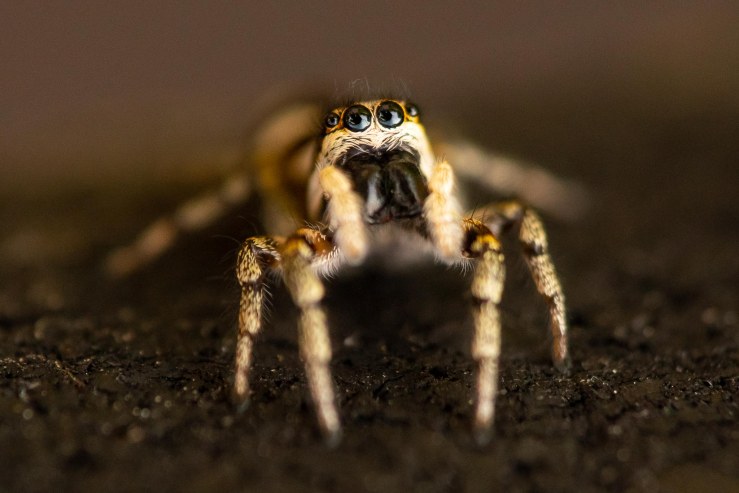 The moral of how much ‘better’ my photos seem to be at home played out again. I had just been on my ration of walking and not really managed to get any photos I was happy with. Then I came home and this zebra jumping spider walked over and looked right up at me. Bear in mind this spider is about as big as a couple of grains of rice. The look it gives are either an eye-rolling, here we go again, or a, just take the photo and leave me alone.

Whatever it was thinking, I was happy. 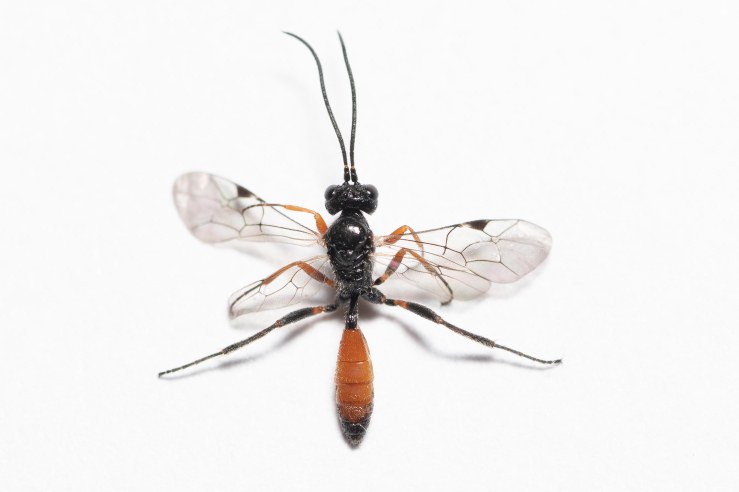 It’s true that I started last week’s post with a parasitic wasp in my living room. That phrase is enough to make most of the UK faint. This week it happened again. But rest assured, there are other species to enjoy this week. 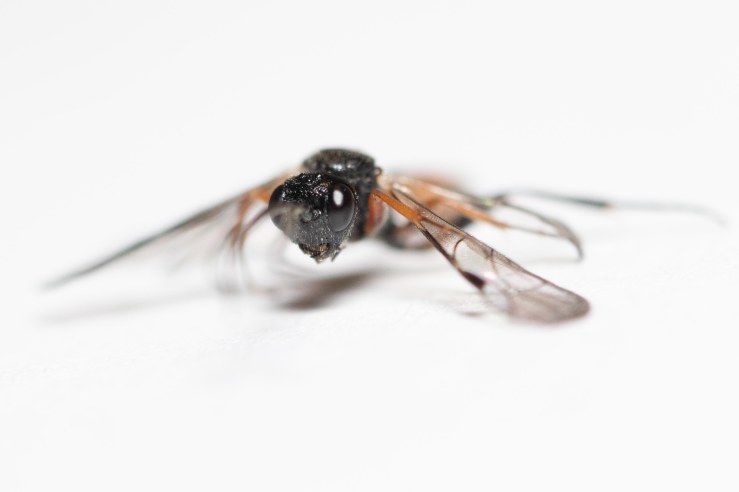 When I see an insect trapped indoors, I am the sort of person who needs to try and let them all out before being able to sleep at night. I accept that is probably a compulsive behaviour reflecting an anxiety disorder. In this instance I didn’t get the chance. I went to drink from my camomile tea, dear reader, and there was a small insect floating in the water. 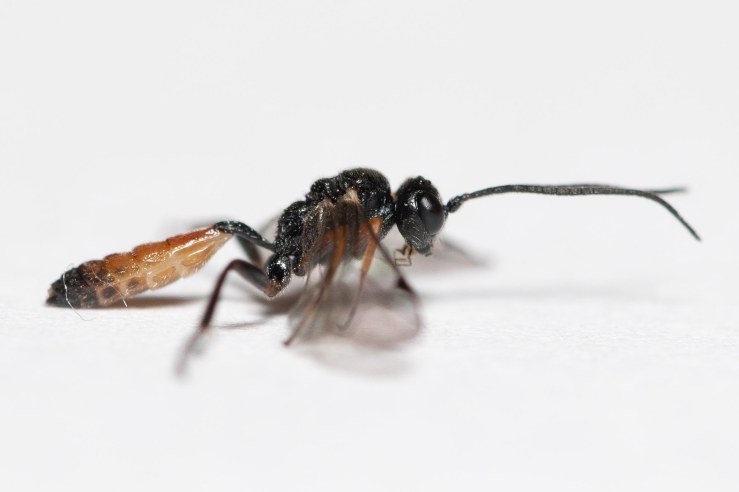 I plucked the insect out of my tea and it lay perfectly splayed on my fingertip. It was a tiny ichneumon wasp, a group of insects which I went into more detail about last week. As it dried out its beautiful form began to appear. I found a piece of paper and placed it on the white surface. My cameras are now living in the living room so they were close by and I took a few snaps. It was a beautiful specimen. I am not intending to try and identify it because I will probably get told off by the local Hymenopterist via iRecord. 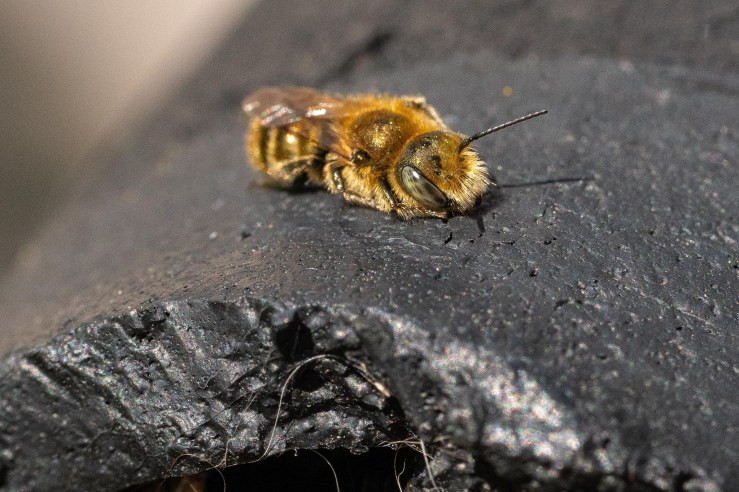 My time in the garden in the past week has largely been spent chasing this small bee around. It’s probably a male blue mason bee with the Latin name of Osmia caerulescens. Another book is telling me (not literally) that it’s Osmia leaiana. They have large green-blue eyes and zip around for a while before settling down on a hot surface like a cat in a sun patch. 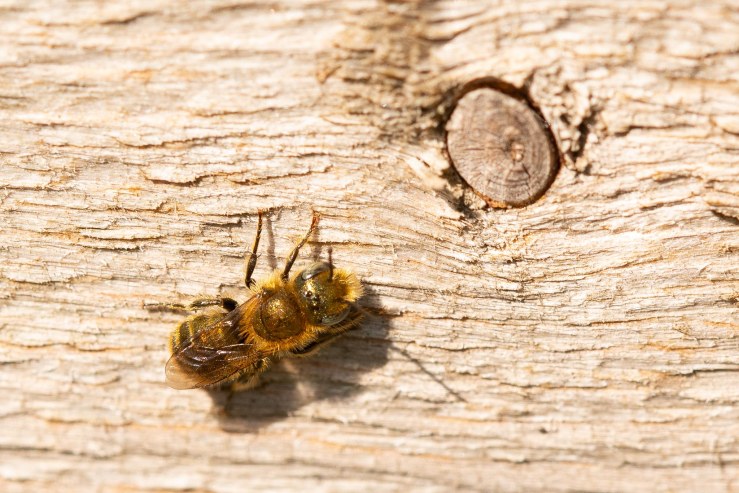 To say this tiny solitary bee gave me the run around is probably understatement of the lockdown era next to ‘drinking disinfectant will not help you’. 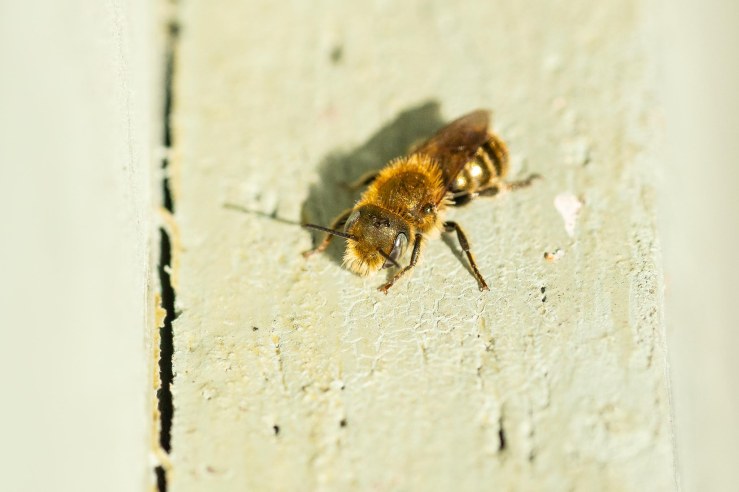 The bee liked to rest just long enough on a surface for me to get there. I had to approach it with exactly the right camera settings and focus on my lens to be able to get a decent photo. The satisfaction of getting a decent image was massive. Little wins and all that. 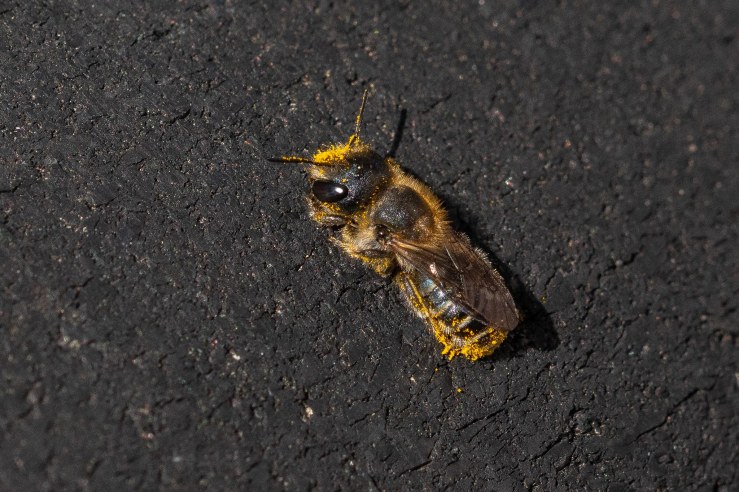 I think this is a female blue mason bee having a bit of a rest on the roof of the logstore. Safe to say the highlights of the past six weeks in many ways have been getting an in-focus photograph of an insect like this. 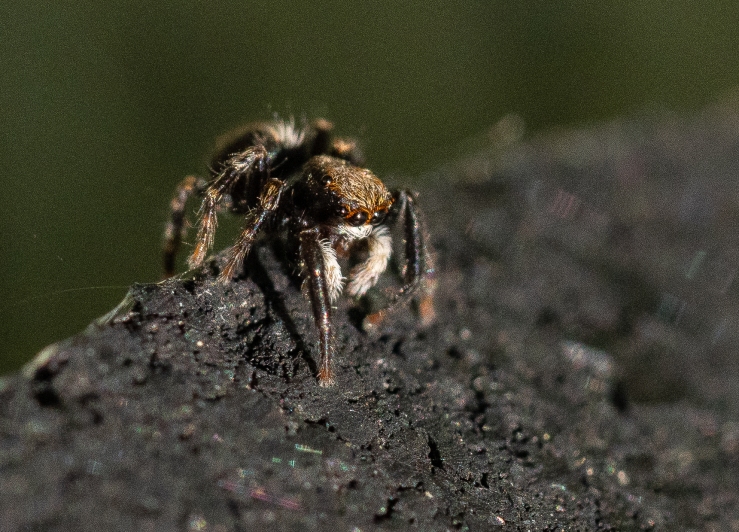 The internet is awash with stunning photos of jumping spiders. They are cute and fluffy with massive cartoon eyes. This was the best attempt I made at getting something in focus. I don’t believe in taking them out of the wild for a photography shoot – the ichneumon wasp doesn’t count! – so I am trying to get them in focus in the wilds of my woodstore shelf roof. If there is any type of spider that will help people get over a fear of spiders, it should be this one. 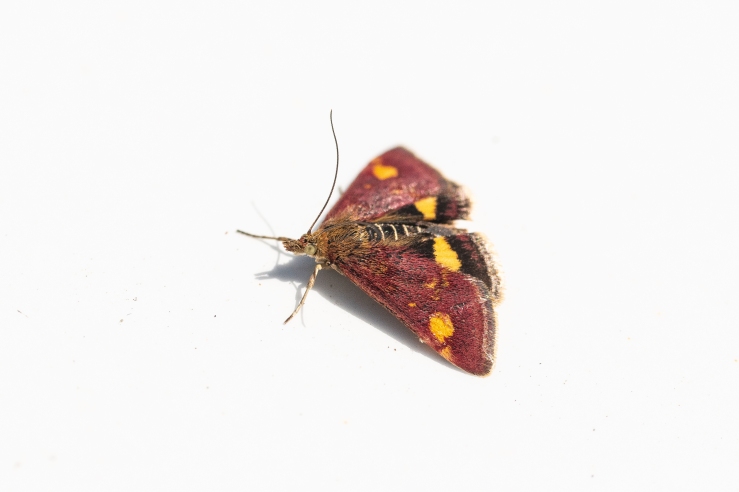 My car hasn’t moved very much in the past 6 weeks but it’s proving useful for insects basking in the afternoon sun. This mint moth was doing just that on the bonnet.

The biggest surprise in the garden this week was spotted early one morning before I started work. On the side of a hexagonal flower pot I noticed some unusual wing shapes. I realised it was an insect and nipped inside to get my camera. It was in the shade and temperatures were only just rising. It was a mayfly, one of 51 species in the UK. I know very little about this group of insects other than that they appear en-masse over rivers and that they only live for one day. How did it get to my garden? The River Arun is ten minutes walk away but it was a real joy to think it had used my garden to shelter for half its short life.