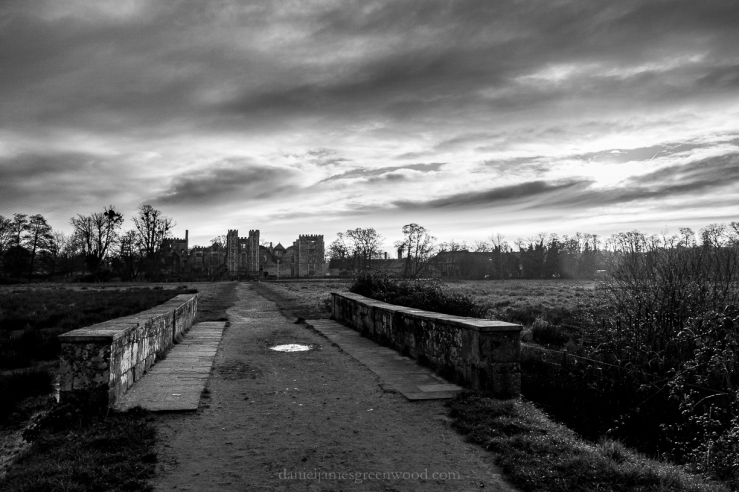 The cloud bares blue sky wounds above the Cowdray Ruins, as mist rises from the Rother. The sun breaks from the cover and melts the frosty rushes, droplets glimmer in brambles. Bull rushes thaw like over-frozen choc ices emerging from the bottom of the freezer.

A song thrush sings from the woods nearby and it has little competition. Except for a couple shouting at their dog as it flashes through the low rushes. Imagine if a song thursh was actually just saying ‘kids, go to school’, ‘where’s my breakfast’, ‘what’s the time-what’s the time-what’s the time’. Its beauty would shrivel away and it would become an annoyance. The mystery gives it life.

The dog runs free through the rushes, its paws sloshing as it seeks the scent at the end of its nose. Its owners’ cries grow louder, angry, fear creeping in. With it a small bird, a wader, bursts from the rushes and arrows out towards the town. It has a white breast and a long, thin bill, curving as it reaches the tip. Its wings are sharp like a modern fighter jet. I’m sure it’s a snipe.

The bird will have been roosting over night in the rushes and now will seek more wet grasslands, probably where the Rother snakes behind Midhurst and where there are less people. Not that there are really so many here. On spring evenings they perform an otherworldly song flight, something that I first heard over reedbeds in Poland a few years ago.

They sing in a bizarre, electronic kind of way, but also like someone skilled at blowing through a large blade of grass. That evening I watched it soar and swoop over the reeds and river. Birds hold such potential for us, the promise of their weird songs, in these dark winter months, offers hope.