Last week I dropped in on a favourite Sussex Wildlife Trust woodland. It’s a place I only ever visit when travelling to or from work. It’s a place with a funny name, The Mens. It’s even funnier when I tell others I’m going to The Mens after work. The name is said to derive from the word ‘common’, a place where local people would have had foraging and grazing rights in centuries past. It’s now a significant ancient woodland in the Sussex Low Weald, holding National Nature Reserve status. It’s special because of its naturally occuring beech and holly, though I’m no expert on its specifics. It is a uniquely beautiful woodland. It is highly sensitive, and when I go I do my best to treat it with a high level of respect and care.

It’s one of the few places in SE/central southern England outside of the New Forest, that I have visited, where moss and algae cover tree trunks. Above is the typical assemblage of mature beech, oak and a surrounding sea of holly.

You can see indicators of how many mushrooms are likely to be in fruit when you first enter a reserve. I saw the above within the first few paces. It’s is a mushroom called spindleshank Gymnopilus fusipes (to my knowledge, happy to be corrected), which grows around the buttresses of oak trees. In a separate recent walk, it was the most common fungus I saw, and so is enjoying a key fruiting period.

In terms of tree health, I wouldn’t say it was a ‘good’ sign because there is some decay going on and it is defined as a parasitic species. In a woodland like this, it is normal and part of the life of the woodland. It helps to disconnect ourselves from our normal notions of life and death when in woodlands, it doesn’t play out in the same way there. Dead and decaying trees are crucial to a woodland’s life and longevity.

Spindleshank is often first seen like the group below, bursting on the scene. It is probably attached to a root or piece of wood under the soil.

This was the only fruiting mushroom I found during the short walk but there was a large abundance of slime moulds growing on fallen wood and some standing trees.

These orangey-pink blobs are a slime mould known as wolf’s milk Lycogala epidendrum. It’s famous because you can pop it and it emits a gunk of the same colour. It’s quite cool.

You will find it on decaying wood that has been in situ for several years, often in shady and damp conditions.

This species looks a bit like slug eggs. As with most slime mould I find, I’m not sure of the species.

We have had a very wet time of it in southern England, which should be cause for celebration, really. This same species was making the most of the conditions.

My camera is capable of doing in-camera focus stacking. This means it can take several images at different focus depths and merge them together to make an image with everything in focus. This is a dream come true for macro photography, especially when the subject is so tiny.

This is a species of coral slime mould. I have seen so much of this in the past few days spent walking in oak woodlands in West Sussex. It’s clearly striking while the woodland is wet.

And so is this little slug.

Macro 📷: the smallest wasps on Earth

This blog often complains about the poor understanding in England regarding wasps. I began drafting this post in the midst of what’s known as ‘the silly season’, when Britain’s tabloid newspapers turn their guns on gulls, wasps and spiders, with a seasonal vacuum in news. However, in a global pandemic there is no real vacuum… END_OF_DOCUMENT_TOKEN_TO_BE_REPLACED

The Sussex Weald: spiders in the mist

I first noticed the mist as I walked down the road where the landscape slopes gently towards the river. The hill in the distance was softened by a white veil of mist. Turning off into the first field, the sight was astounding. The sun flooding through the grassland, illuminating the dewdrops in the desiccated seedheads… END_OF_DOCUMENT_TOKEN_TO_BE_REPLACED

Following on from part one of my recent trip to Dartmoor National Park in south-west England, it’s now time for part two. You can read part one here. This was another day chock-full with mushrooms. It began well with a nice indicator of mushroom season when we found a gathering of clouded funnel on a… END_OF_DOCUMENT_TOKEN_TO_BE_REPLACED

It’s a great relief to be able to share some fungi from the Wood Wide Web this week. There has been steady rainfall in recent weeks which gave the sense that some summer shrooms might be ready to appear. At this time of year I’m looking for the early indicators of autumn’s fungal moment, which appear in the form of brittlegills or Russulas, in scientific language.

The fungi described this week are garnered from two walks in the woods of the Sussex Weald in West Sussex. The first walk was a short evening wander to a mixed woodland with signs of ancient woodland flowers like bluebell, but with lots of birch, hazel and some oak. It then pretty abruptly turned to pine, which happens quite often in the Weald because of the arrival of sandier soils where the Weald clay ends, and the prevalence of forestry.

It was much more dry than I had hoped but mushrooms are tenacious things. This nicely illustrated a new fungal phrase I learned in Robin Wall Kimmerer’s book Braiding Sweet Grass (p.112 in the ebook). You can listen to an interesting podcast with the author about mosses.Tthe Native American language of the Anishinaabe describes “the force which causes mushrooms to push up from the earth overnight” as ‘Puhpowee’. And so was this very small brittlegill pushing through the leaf litter.

I have never really tried to identify brittlegills to species level because they are so numerous and similar. I would guess this species is the charcoal burner. But I could be wrong about that.

This is one of the red brittlegills from August 2018 in the Weald, something to expect in August through to September. 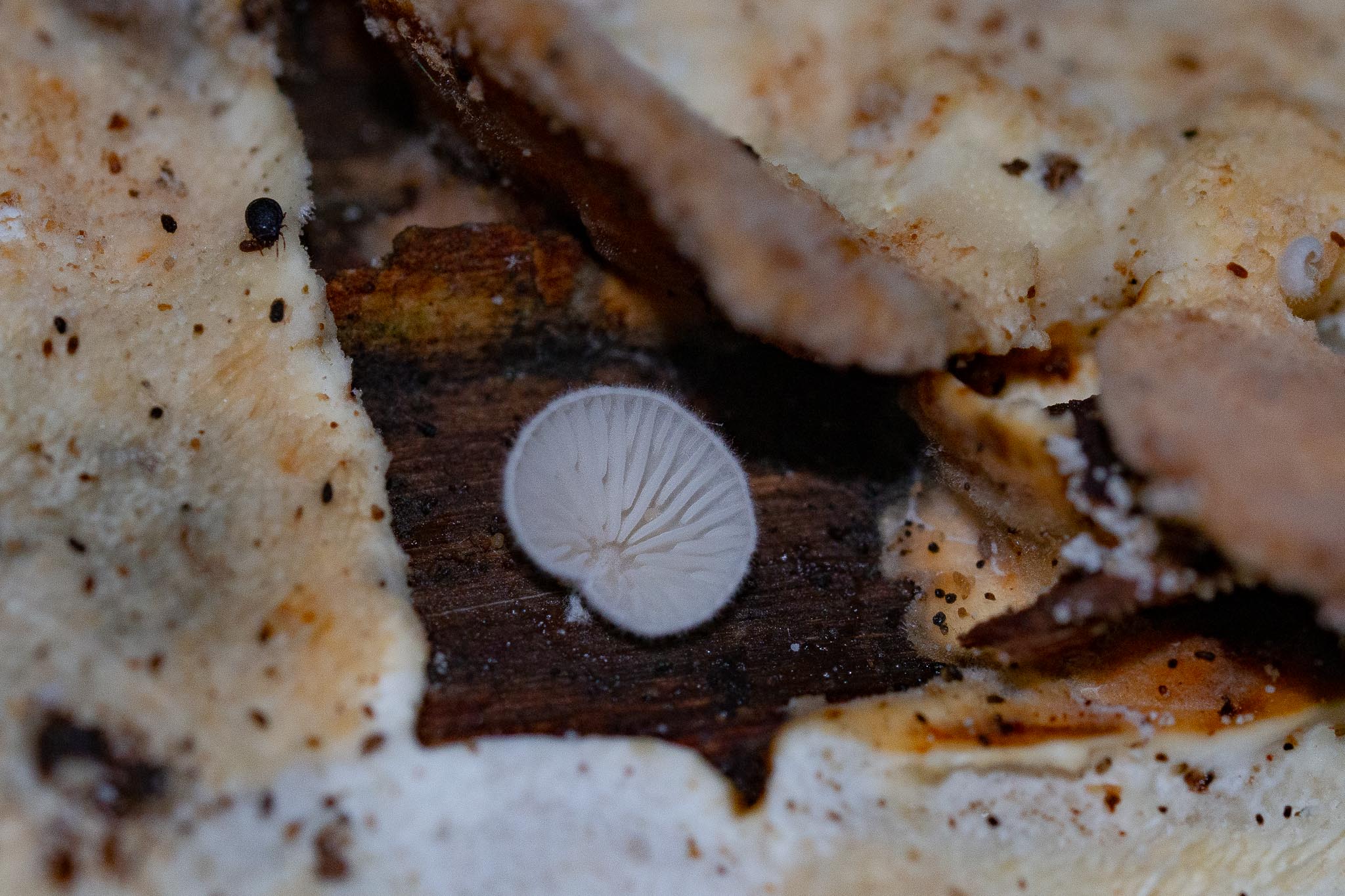 It’s a very dim view due to the light but my companion found this fungus within a fungus. It’s a species of oysterling. You can see a black springtail (or maybe even a tick?) on the left hand side for scale. 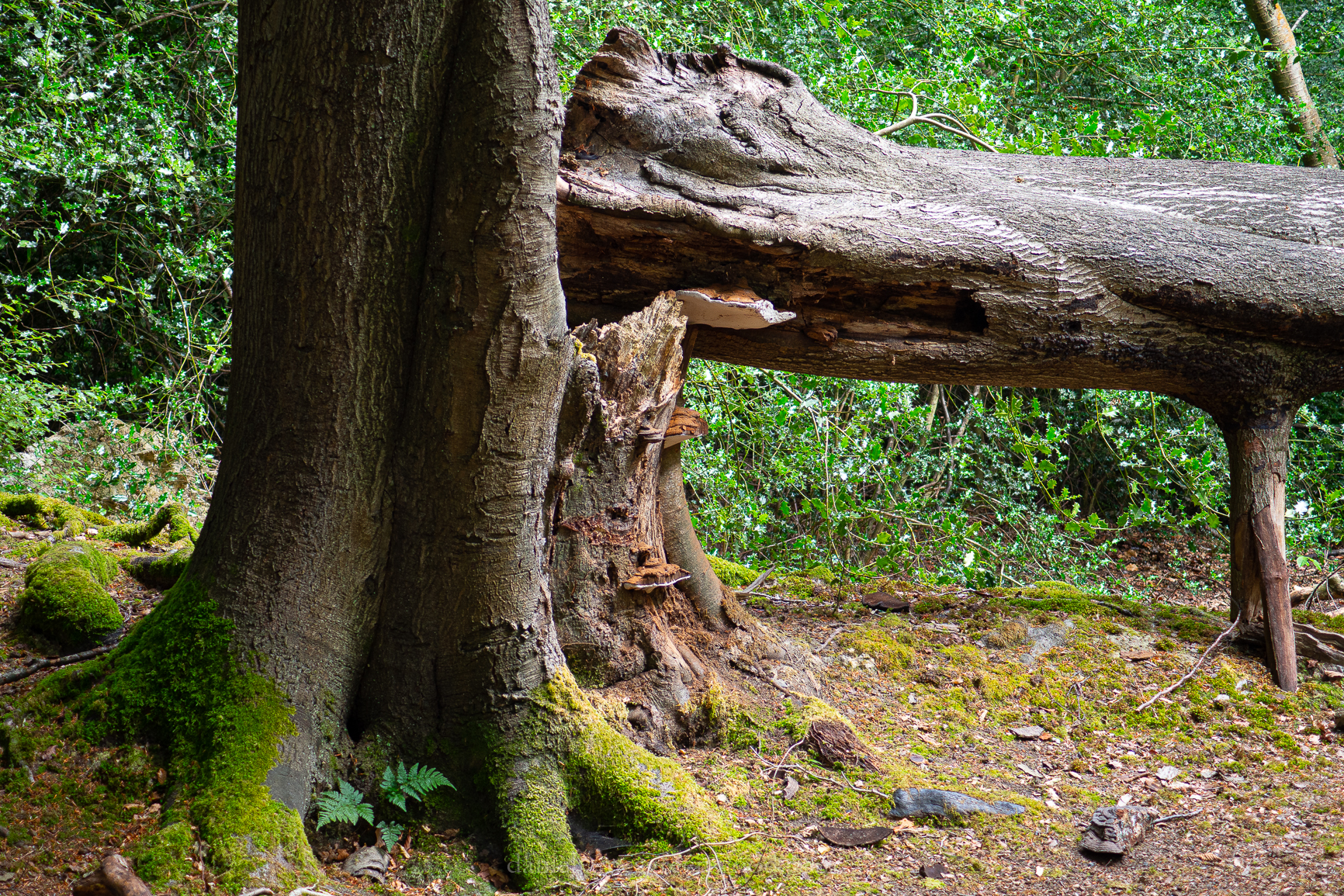 The second walk was in the afternoon at another Wealden woodland I am getting to know quite well. I recorded an Instagram story guided walk of this experience which you can see here. If you have the Gram. 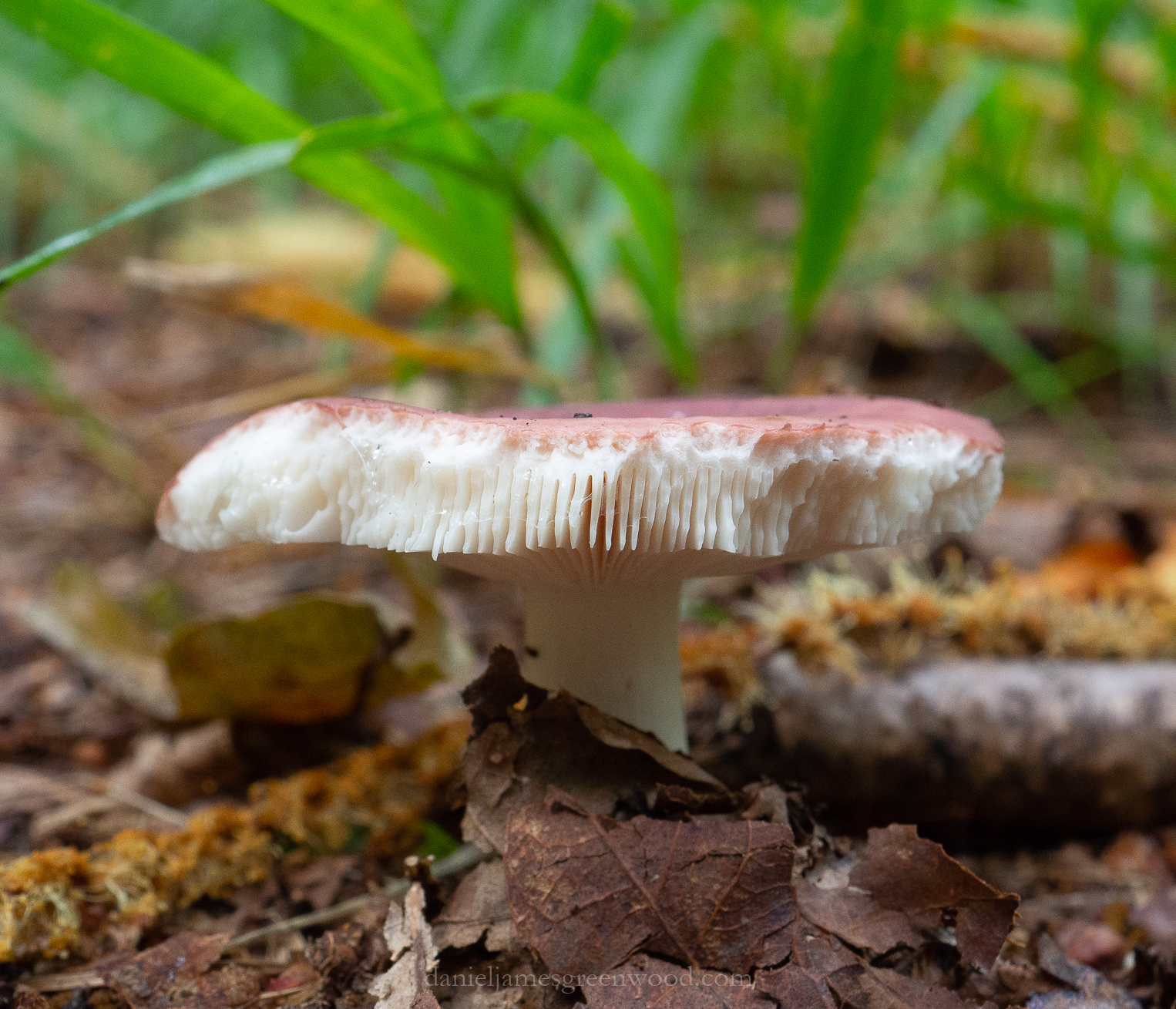 Again it was well-nibbled brittlegills that could be found. This is probably the work of a small mammal with some input from a slug. I’ve seen grey squirrels pick these mushrooms, and spin them around by the stem and nibble down the gills. That interested me because grey squirrels are an American species. Brittlegills are also found in North America, so perhaps they are just returning to their roots. Does belittle the idea that grey squirrels don’t belong in European landscapes, the evidently do. Yes, I know about red squirrels. 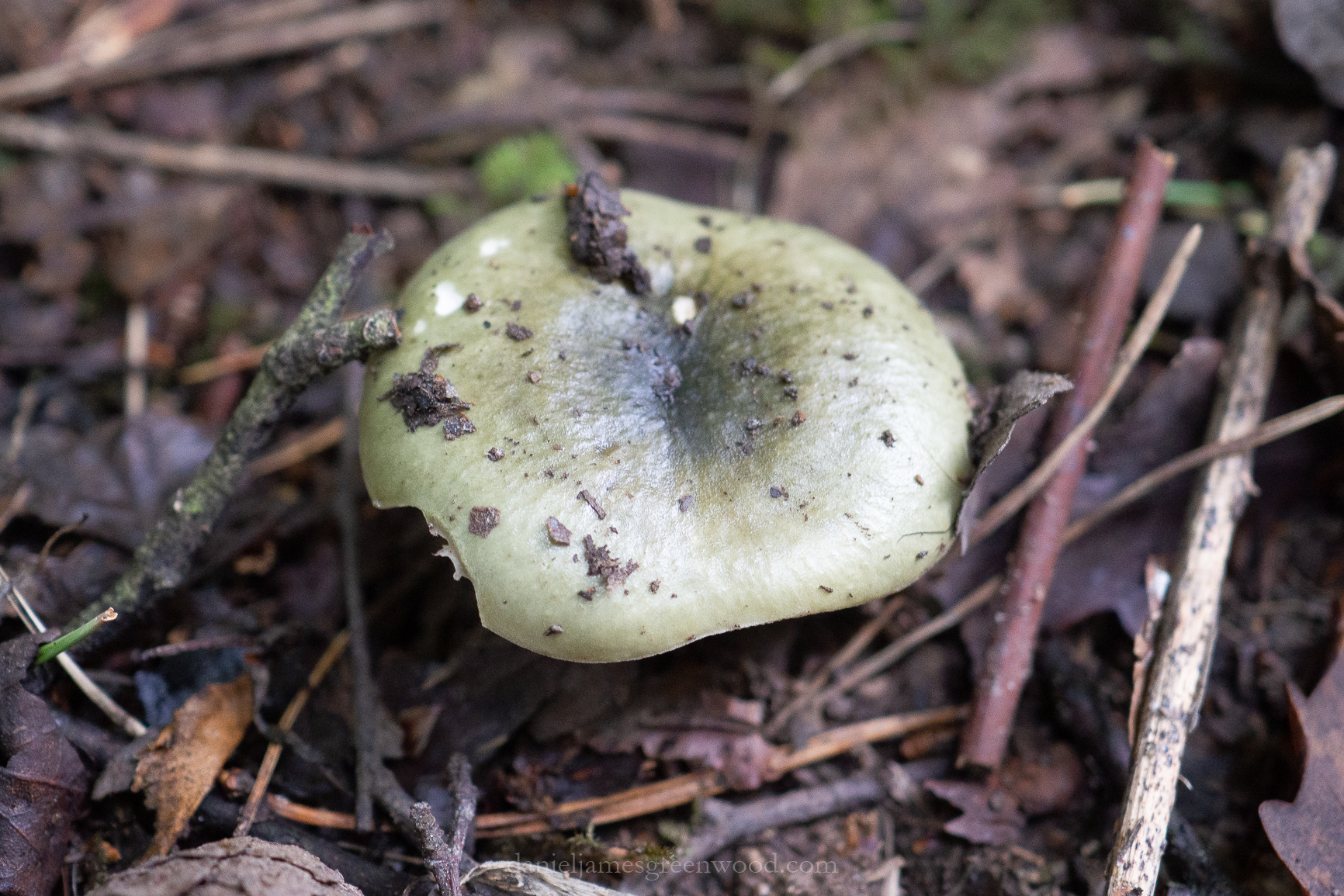 I’m sure these species are not in any way appetising for the reader. This is probably one of the green brittlegills. It looks a bit ghoulish but I was pleased to find it. All these finds were just at the edge of footpaths. 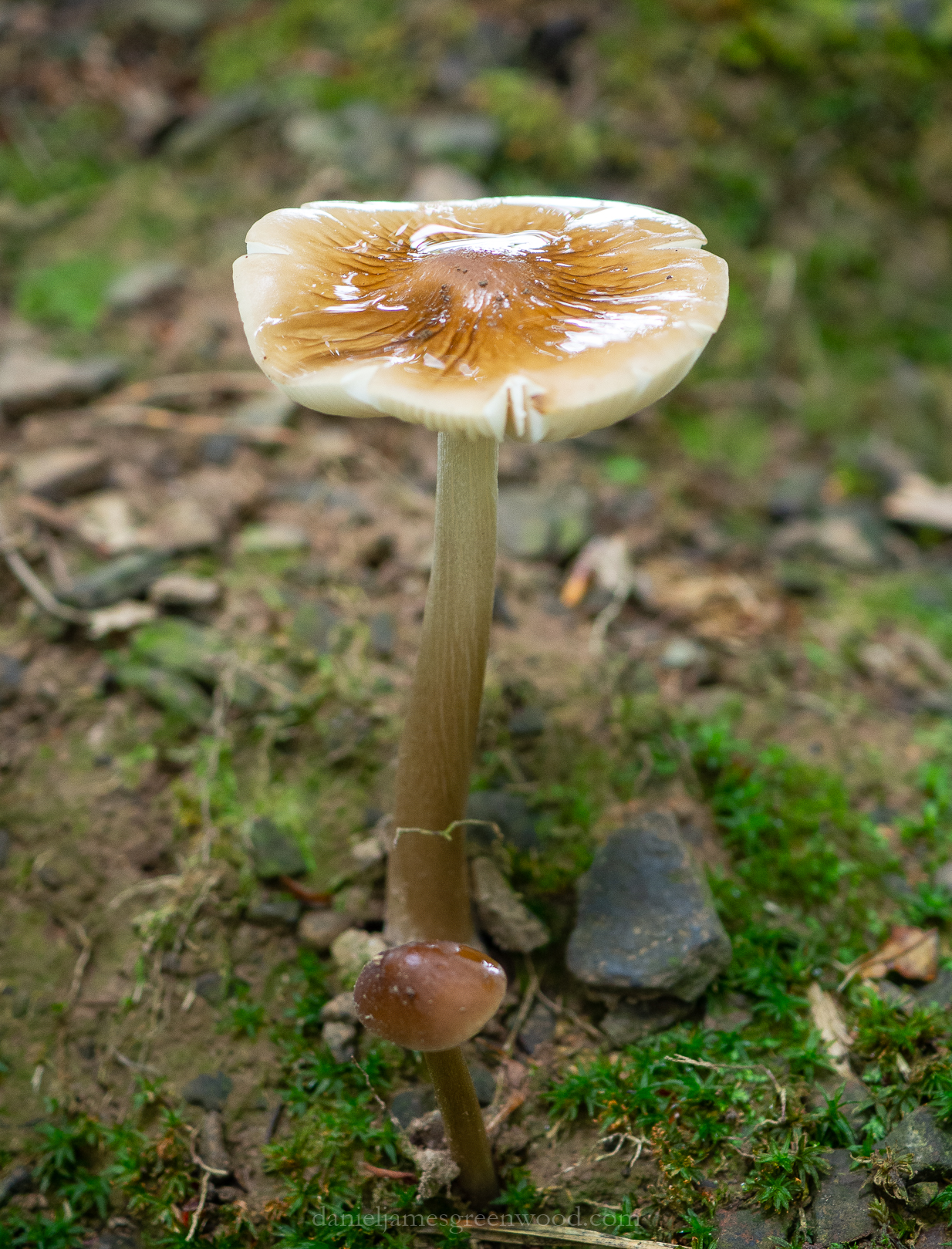 A common summer mushroom is rooting shank, one of the toughshanks. ‘Shank’ has a pretty dark meaning in modern language, particularly in London, but it’s an old name for leg. That’s where the names of red or greenshank come from in the bird world. Americans call similar species ‘yellowlegs’. I prefer the olde Englishe names. 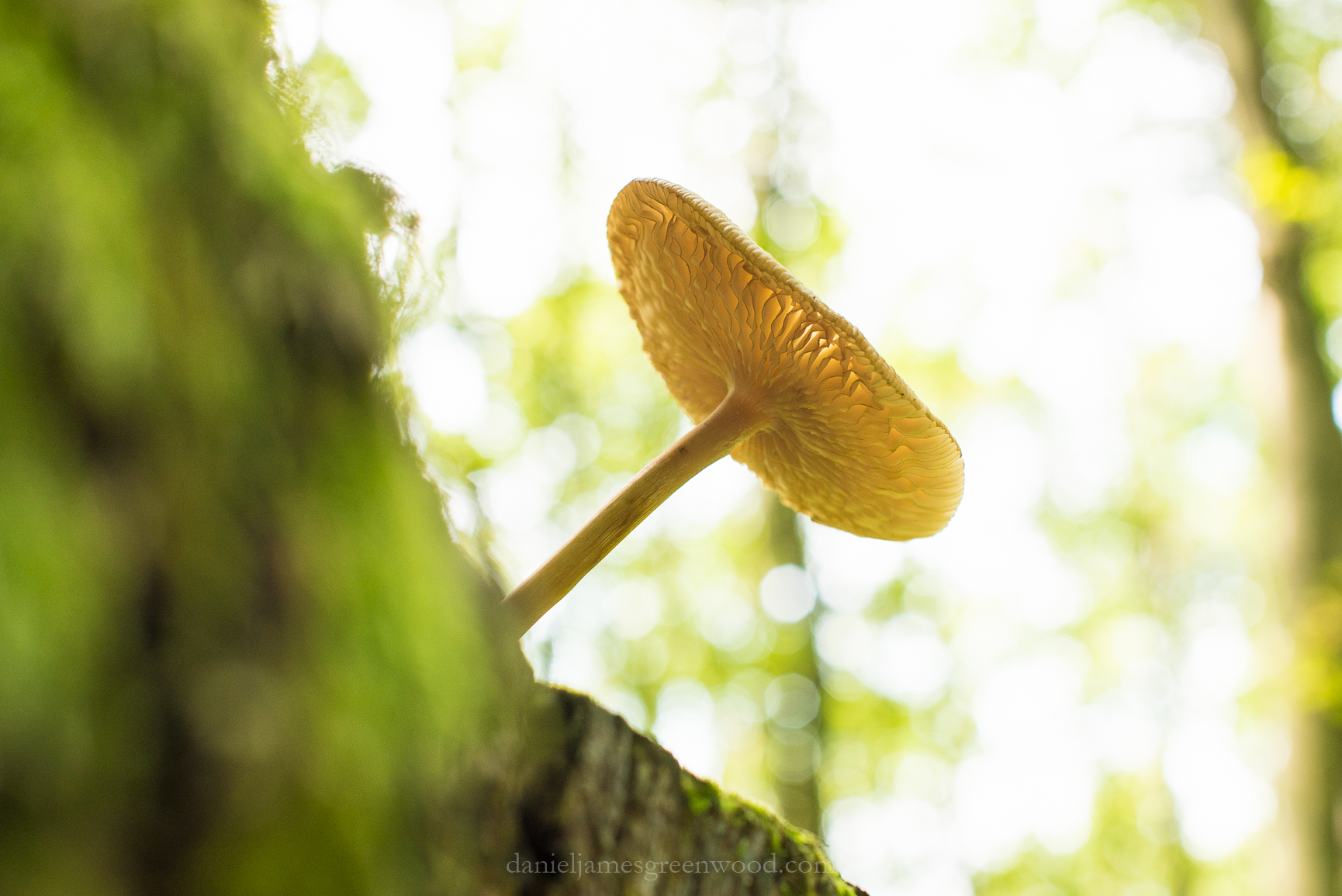 Rooting shank is quite an abrupt shroom, it just shows up where it likes. You can find it from now through to September from the woodland floor to stumps and buttresses of trees. This dream of a shroom was in the White Carpathian mountains in the borders of Czechia/Slovakia but I first saw it in urban south-east London. 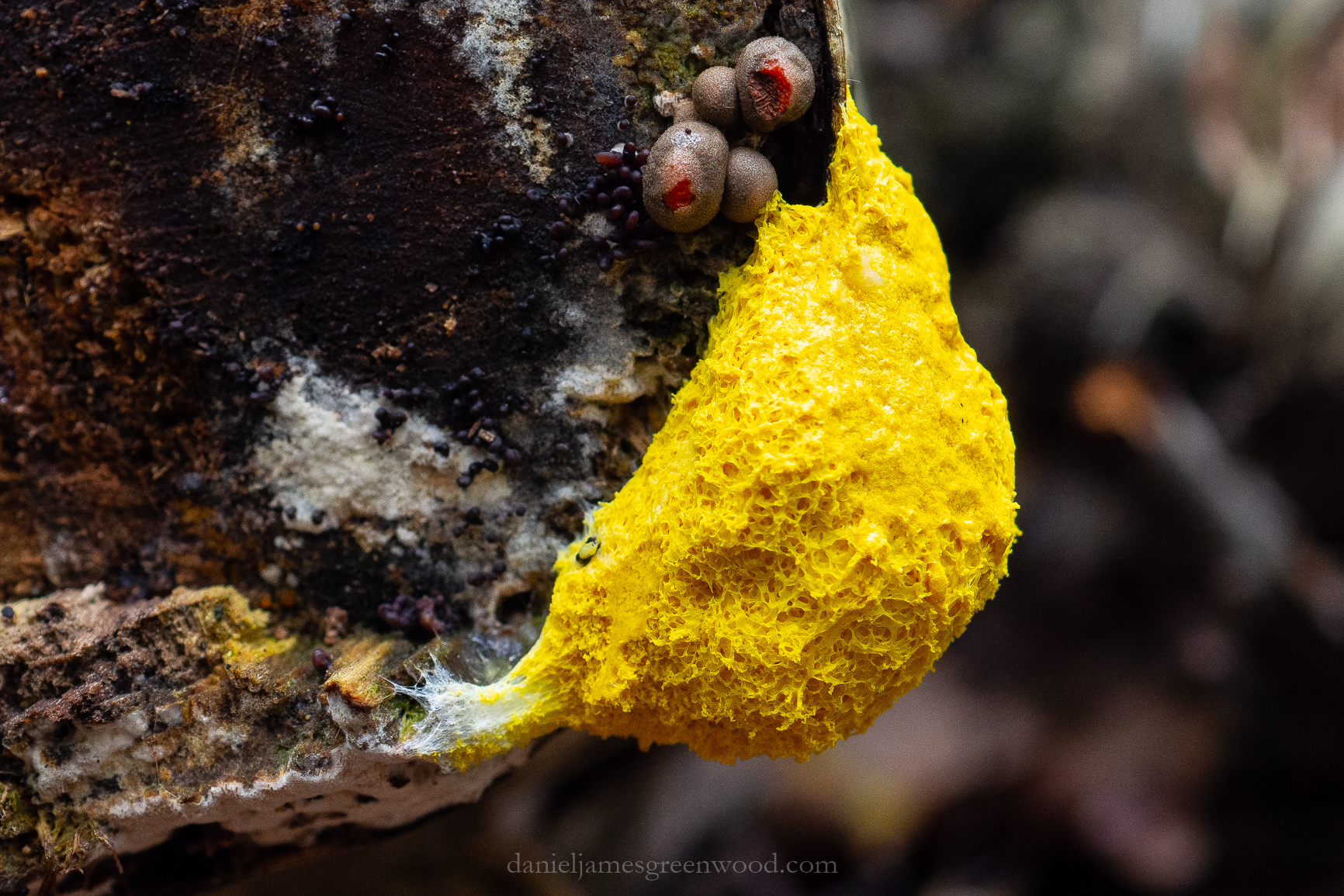 It’s not a fungus, but this dog vomit slime mould was a lovely find (believe it or not). This amazing video gives a much better explanation of what this slime mould is up to:

I have recently learned that slime moulds have memory!

It was only after taking this photo of the slime mould’s birch log that I realised how much was happening. You can see the early stages of small polypore fungi moving in from the outer edge as the wood degrades. I think the greyish blobs next to the slime mould may be Lycogola species, sometimes known as wolf’s milk. Lyco means wolf. The puffballs, Lycoperdon mean ‘wolf’s fart’. Oh dear. And we don’t even have wolves in the UK anymore, just in Downing Street, LOL!