With another week of social distancing and time spent indoors, I am once again recalling a classic mushroom experience. Sorry to disappoint both of my readers, but this does not involve the ingestion of hallucingenic fungi. If I said that on Instagram I would lose probably all my followers. Don’t tar me with the liberty cap brush!

This week I am recalling one of the great days out I’ve had in search of mushrooms to photograph, hot on the heels of last week’s look back at 2019’s highlight. This time I invite you to the New Forest, virtually, and the moment I snapped what I think is the most perfect mushroom scene I have witnessed.

It was October 2017 and I’d travelled from London by train to Brockenhurst to do a long circular walk from the station, taking in some beautiful ancient woodland, plantation and bits of heath. The New Forest is a National Park in Hampshire, southern England. It is home some of the most intact stretches of semi-natural woodland in Europe. Semi-natural woodland equals mushrooms.

On arrival the signs were good because the dead wood held smaller shrooms in nice condition, such as this probable bonnet. That’s a mushroom name I wish existed. 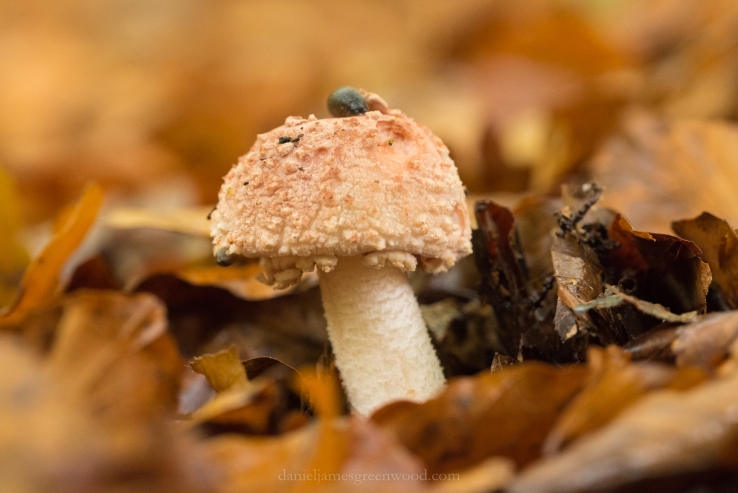 The richer areas of woodland were under beech. You can see that the leaves had already fallen, what can be a bit of a pain for photographing shrooms because they’re all hidden, basically.

This mushroom seems to dissolve into the background glow of the newly fallen beech leaves.

Looking for fungi, it’s difficult to ignore the mushroom of the insect world otherwise known as a dor beetle.

One of the pains of photographing fungi is how much time you have to spend down in the dirt. Upon leaving the first area of woodland on this circular walk, a gang of bonnet mushrooms were poking their heads out from a fence post at head height. This is the kind of thing you see in peak mushroom season. 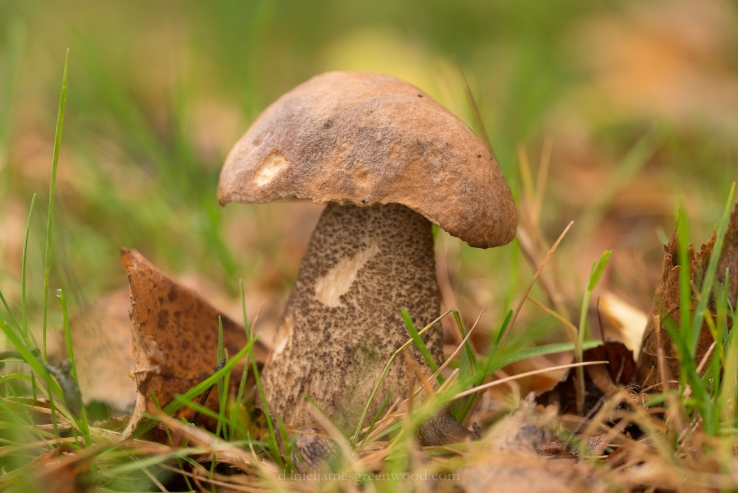 The walk left entered more grassy and open woodland at the edge of the heath. This is a good place to find fungi. This Leccinum or birch bolete was pushing the boat out. Half the shroom had already been eaten on the other side by slugs!

The walk followed on to the edge of Beaulieu Heath. The richest parts of the New Forest are those which don’t suffer from over-grazing. This tawny grisette was in a grassy area of heathland interspersed with oak and birch trees. It should have been an indicator of peak mushroom. It was. 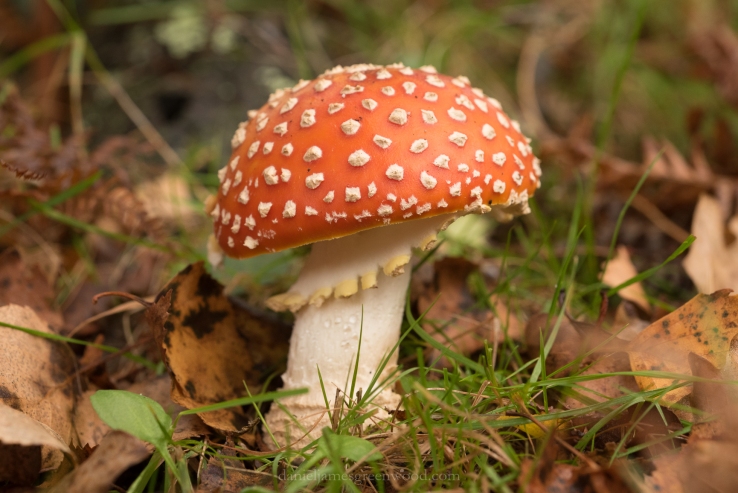 A metre or so away from the footpath this fly agaric was unmissable. I crouched down in front of it to find the best way to get a photo. A family came out of a cottage across the way and stopped to see what I was doing. ‘Oooh, a magic mushroom!’ they said. I didn’t get into discussing how in fact it is a mushroom that has hallucinogenic tendencies and is consumed for tribal purposes in northern Scandinavia. It should also be considered poisonous as standard.

Here is the VIP behind the scenes view. A perfect end to a classic mushroom photography experience. Here’s to more special mushroom days in autumn 2020. The way things are going it will probably be another mushroom reminiscence therapy next week.

Thanks for reading. Stay away from each other. Both of you.

This is part of my Woodlands project

View my full gallery of New Forest photos on Flickr

I hadn’t managed to visit the New Forest since May, when redstarts sang in the woods and the stitchwort and bluebells flourished under the trees. A lot has changed since then, Britain having voted by 52%-48% to leave the European Union. I am pro-EU and on the morning after the vote took place I felt a degree of sadness that The New Forest voted to leave. Why sadness? The New Forest is one of the EU Habitats Directives Natura 2000 sites which is specially recognised for its importance across the whole of Europe. One of the main barbs of the Leave campaign was that somehow the EU was an attack on individual freedoms, especially of local, unique communities in Britain. I disagree with this. The Natura 2000 website recognises that the New Forest is designated as a Special Area for Conservation because of the role that local people play in managing its habitats:

The quality of the habitats of the New Forest, and the rich diversity of species which they support, is dependent upon the management activities of the various owners and occupiers. Of fundamental importance is the persistence of a pastoral economy based on the existence of Rights of Common. The commoners’ stock, mainly cattle and ponies, roam freely over extensive areas of the New Forest, playing a vital role in keeping open habitats free of scrub and controlling the more aggressive species such as bracken (Pteridium aquilinum) and purple-moor grass (Molinia caerulea), and maintaining the richness and variety of heathland and wood pasture habitats.

Then again, don’t ask me what I think about the antics of the Leave campaign, nor the failures of Jeremy Corbyn and David Cameron in alerting people to the importance that the EU holds/held for the environment. If you’re interested there is a petition asking for the EU environmental protections to be upheld if/when Britain leaves the EU. Yet again our politicians and political system have failed to protect the environment.

The Hampshire and Isle of Wight Wildlife Trust’s Roydon Woods is one of my favourite reserves to visit. It was silent but for a few flocks of blue tit and long-tailed tit, and one of only a few insects I found was this lacewing larvae (Neuroptera). It was carrying this backpack around, what I think is tied together by the downy hairs of leaves, possibly willow or hazel. 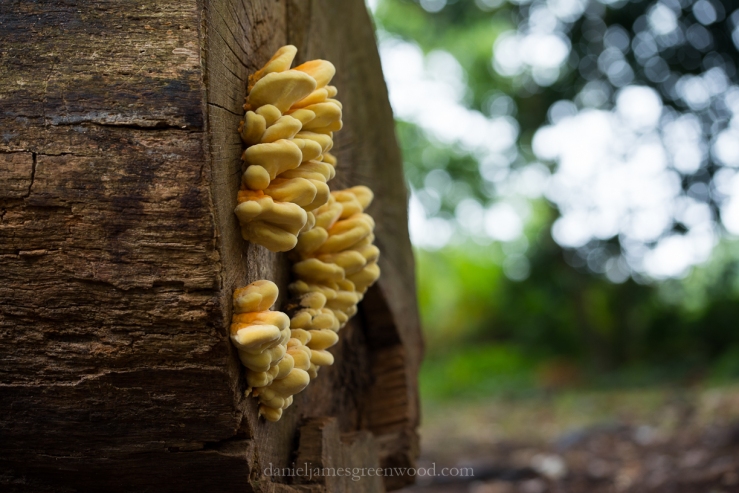 Autumn is a special time, though there has been little rain in recent weeks, there were several large bracket fungi to be found. This is a newly emerging chicken of the woods (Laetiporus sulphureus).

The solitude of the New Forest – most areas away from campsites, car parks and cycling routes are largely devoid of visitors during the week – means you can encounter some wonderful things. I looked up to find a roe deer (Capreolus capreolus) watching me, half way between a field and the woods. There is a clear browsing line in the New Forest and very little natural regeneration of trees because deer and other herbivores, generally New Forest ponies and other livestock, are eating the new growth. Chris Packham has recently said that the New Forest is dying because of over-grazing.

It’s not often that you come across a perfect specimen of a mushroom. Fruiting bodies are short-lived and very quickly deteriorate. To find this giant polypore (Meripilus giganteus) was a moment of sheer joy. As I’ve said in my fungi round-up for last year, I don’t pick them, just photograph them. I’m not precious about this nor hyper-critical of mushroom picking, I just prefer that other people and indeed animals can enjoy them. This mushroom was about 2ft in length and just beside the path. I hope others manage to see it before it decays.

Out on Beaulieu Heath it was drizzling and grey. Stonechats were low in the leftovers of gorse, a flock of medium-sized birds flew overhead and down into the heather which I couldn’t identify. Horseflies dive bombed from the woody margins, the sound of their wings is unmistakable and unnerving. They only want one thing. Along a denser edge of trees and scrub a hare burst free, then came a stoat, turning on its heels at lightning speed to return to the cover of bramble. Spotted flycatcher was also a nice sight at the corner of Lodge Heath.

In the Frame Heath Inclosure forestry operations were underway with mature sessile oaks (Quercus patraea) being harvested. I’ve been reading about the Forestry Commission’s attempts to remove broadleaf species like this from the Forest in the 20th century. It took ministerial intervention and local opposition to stop a near complete shift to conifer plantation.

Sitka spruce (Picea sitkensis) is one of the preferred species for foresters. They are shallow rooted trees liable to windthrow in more open landscapes. This spruce had been taken down by just that, a large hole bored through its middle where the soil had fallen away.

The gentle giants of English oak (Quercus robur) are far ‘happier’ standing alone in the landscape. The reason they are not surrounded by regenerating trees is because of the aforementioned grazing taking place around it. Give me these beautiful old trees any day over a spruce or pine monoculture. We should be thankful to all the people who have fought to fend off intrusive forestry practices in the Forest.

It is these ancient and veteran trees that makes the Forest so unique in Europe. The number of these old trees draws the breath, in areas which are not Inclosures where oak, pine or spruce are planted in regimental fashion for timber, there are just so many of them to be found. 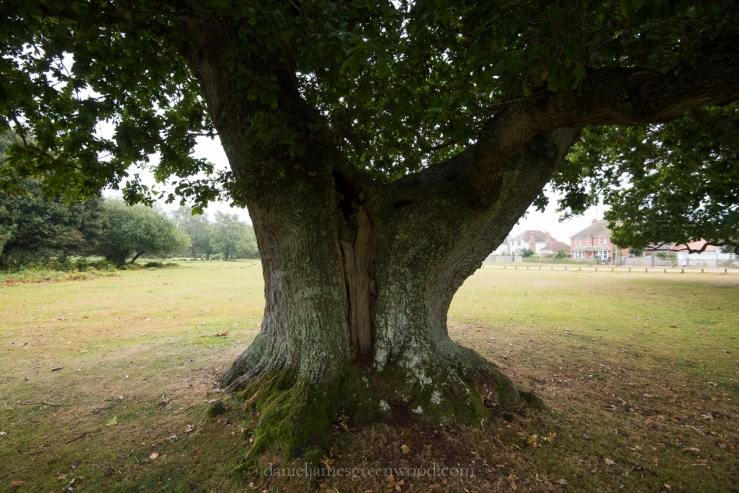 Balmerlawn is close to Brockenhurst and hosts two spectacular old English oaks. This one has a trunk about 6ft and I would approximate it to be over 500 years old.

Next door to it is a younger oak with a massive ‘wolf branch’ as arborists call it, reaching out towards the road. Where it swoops closest to the ground there are two patches where the grass has been worn away by kids jumping up and down over the years. It’s a dream to climb. 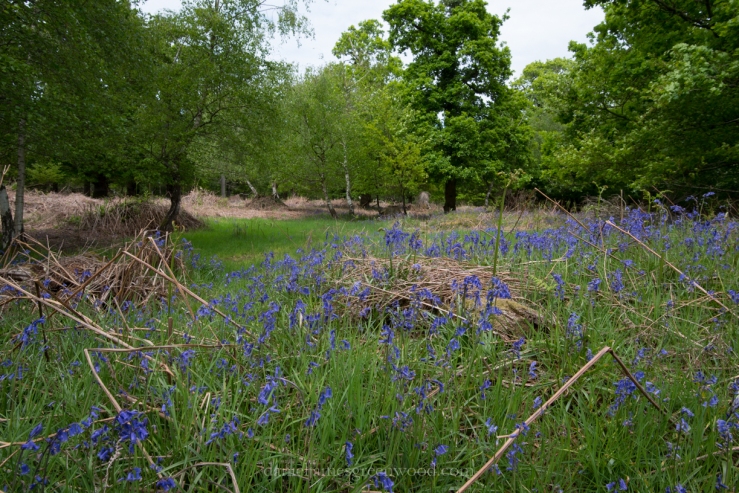 This is part of my Woodlands project 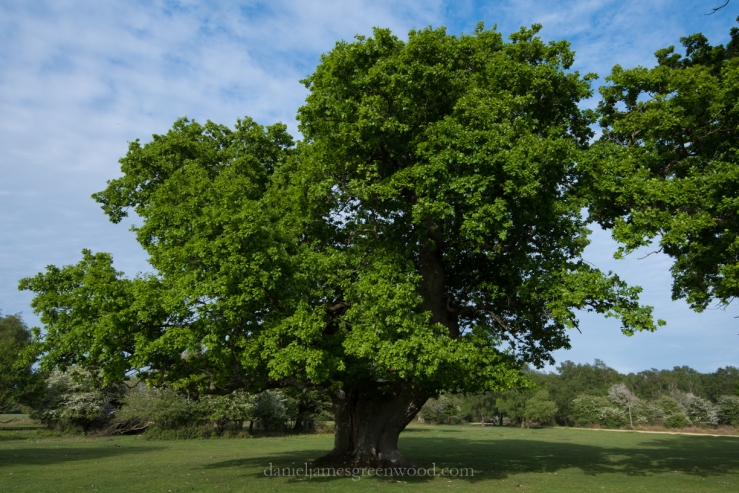 An English boundary oak (Quercus robur) There are an inordinate number of ancient and veteran trees in the New Forest. The New Forest is of European importance for this reason, amongst others. It is a treasure trove of old trees and landscape features.

The New Forest is significant also because of its roaming herbivores, in this image one of the many New Forest ponies can be seen grazing under the boughs of another boundary oak. 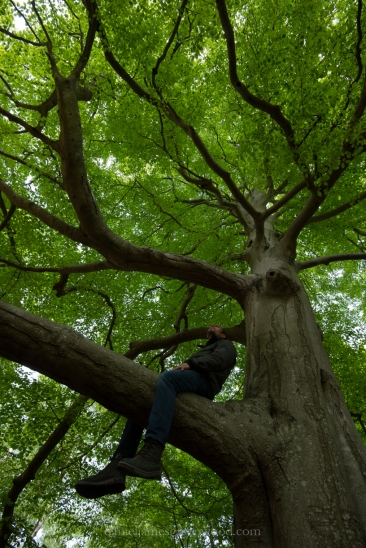 There are also a number of notable beech trees, this one contained an intuitive birder, not a species native to this area. 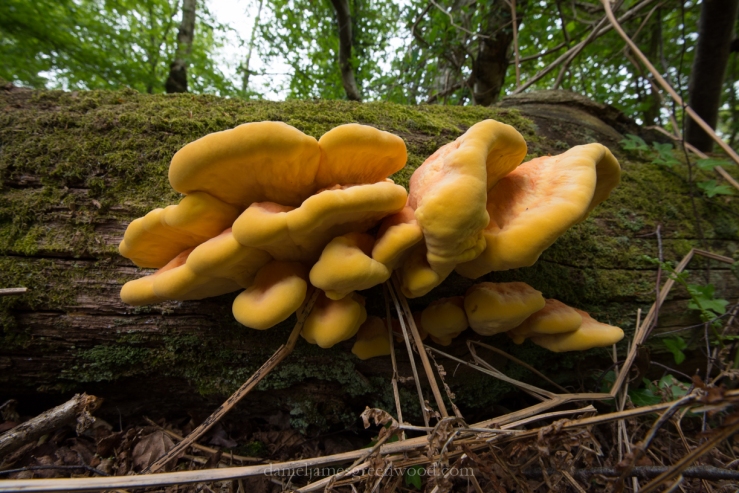 May to June is a good time to spot Chicken of the woods (Laetiporus sulphureus). This specimen was unmissable, it was massive, something like 40-50cm in length across the log.

The breaks of sun in Roydon Woods gave warmth and light to invertebrates on the edges of the paths. This beautiful demoiselle (Calopteryx virgo) was resting on plants growing in a ditch. 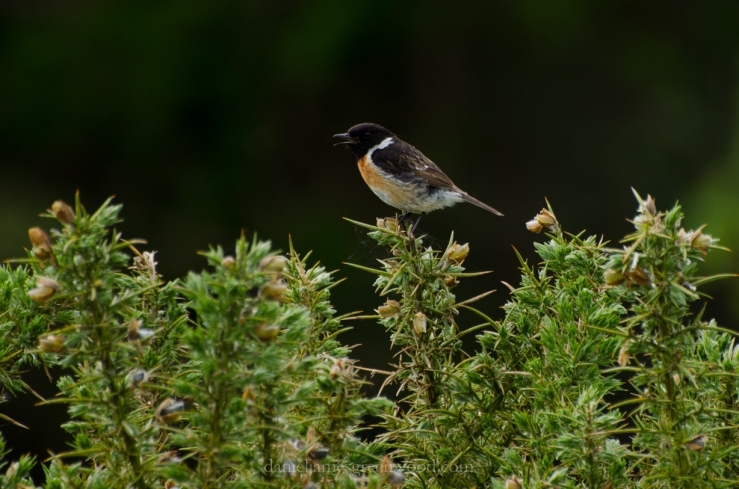 But the New Forest is in fact more heathland than woodland. There were a good number of stonechat (Saxicola torquatus) singing atop gorse bushes out on the heath.

It was a joy and a pleasure to hear cuckoo (Cuculus canorus) singing in the distance. It was an even more pleasing feeling to see this male shoot past us. Spring, it is the most precious time of year.