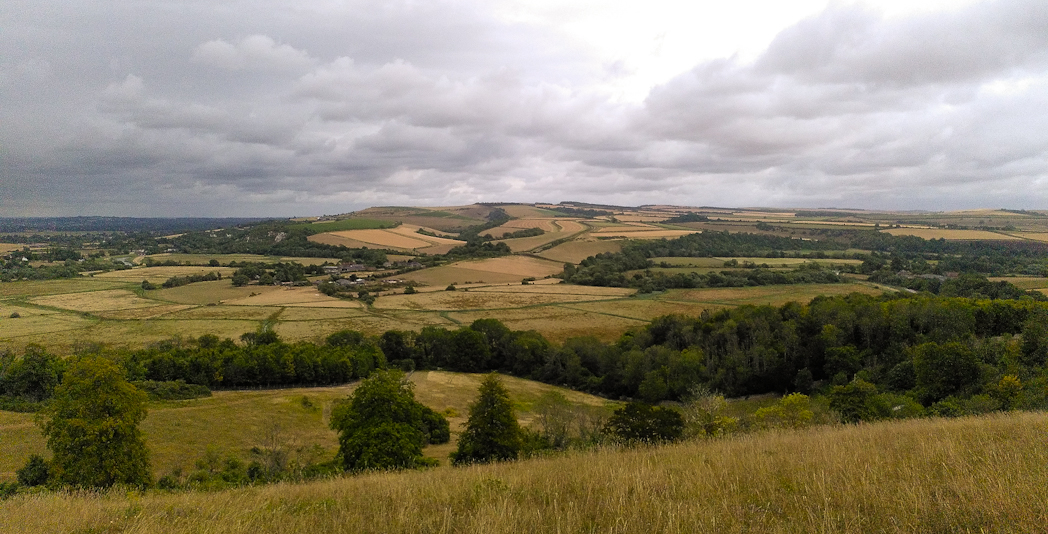 A couple of weeks ago I spent some time in the Arun valley, my local access point to the South Downs. At last some rain came and we watched it shift across the Downs, all the way over to the Greensand Hills in Surrey.

I remember looking at this view in April 2021 after a year of lockdowns and computer screens. I honestly did not believe it was real. Perhaps it was the veil of mist, or perhaps I had developed some mental or neurological disorder from so much time stuck at home.

The Arun valley around Amberley is a crossing point (or perhaps washing point) of the Weald and Downs – where the river that rises in the High Weald’s most westerly point cuts a course through the chalk hills. It has wetlands of international significance in Amberley Wildbrooks and nearby Pulborough Brooks.

Like the nearby Adur, probably better known to people because it passes through the very fashionable Knepp Estate, it used to be a much wilder and freer river.

Along the Arun is the village of Bury, likely to originally have been a defensive point preventing easy Viking access from the coast, up the Arun and towards London, a key trading point (obviously). I recently read a book about Anglo-Saxon England that included some information about King Alfred’s development of ‘boroughs’. These were defensive outposts alongside rivers designed to protect from Viking invasion, which happened so regularly and to great effect in Alfred’s time.

The boroughs were an effective means of defence, for a time at least. I can think of so many placenames that include a borough of somekind: Pulborough, Bury (Lancashire, too), Borough (on the banks of the Thames) and Middlesbrough being the first that come to mind.

The Arun valley at Amberley is a place I first visited through working in the South Downs National Park. My relationship to it is about to change as my time with the National Park comes to an end, but that mixture of professional connection and personal fondness has always been an uneasy one.

It’s the place you can get a train to, which is rare in the South Downs, and enjoy some of the most accessible downland walking. There are views to the North Downs and then south to the coast. The Amberley Downs have glow worms, junipers, barn owls, ravens and rare butterflies like the duke of bergundy. It’s also home to vast monocultures of ‘improved’ grassland that were once rich in communities of now rare plants.

The South Downs was first floated as a National Park contender in 1929 but the devastation to its chalk grasslands from the need to plough it up for crops in the Second World War left it a poor relation to the seemingly untouchable Lake District, Yorkshire Dales and Peak District. It only got full ratification as one of the final acts of the outgoing Labour Government in 2010. The Conservatives who followed have begun to cut National Park budgets through flat cash settlements, despite the effect this might have on such a strongly conservative social make-up (‘the shires’ or ‘blue wall’).

The pre-war Downs were sold as one reason to fight for Britain’s sovereignty from Nazi Invasion in the Second World War. How ironic that they ended up being denuded by the very same need to survive. Once the Downs would have been roamed by shepherds grazing large expanses of chalk downland. Today the South Downs feels in some places like an outdoor factory of intensive agriculture, with miles and miles of fences. It is not a wild place in the way that people imagine American National Parks, which in themselves were not necessarily ‘wildernesses’ either due to prior Native American presence. But it is still an incredible place to witness England’s wildlife and geology,

In Rebirding, a sort of bird conservation polemic, Benedict Macdonald questions the designation of the South Downs as a National Park because of its rolling hills and chalk grasslands, having read this on the website. Ironically the South Downs is one of the most wooded in its tracts of the ancient Low Weald, and home to internationally significant wetlands like those along the Arun at Pulborough. Chalk grassland is also one of the rarest habitats in Europe. It is an astonishing range of habitats, with the dry lowland heath now very rare after the Victorian and 20th-century devastation of the ‘wastes’.

The whole 100 miles of the South Downs, from Eastbourne in East Sussex, to Winchester in Hampshire, has been in my thoughts most days for the past 4 years. The Arun valley now becomes for me that gateway that exists for so many people who don’t have to consider a National Park in its entirety, a psychological doorway into somewhere freer, better and more ‘wild’.

In reality it is far more complicated than that.

7 thoughts on “The Arun valley: gateway to the unknowable Downs”