I was out and about in the Cuckmere Valley in May and had the chance to learn a little bit about some of the species found there. Here’s a small selection of images, a blend of phone pics and some from my camera.

Once again I was treated to the sight of early spider orchids, a plant I blogged about only recently. This was a big surprise, having spent a lot of time looking for them elsewhere. This is a nationally rare plant and I won’t be giving away its location. I did get the chance to learn that the flower mimics the scent of the buffish mining bee. The male bee is lured in and attempts to mate with the flower, thereby pollinating it. In the photo above you can see the pollen grains that have been helpfully, accidentally, applied by the visiting bee.

The mining bees live in the nearest exposed areas of chalk where they drill their burrows. It’s a short commute to their deceptive orchid neighbours.

The blackthorn hedges were holding populations of moth caterpillars that cover the branches in webs of silk. This is the kind of thing that pops up in local newspapers as some kind of wild clickbait. The moth is known as the lackey in English. What the significance of that name (or any of the number of weird moth names) is unclear to me.

We found this proto-Mesolithic (Stone Age) scene, with a discarded King Alfred’s cakes fungus. The fungus had probably been used to maintain the fire of one or more disposable barbecues. The stones were littered across the scorched earth like the throwaways of some prehistoric stone mason.

On the banks of the Cuckmere’s static meanders are ranks of hoary cress. At first I thought they looked like a type of sedum but in fact they’re in the cabbage family. This is an introduced species.

A view back up the Cuckmere meanders, at very low levels for the time of year. Two little egrets can be seen here.

More macro (my tags/categories seem to be broken at the moment – will try and fix them!)

Due to Christmas hols I’m a couple of days late to Fungi Friday on my blog, morphing instead to Mushroom Monday!

A couple of weeks ago I spent some time at Lullington Heath in the South Downs National Park. Lullington Heath is a National Nature Reserve with the super rare habitat chalk heath. It had lots of little waxcaps fruiting at the time.

As you can see Lullington Heath is dominated by gorse which affects the diversity of plants and fungi that can prosper there.

The gorse forms a scrubby woodland and provides ample habitat for one of the most striking species of fungus: yellow brain. It’s also known as witches’ butter, a lovely colloquial name that hints at the role fungi has in British folklore.

This is the yellow brain from the pics above. I cut it out before it was cleared and brought it into the sun. I hid it further away in the gorse afterwards. 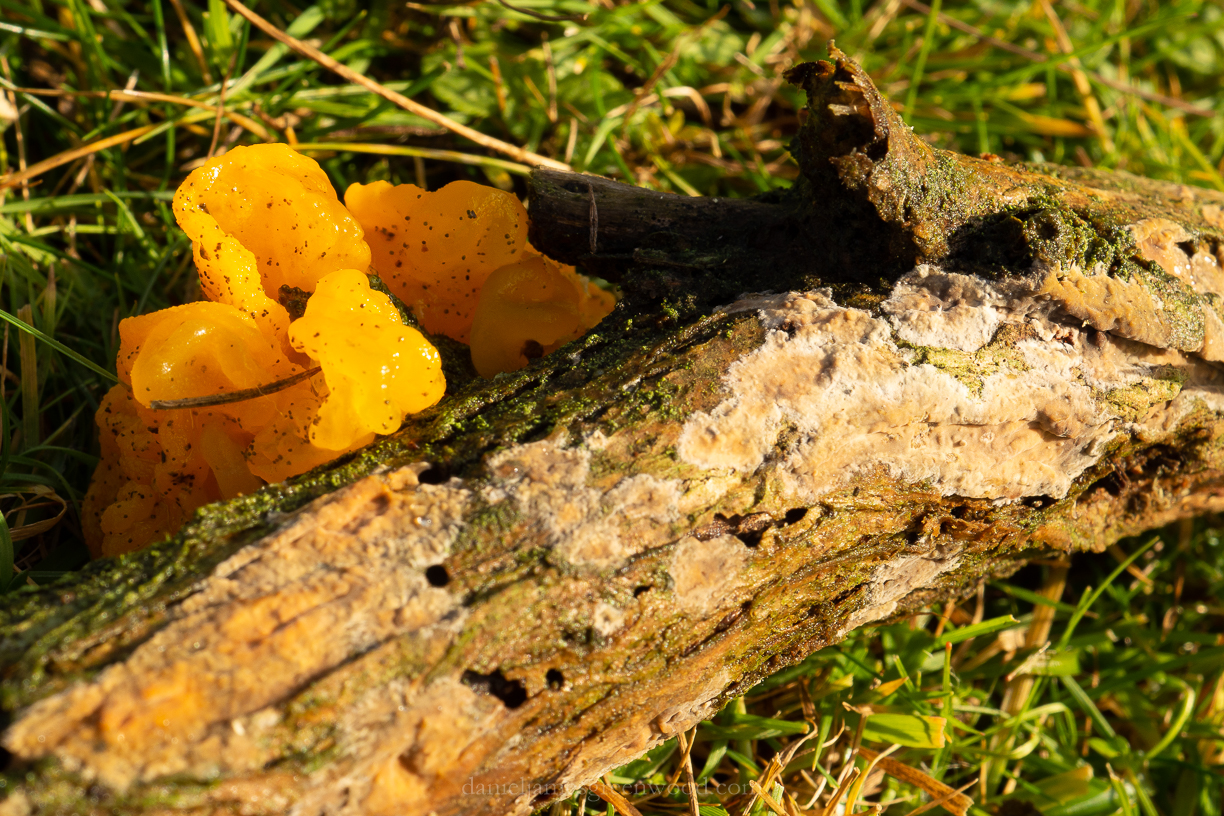 It’s actually parasitic on crust fungi which you can see on the right hand side here.

Keep an eye out for my fungal year 2019, an account of things I found and photographed this year, which I’ll be hoping to post in January.

Merry Christmas to all the funguys and gals out there!