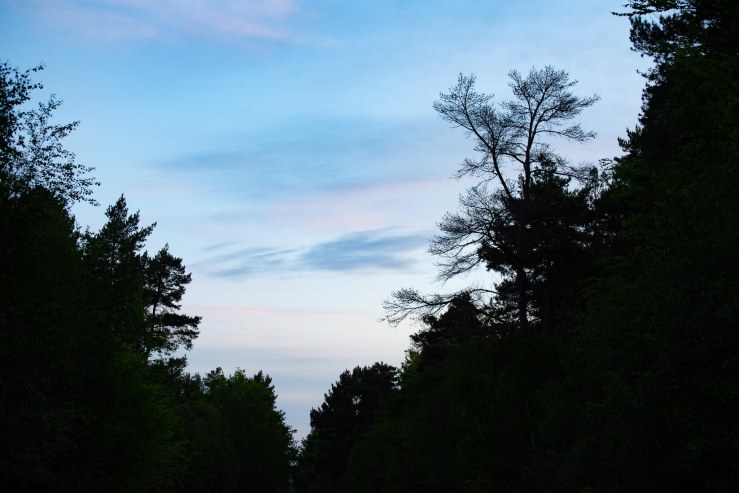 It’s the blue hour and already birdsong rises from the woods: an unbreakable wall of blackbird and song thrush. The thrush pierces through with repetition as the blackbirds pause. Chiffchaff, robin, wren, the cascading song of a willow warbler.

Straight away, the hoot of a tawny owl in the echoing micro-valleys of gills flowing through the woods. Over time new owl sound-posts arise in distant corners of the landscape. 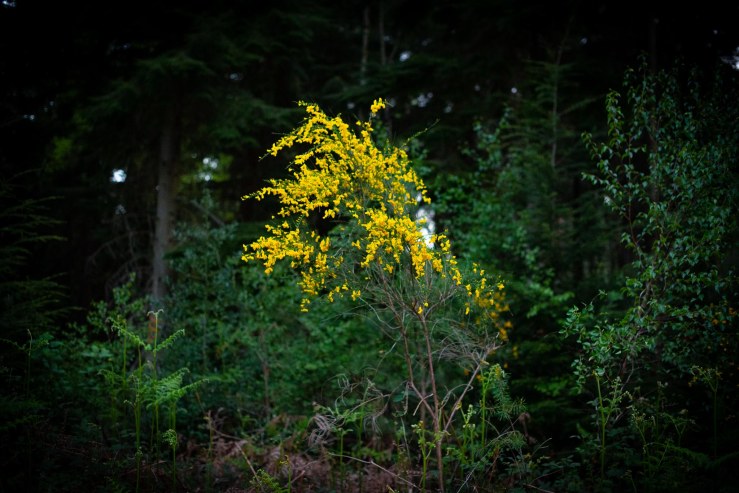 5am comes. In the birchy patches roe deer crash away through old bracken. Their sheer weight can be heard. A roe barks a warning – we have been seen.

The owls’ calls grow with the onset of dawn. The darkness still sits in the beech, oak and birch woodland. Pine, forever green, holds it that bit longer.

A sound from far away, slipping over the owl and deeper into the Weald. The cuckoo, master messenger of spring. We heard him here last year and wonder if he is the same bird back from the Congolese rainforest where he spent the winter. Whoever he is his life has been richer than any human’s could ever be. And the female cuckoo, she too will be hidden away somewhere in silence, listening.

We meet the crescendo of the dawn chorus now. Owls hooting on the crest of song thrush and blackbird. Cuckoo rising over everything. Crows begin the first administrative duties of the day, checking outposts of their web and marking party lines. The owls will not be lost on them.

Down a sunken track enclosed by holly, we notice the shapes of bats hawking. It’s the path we need to take. On approach they disappear, as if they were never there. The mosquitoes landing on our foreheads are glad we’ve moved them on. I’d love to tell them, the bats will be back.

We climb the hill on a winding, muddy path through woodland. The trees are sprawling yew, rotten beech and broken holly. On the thick, black soil holly leaves have fallen. We listen to the spinning coins of a goldcrest’s song as it moves close over our heads in the twigs of a yew. These tiny birds weigh little more than a 20p piece and must eat 90% of their body weight each day to survive in winter.

The light at the top of the hill comes through the branches. Woodland becomes heath of gorse, bilberry and birch. The voices of a walking group echo down as we step up through sandier soils now. A screen of crooked birches are splayed across the view, desperate to keep its secret. Their birchen secret is out.

From up here, the highest point in the South Downs National Park, the Sussex Weald opens out. Soft brush woods are broken by fields where individual oaks express themselves as they once would have, in landscapes kept open by now extinct herbivores like aurochs and wild horses.

Then there are the folding Downs catching in a spill of light from the west. The beechen clump of Chanctonbury Ring, with the heavy metal orchids of Truleigh Hill further east.

A woman is here with her son and his girlfriend, walking the dog. She tells them in a faintly Irish accent that you can see the Isle of Wight on a good day. This is not one of those days.

The families and walkers are dissipating and the view is now ours for a moment. Just as the last person leaves, a call rings out from the woodland we crept up through.

One call, and then the truncated follow-up. A tawny owl, calling from the rafters of the Weald at 3pm on a Saturday afternoon. 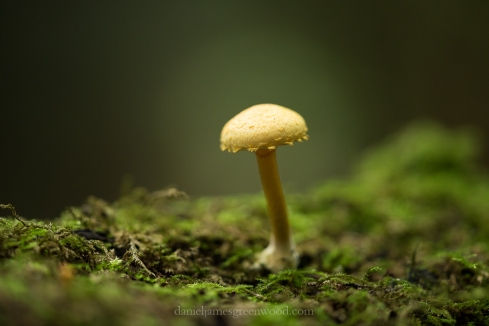 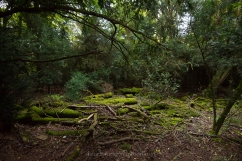 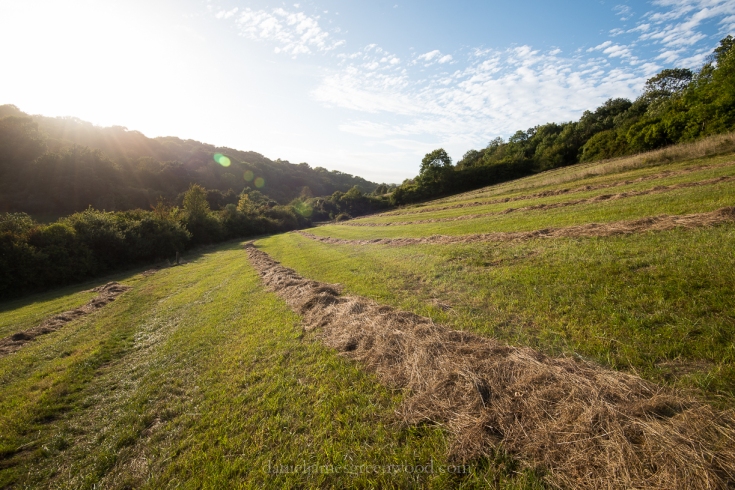 It’s dry and dull on the downs, wild carrot and ragwort desiccating, but house martins migrate overhead as they begin their return to Africa. In the damp and shady nooks of Devilsden Wood’s rotting logs the mushrooms sprout. The first I can find is a tiny bonnet rising out of beech leaves, one such leaf topped by an aphid. There is a spread of what I think are webcaps, orange-yellow in the wood dark. Now I remember the ache of kneeling for so long, gently turning the focus ring of the lens to catch the right part of the mushroom: the serrated gills, the skin of the cap. Overhead the soft calling of a tawny owl comes, at four o’clock in the afternoon. I’ve noticed this for the past month, with owls calling at two and three o’clock. The jays begin to rouse with their piercing shrieks, they are the principle mob leaders against the tawny. But no ruckus is forthcoming. I’ve read that tawny owls actually call more commonly in daylight rather than under darkness. Reading about them only this morning I learned that owls are better at hunting at dusk and some species are aided by an increase in moonlight. The jays are right to be worried, with birds taking up the largest chunk of a tawny’s diet. Under a decaying beech trunk dressed in moss the shape of a wood mouse trails into the cover of the leftover bark, another species fearful of the owl.

Away from the fungi I take a closer look at an old horse chestnut perhaps some 200-300 years in age, planted as a boundary marker on the edge of Happy Valley. It stands out beyond the still verdant hazel coppices with its floor of red crinkled leaves. It’s often the first to leaf and the first to leave. Out beyond the trees in Happy Valley the sun casts long shadows, the lines of hay the shadows of recent cutting, soon to be bailed, probably sold on to feed local grazing animals through the winter. I don’t quite know. Elsewhere on the North Downs these rows of hay are burnt, its value no longer universally high across the chalk. The sun sets over Devilsden Wood, the sheep grazing in the golden September light. All appears well in this remnant of downland past.

More from my North Downs diary 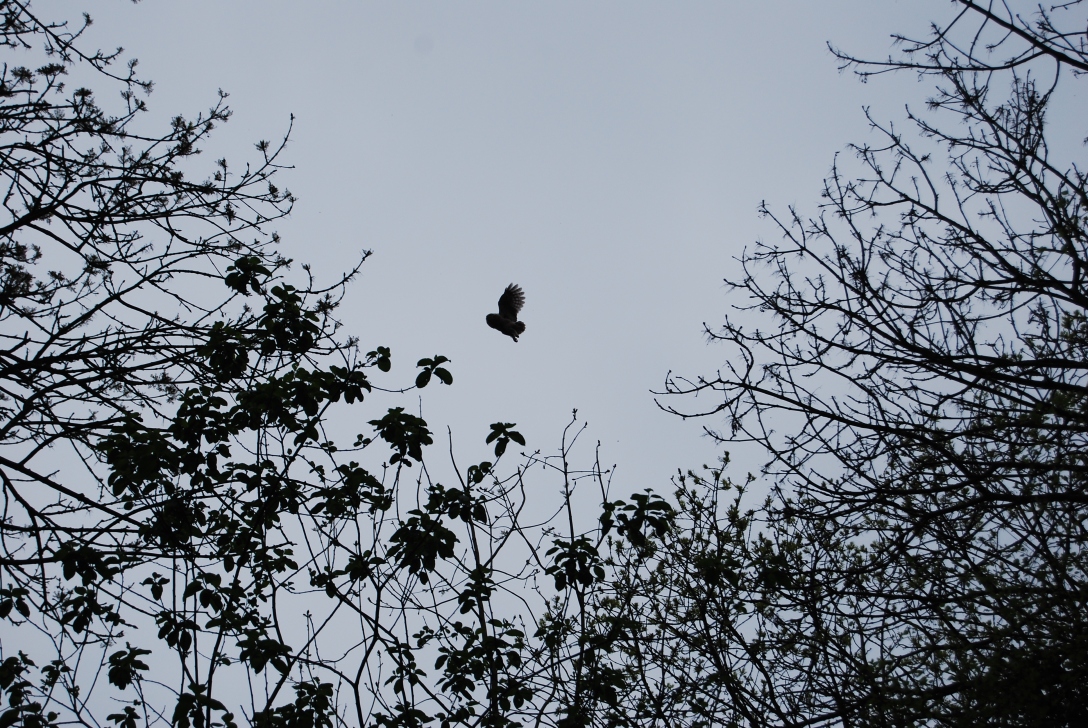 All rights reserved by Daniel Mikhailovich