I stand on the long, straight track that cuts through the heart of St. Leonard’s Forest. I recently looked for it on a map from the 1870s. I thought it might have been a 20th Century addition to ease forestry operations. To my surprise, it was there cutting through what today remains a heavily wooded landscape.

Looking around, it’s probably even more wooded now. In the 1870s, the woodland was likely oak and beech with holly underneath. Where pines now stand abandoned to nature, heathland probably expanded over more open areas.

The name ‘forest’ actually denotes open land where laws once controlled gathering of natural resources and the hunting of animals, with brutal consequences for rule breakers. ”Aforestation’ was the implementation of Forest Law on more land, often at the expense of entire vilages of people. 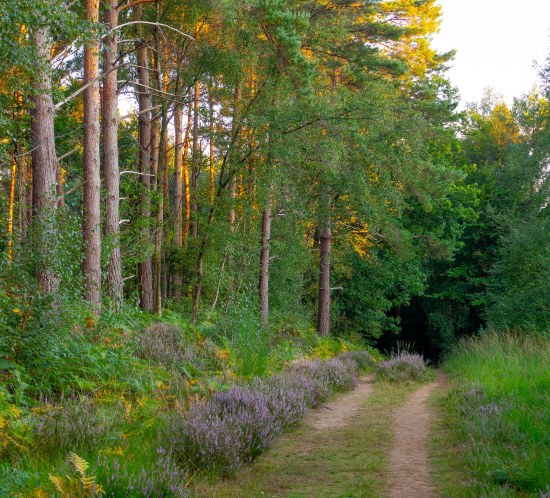 At one point in history, a third of England was subject to Forest Law. It was a landscape of oppression, violently enforced by England’s Norman conquerers after 1066. The management and control of deer was a key part of the Norman forest landscape.

The track is endless in this crepuscular light. At the edges ditches are stuffed with bracken which has yellowed in the August heatwave. Sudden explosions of heather interrupt the vertebra-like leaves of the bracken.

Ahead I can see two people or animals. The light is fading, the sun has slipped beyond the pines. As I get closer I can see one is a roe deer. The other figure has gone. The deer are grazing the edges of the ditches, stopping to check on my progress. I’m moving slowly, but hurrying with my hands to change the lens on my little camera to one with more reach. I get closer but it doesn’t fear me. It turns and walks away into the dark woodland.

Walking further down the old track, a pathway, broad and green appears on my left. Two fallow deer are looking at me. They must have been grazing with the calm roe I have just passed, but they are less accepting. They scarper, one zig-zagging and leaping to distract what is a would-be predator.

Then, from the bushes, a roe deer has been startled and lurches across the path into the undergrowth that the fallow deer has disappeared into. Squashed into that small green lane, that burst of animal limbs felt almost like watching a stampede. 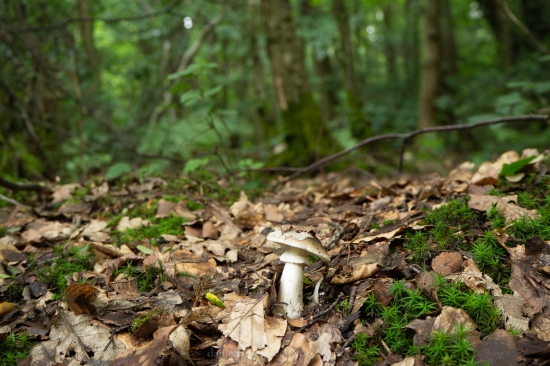 Gentle rain falls as dog walkers share tales in the car park. Squirrels saved from their pet’s jaws giving thanks with a bite of their own. Birdsong swells from the understorey, perhaps five song thrush sing to sure up territories. Either side of the track is a wall of green, from the shrubs to the canopy of oak, birch and beech.

There is a feeling of a deeply wooded landscape here, the continuity of the Weald stretching away east to Kent. Of course it has now been broken, so many times, but there is a sense of the wilderness that faced the Romans and later the Saxons upon their respective invasions of Britain. It is thought St. Leonard’s Forest was part of a wooded landscape that stretched all the way to the New Forest, as recently as a thousand years ago.

The rain has drawn me out here. It is such a relief that this June is one of mini-monsoons, compared to last year’s heatwave hell. The nearby South Downs were rendered brown for months. At the side of the path, under the darkness of a beech, mushrooms glow. They sprout peach-coloured, or maybe apricots on sticks, from a tree stump. They are sulphur tuft, one of the most common species but very photogenic.

Further into the forest chiffchaff sing from the pines, a distant willow warbler’s melody decaying in the darkening evening air. There is a scale to this landscape that feels expansive. Woods challenge our human senses of depth and time. Moving along the footpaths the woodland shifts from clay where beech and oak prevail, to the pine and birch dominated sands where heathland once was kept open by local people expressing their rights of common.

Down a track through birch and holly a single flute-like note comes from the trees above my head: a bullfinch. It calls over and again. It’s a beautiful sound.

Returning round through dark areas of oaks and veteran beeches, I find a small toadstool uprooted at the edge of the footpath. It’s an amanita of some kind, a ring around its neck like Shakespeare or a ruff, patches of white webbing still on its grey-brown cap. Amanitas are a fearful family of mushrooms, being home to the deathcap and destroying angel, to name but the most potent. But I’m not here to eat these marvels of nature, so I take my photos, capturing memories to take back to the town, to ease the sense of dislocation from this ancient wooded landscape, its bullfinches and mushrooms.