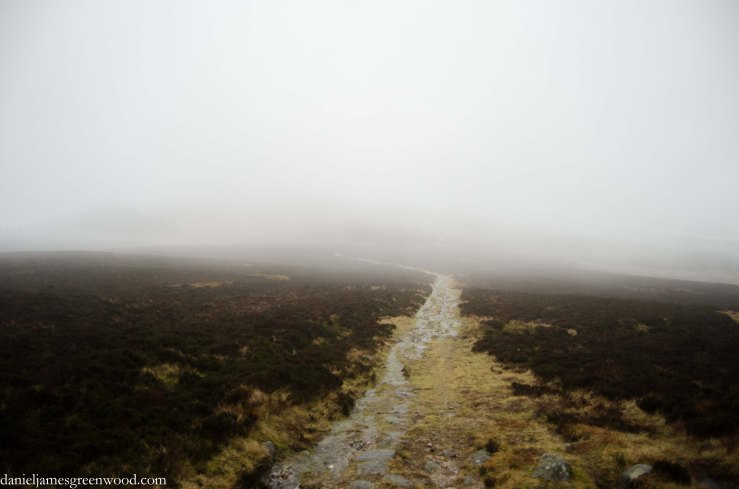 A wading bird bursts from the bog. I watch its sharp wings cut into the wall of mist and descending treeline. I put my binoculars to my eyes and the bird is lost. The world has been reduced. All terrestrial life but for water, a few lichens, heather and wintry moor grasses has escaped. I have left behind oak woods overcome by rhododendron and cherry laurel, and Cairnsmore Burn choked by the former, its water crashing from the shadows. It was not right. Snowdrops still managed to create small rugs of white flowers and winter green leaves. Bluebells peeked through the leaf litter amongst them. Behold the denizens of Galloway’s oldest woods. Up here those are images in the mind. The life in the lap of the Cree estuary – the buses, postman, trees and gentle flowering plants are mere memory. The cover of Glenure Forest’s regimental spruce is the last notion of protection. It’s now up to willpower, my body and clothing. The path leads clear from 20 metres, visibility coming and going with cloud. 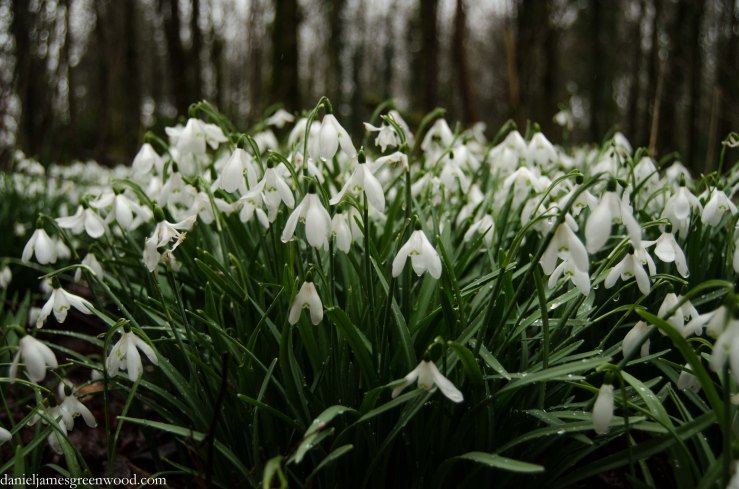 I climb over a wooden ladder and the landscape ascends suddenly from 400m towards the 711 that marks Cairnsmore of Fleet’s summit. I have not seen a single person since snowdrops. Why would anyone want to be here? I come for the brutal solitude, even if I wanted to see another person I couldn’t. I come because I know that people once had no choice but to walk this path, a path that zigzags and climbs, an uncomfortable choice of jutting rock or slippery grasses. I attempt to find a rhythm on stone. The path curves east and the winds propel me on. I see boulders and mistake them for cairns – this is not the summit. My thighs are soaked, woollen gloves, too. I took my jumper off some miles back and now need it. It’s sodden and looped around the strap of my bag. The winds are harder, colder and the rain splatters against me. What the guidebook called a nice introduction to Galloway’s hiker’s paradise has the makings of a minor ordeal. Water streams down the rocky path as I step up and through it. The music of the running water cuts through the wind, it’s almost all I hear, but for my own mutterings. I can say what I want now, no one can hear me. There will be no repercussions. I cherish that. 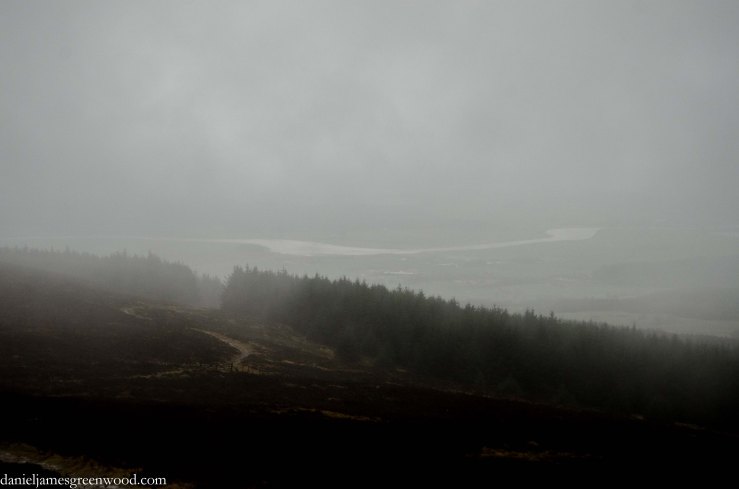 The false sense of the summit has given me energy. I’m so hungry. I begin to see my breakfast as vital, I value it differently, as something I was fortunate to have. I see the first cairn of the summit approach and slump down behind it onto wet stone, moss and crustose lichens, barely protected from the gelid gusts. I push some cheese into a crusty bread roll and swallow it. I feel the onset, the flickering of panic. The wind and rain has thrashed me, and I didn’t realise it had or that it might. Visibility is now down to 10m, I put my gloves back on, the cold hammering without, almost burning. I think of real mountains and feel stupid. Hills aren’t to be taken for granted, either. My glasses are blotted by rain on both sides, I recall my friend’s maxim that the descent is worse than the climb. There is no notion of friendship here. The supposedly fine views of the estuary are not on my mind just now. I tread blindly back the way I came, finally removing my glasses. The path of rock, the fog, the bog, it’s all clear. There is no need for detail. I tread in hope and long to see the cloud drift and for the undetectable sound of the wind dropping. The spruce trees appear again, black and warming, even a glimpse of the Cree. From the bog two grouse explode into the air and I leap in surprise. It’s the start of a world I can live with.

2 thoughts on “The flickering of panic”