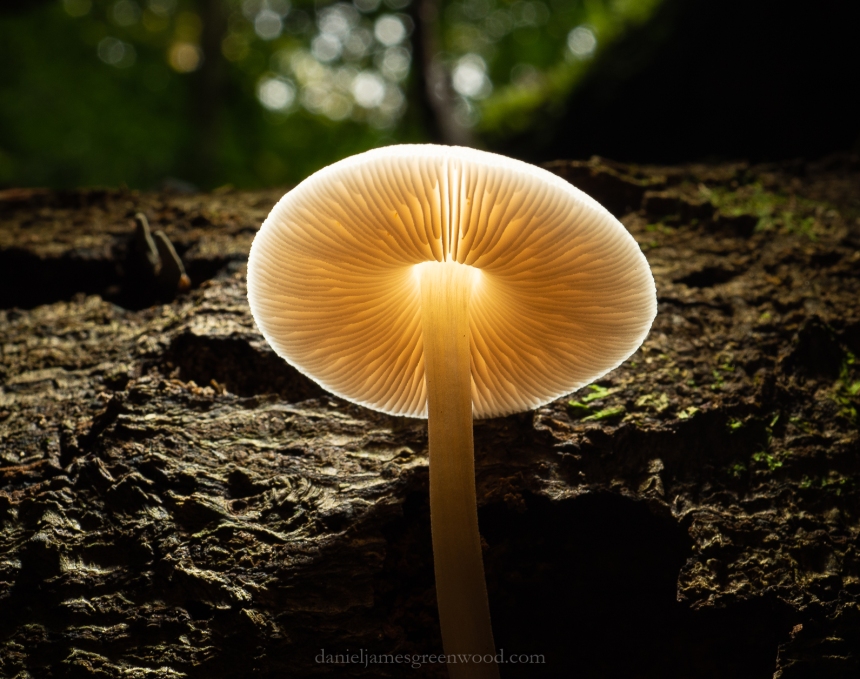 Looking out of the window at work one morning, a colleague agreed with me:

If there are no mushrooms after this rain, then something is very wrong with the world.

Fast forward a few hours and there is something ok about the world. 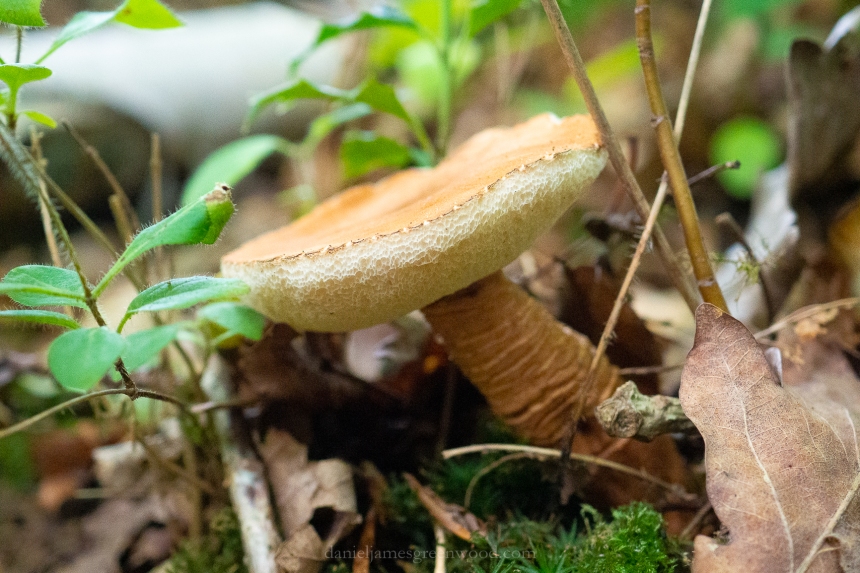 Stepping out onto the track and into the woods there was a clear indicator of a mushroom party with lots of Boletus-like species typical of the season. This time, I was invited. All too often looking for mushrooms can be like arriving at a party the morning after when everyone is discarded like shells around the living room and slime coats the walls. 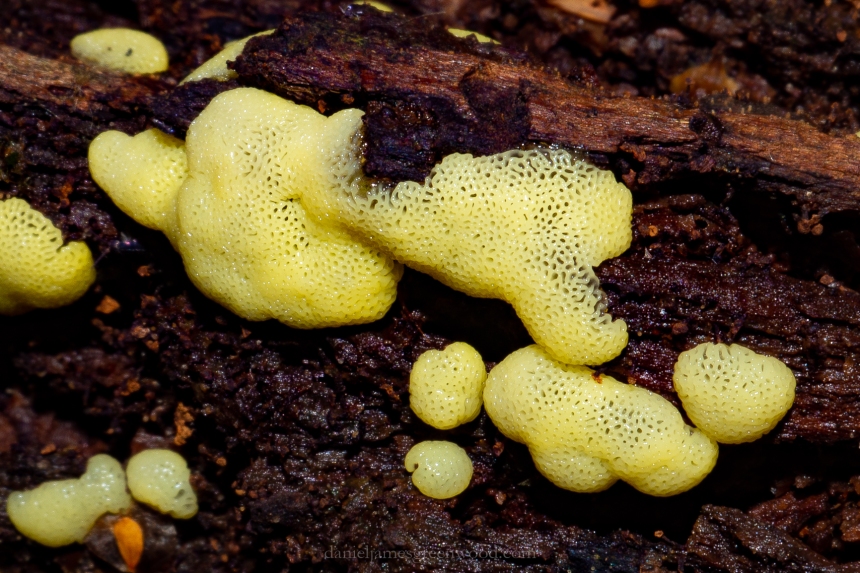 There was still slime on the walls on this pleasant summer’s evening at Sussex Wildlife Trust’s magnificent Ebernoe Common. It’s part of the Low Weald, an area or ancient woodland that is very much intact and once connected Canterbury with the New Forest. The slime here was the real deal, with beautiful splodges of slime mould spreading across fallen oak trunks. 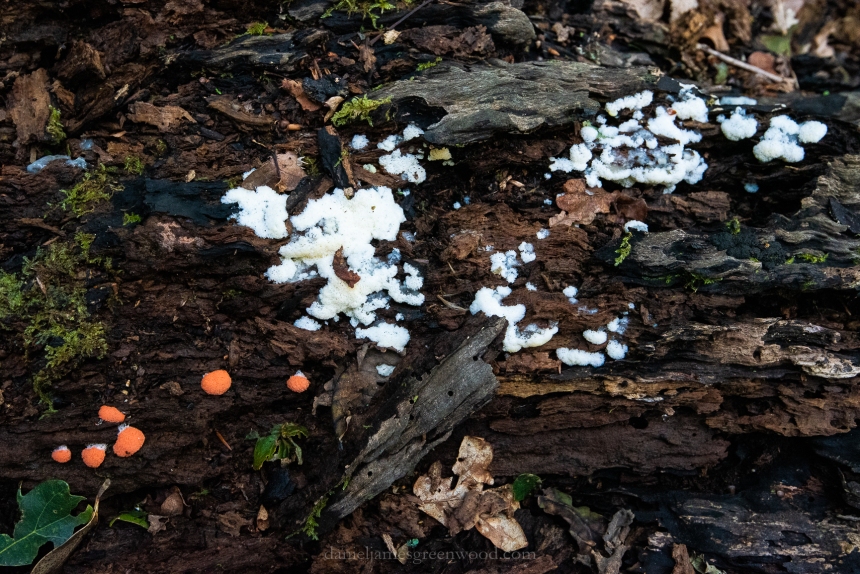 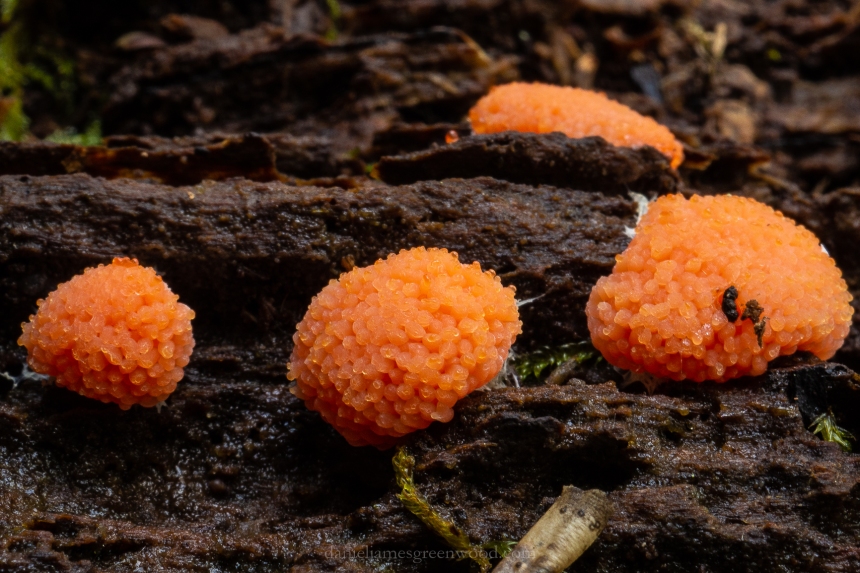 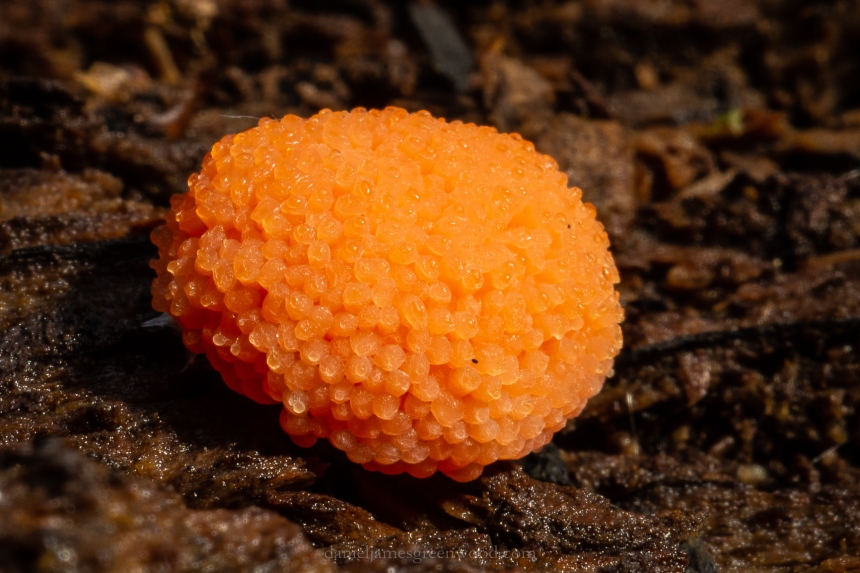 Further inspection with my trusty macro lens showed the intricate beauty of this slime mould. Trouble is I don’t have the field guide yet so I’m stuck for an identification. But really does it matter? I’m not a scientist in the traditional sense and it’s their beauty I cherish most. Scientists, while we’re here, don’t even know where to put slime mould in their taxonomic kingdoms. That sounds like one hell of a euphemism. 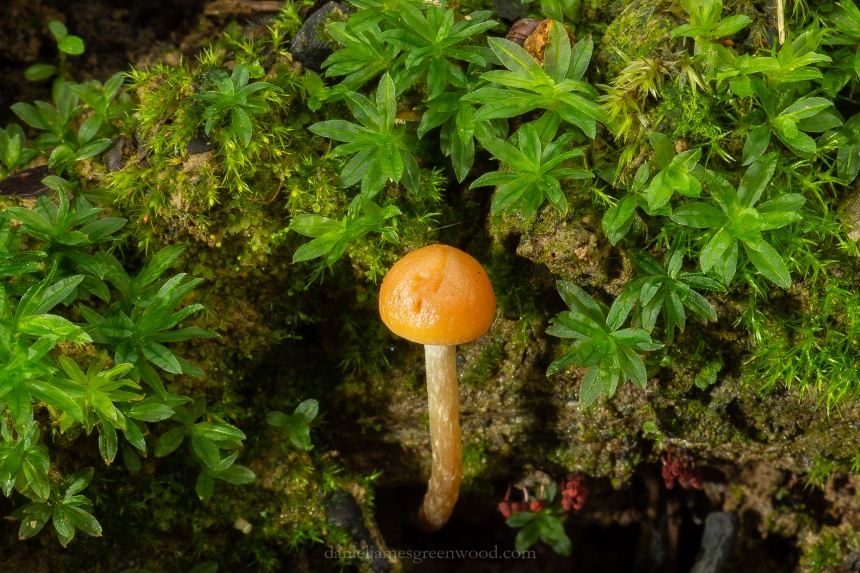 This walk was a blitz of about 3 miles with eyes scanning the woodland floor alongside the path. By pure fluke I found this small mushroom, not dissimilar to something like a funeral bell, popping out of the soil. It is surrounded by the most beautiful palmate leaves of star mosses. The wonders of macro photography allow this world to be glimpsed and indeed shared. Macro photography is an art (not necessarily in this case) as fine as landscape photography. 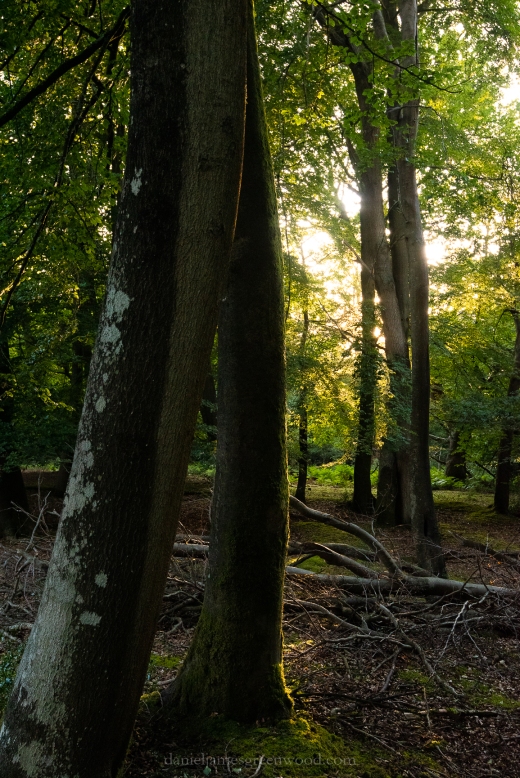 I also had my larger DSLR slung round my neck with a wide angle lens. The golden hour is not quite so golden in an August wood, but it’s still worth appreciating. Notice the growth of lichens and algae on the north-facing side of this beech here for 10 points. 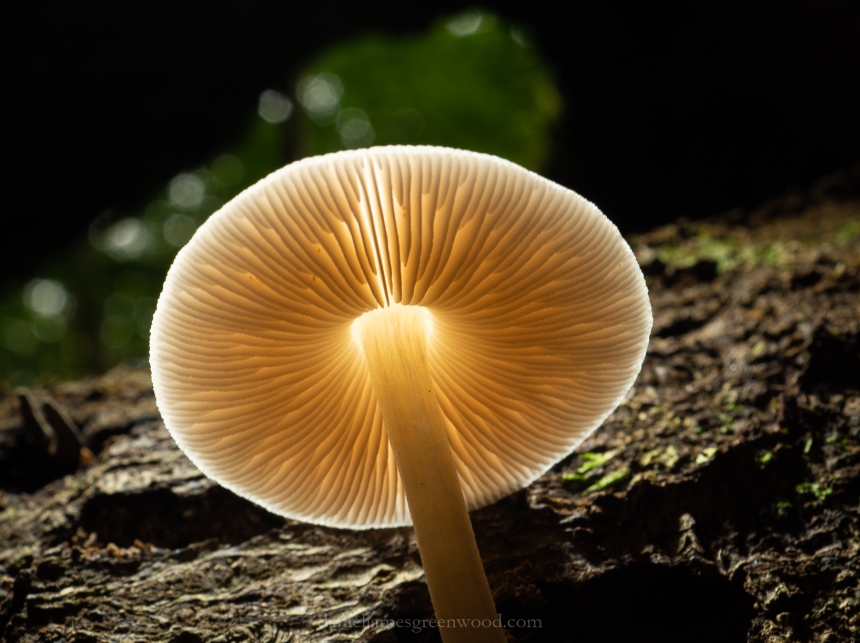 One of the recent additions to my mushroom portraiture war-chest is an LED light. It’s a pretty fun way to add a new layer of interest to photos, especially of mushrooms. I also have a mini tripod for it so it is a bit like a pet android that wanders the woodland floor for me illuminating fungi. This shroom was growing down between two big boughs of a fallen beech tree. It was land of the mosquito and I made substantial donations to their bloodthirsty cause. This does look rather angelic if I may say so. 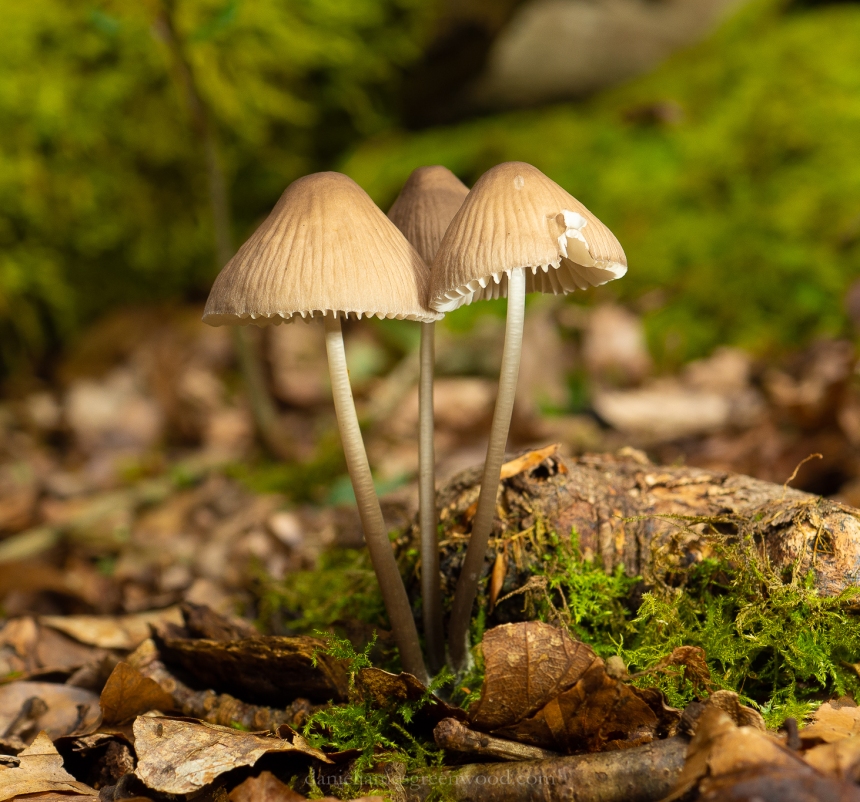 A trio of bonnets were evidence of the recent rain. Up they spring before collapsing not long after. 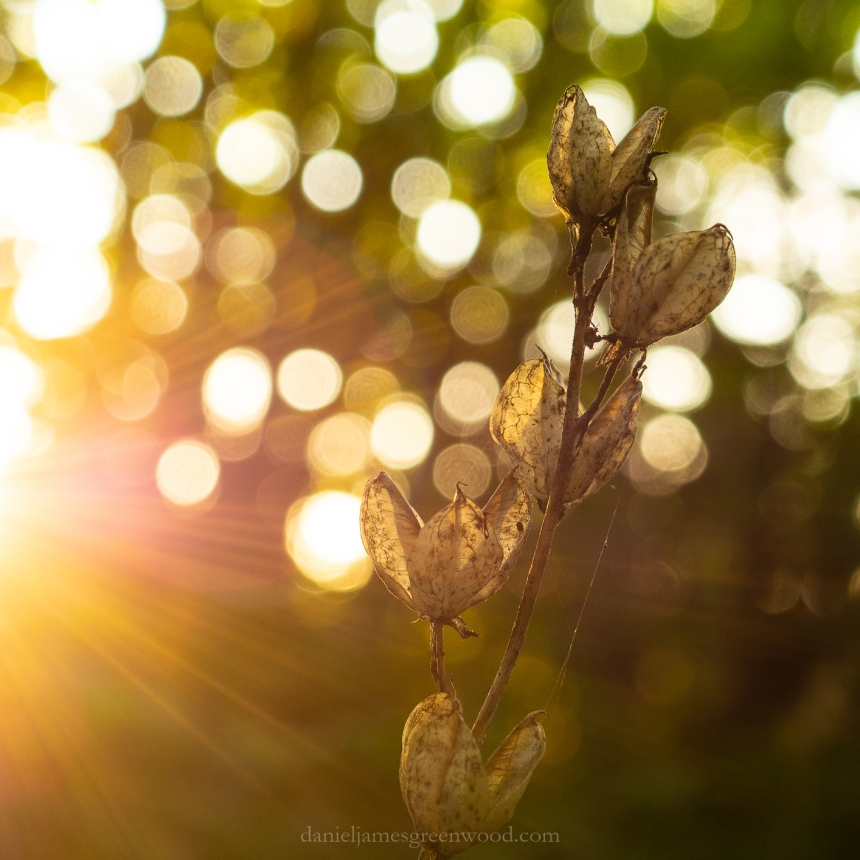 Have you ever noticed just how long bluebell seed casings linger after spring? It’s a good way to identify an ancient woodland out of season. This flower was present on the edge of the woodland where a field opens out. The sun poured in and lit the tulip-like papers of the bluebell. 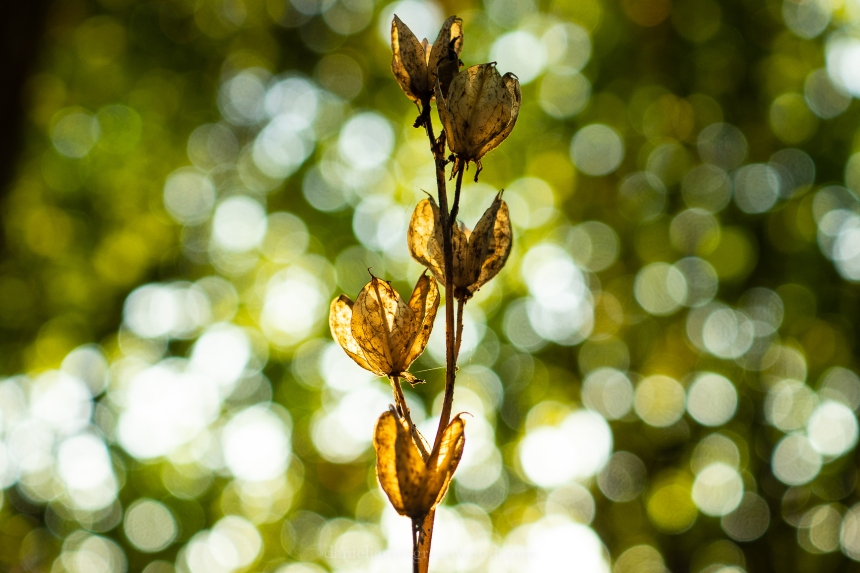 My dad said he read my last post and had to look up what ‘bokeh’ is. It’s the circles or light in this image above that are caused by isolated areas of light. They are most pronounced when you have a wide aperture, so f1.4 on my brightest lens but usually f5.6 on most SLR lenses. It creates a beautiful blurred effect. Of course, I couldn’t resist it here. Looking at this image being photographed in the moment, what you can’t see is the twinkling of the light as the leaves moved in the breeze and the sun slid down. It took the breath far more than the image ever will.

Happy #FungiFriday everyone! 🍄 . We may be in hibernation but fungi is still out there making the world go round, feeding the trees and recycling all the organic matter on the heap! 🌍 . Today I'm reminiscing about a mushroom classic in autumn 2019. Things are dry and difficult to get to out there right now as you may have heard! 🙉 . You can see more pics in my #FungiFriday blogpost by following the link on my profile. . . . #fungi #mushrooms #fungusamongus #shroomstagram #shroomatnoon #macro #macrophoto #macrophotography
Decided to keep this pic. Looking for mushrooms with @spagheddielegs in the Carpathians, SE Romania, April 2015 🍄
The bees are back! 🐝 . This little solitary bee was enjoying the amazing spring sunshine we have had in Sussex this week 😎 . It's getting to be insect macro time, especially with all the time in the garden to come over the next few weeks (at least). Looking forward to meeting some new insects this year! 🦗 . . . #macro #macrophotography #gardensafari #sussexwildlife #insectsofinstagram #insect_macro #instanature #beesofinstagram #bees
The first cowslips of the year appearing in the South Downs 🐄 . Rather than being a trip hazard, these primroses are so named because their leaves look like a cow's lips (apparently) 💋 . Hence where its relative the oxlip gets its name 🐂 . . . #cowslip #primroses #spring #springflowers #southdownsway #southdowns #sussexwildlife #wildflowers
Spring is firing itself up out there 🌄 . Weeping willows have a beautiful glow about them when they are coming into leaf. . I for one will be spending as much time in green and open spaces when I can in the months ahead. Do not underestimate the good it does to us all. . . . #spring #signsofspring #weepingwillow #willow #sussex #treesofinstagram
This yew tree is 1200 years old! Check out its CV: . Brexit ⏳ Second World War ✔️ First World War ✔️ Napoleonic Wars ✔️ English Civil War ✔️ The Plague ✔️ The Norman Conquest ✔️ A sapling during Viking invasions of Britain 🍼 . Trees have all the answers. . . . #ancienttrees #southdownsnationalpark #southdowns #treesofinstagram #trees #farmlife
%d bloggers like this: