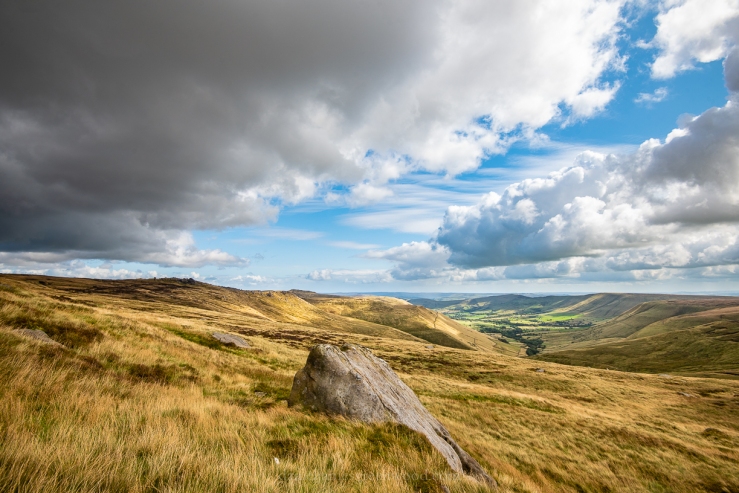 View my route for this walk on View Ranger

In September I visited the Peak District for the first time. I was heading up north to visit family and wanted to check whether an old friend’s claim to being a ‘northerner’ was accurate. He’s from Chesterfield and has accompanied me on several walks shown on this blog. Turns out that as a native of Chesterfield he might actually be a Midlander, anyway, nevermind that and apologies for any offence caused. 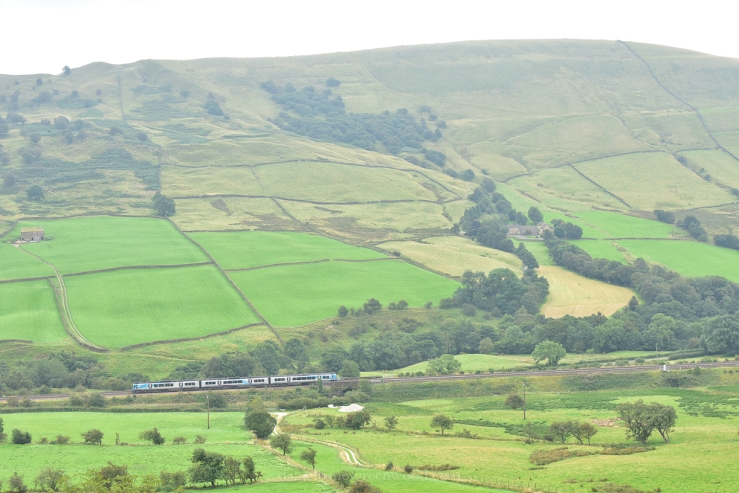 The walk was 12 miles in length and a circular from the YHA in Edale. It’s a fantastic place to stay with really nice staff. The YHA straddles the slopes of the Edale valley. I said to the man working at the YHA that the valley took me completely by surprise when arriving, it comes out of nowhere. He said that despite visiting it every day it did the same to him each time.

My aim was to get up onto the Kinder Scout plateau, a place famed for the mass trespass that took place 1932. Our public access to the countryside is a precious thing. It’s under attack from some landowners who don’t want members of the public walking across their land, by footpaths being forgotten and going un-walked, but it would have been even worse were it not for the interventions of a group of ‘young communists from Sheffield’ in the 20th century. It is said that their intervention led to the National Parks Act of 1949.

Edale is nestled in amongst the woody riverine margins of Grinds Brook that runs down into the River Noe.

The Peak District is a rural landscape of grazing land and heather moorland. I’m not defending grouse shooting here, but National Parks in the UK are designated as cultural landscapes. Our ‘wildernesses’ are not devoid of people. It was the Industrial Revolution that made the Peak District what it is today above its bedrock. In the UK people have to be part of the landscape for its protection to be ensured. 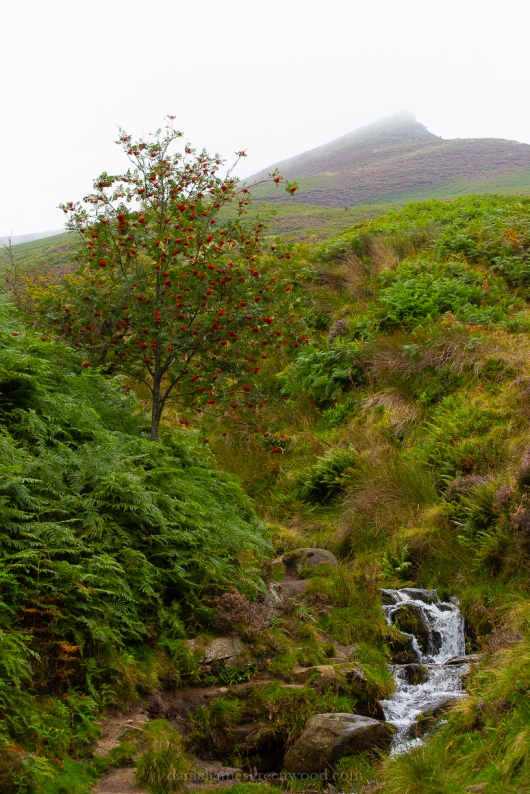 Like many areas of hilly heather moorland, rowans are a common occurrence and point to its other common name of mountain ash. In September they are possibly at their most alluring with their masses of bright red berries earmarked for the tummies of redwings and blackbirds.

This is a view up Grindsbrook. I have to admit, being out of (proper) hillwalking fitness this was a challenge. The track becomes bouldery, not helped by the heavy rain that arrived as I began. It being a Sunday morning, it created a bottleneck of walkers struggling up onto the top of Kinder Scout. After this photo I put my camera away and focused on the ascent. 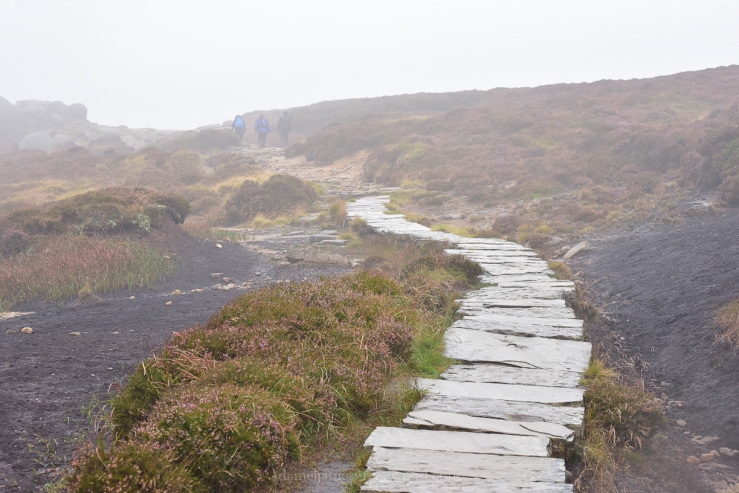 The rain was so bad up on Kinder Scout that I only took photos of the trackway heading north-west rather than the views into the Edale valley, and I have a waterproof camera! The rain and cloud had swallowed the views anyway.

When the mist began to blow away, it created mysterious ranges of exposed gritstone and Sunday ramblers.

Some of the rock formations were like ancient stone sculptures.

The clearing mist gave stunning views into the gulleys and passes of the Peaks.

The walking atop Kinder Scout is tough. It’s a labyrinth of peatlands and bog. The mist closed everything in and gave the sense of moving through endless corridors of black soil. Fun is not quite the word to describe it.

As you can see, the path was difficult to keep. You need a compass and a map to be up here, View Ranger was very helpful in give a sense of my proximity to the general route. But mobile phone GPS is not reliable in these places and you need to know where you’re going.

The sun slipped through for a minute and lit these totemic outcrops.

Reaching Kinder Downfall was a relief. The sun broke through and blue sky appeared. The wind was so strong that it blew the water back up the fall. Kinder Scout is a Norse name, likely named by the Viking settlers present in Britain between the late 700-900s. I love this fact about Britain. When you look back at British history you fail to find a mono-ethnic, English culture.

The warm sun here helped to dry out my coat and trousers (which I was still wearing of course) and lit the rock formations. As if clouds eventually grow heavy like stone and fall to the earth to rest like this in the hills.

Kinder Reservoir was constructed in 1911 and can be seen in the centre of the image here. 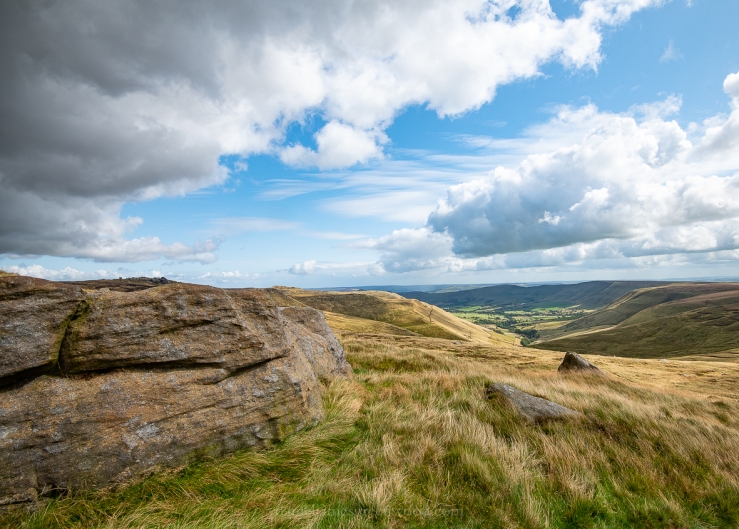 The light spread across the moors, the wind blew through the grasses and clouds broke across the sky.

There were lots of people of all ages and backgrounds rambling on this Sunday afternoon. This is the approach to Jacob’s Ladder. The deeply worn hills show the impact of many thousands of years of water running from their summits. 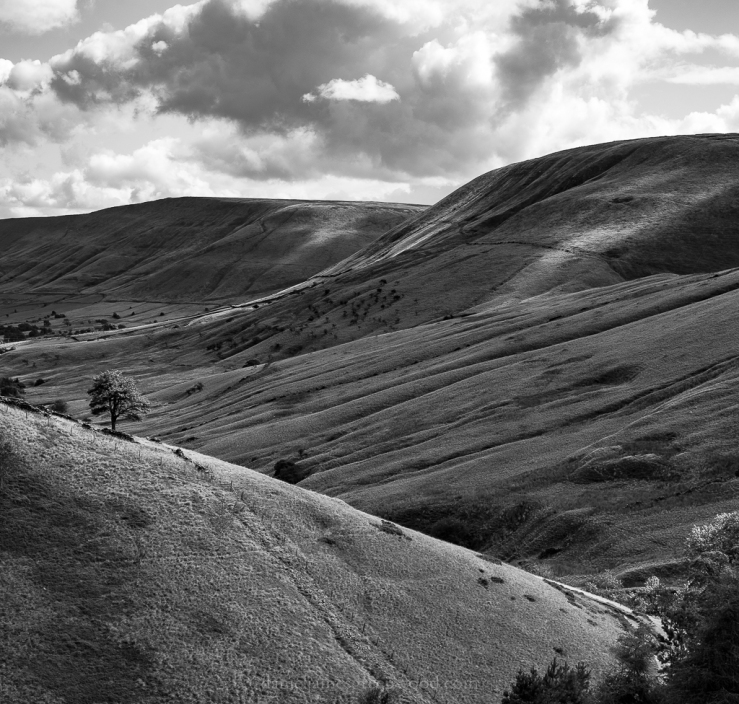 A monochrome view into the Edale Valley from Jacob’s Ladder.

I was drawn to the sight of hawthorns against the hills. They look like people. It’s a wood pasture of sorts that is found in the Yorkshire Dales below the moorland level as well. I love hawthorns. 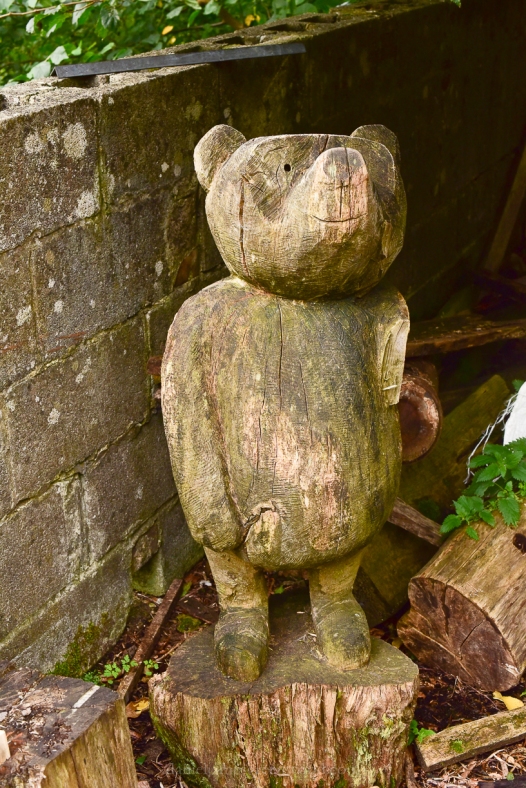 At Lee Farm this wooden Pooh bear was greeting walkers from its home in the wood shed.

The rain came and passed away again on my return back to the YHA. 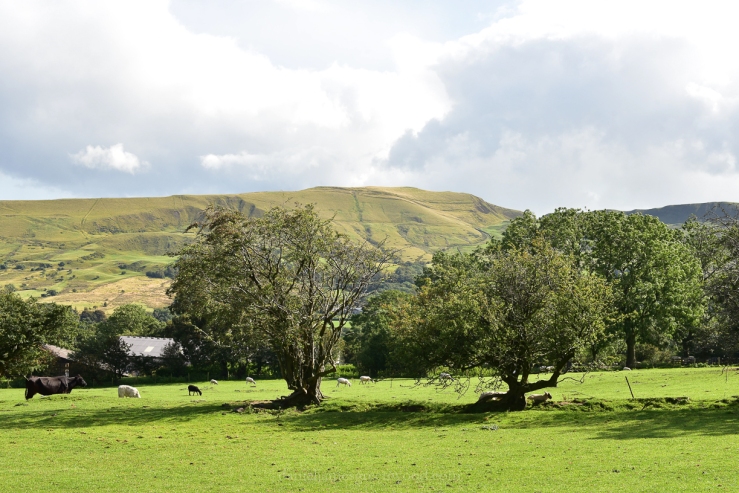 What was probably the line of an old hedgerow can be seen here with two beautiful veteran trees, hawthorns sheltering sheep. 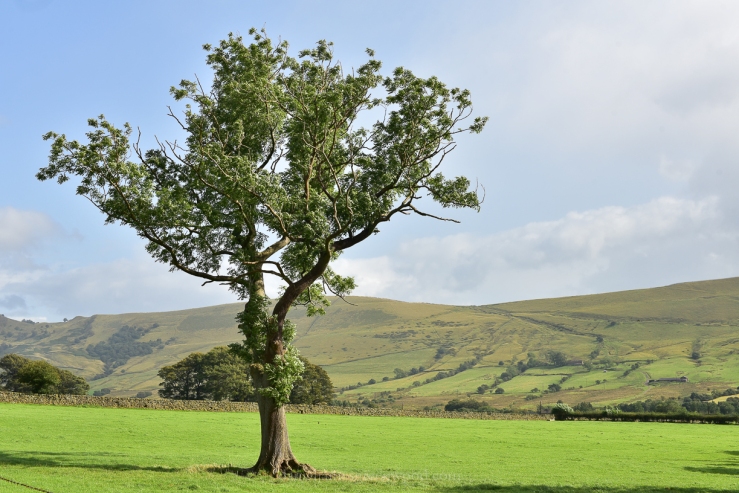 Sadness lingers in the countryside in the shapes of our dying ash trees. In the Yorkshire Dales, in Scotland, on Dartmoor and the South Downs our ash trees are succumbing to ash dieback disease. So, too, in the Peak District. I have to photograph them as a record for what our landscapes used to look like. Hopefully more resistant genetic strains will emerge from the mist like boulders in the Peaks and rock on for millennia to come. 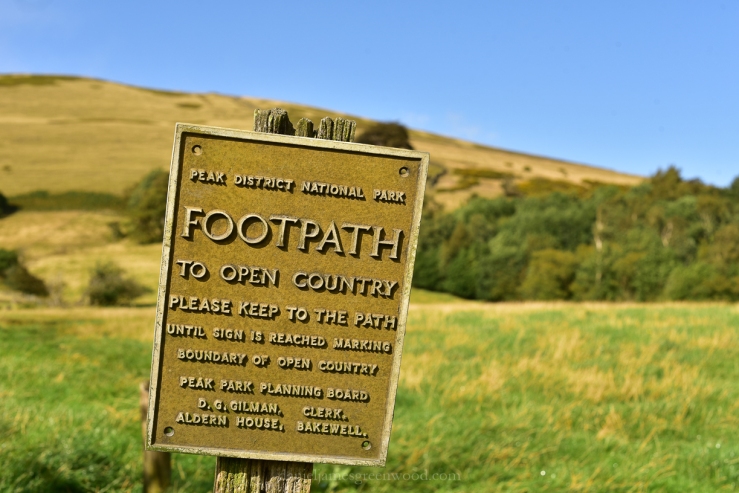 What a beautiful phrase: footpath to open country. Take me there (no, really, please I’m dying it’s been 12 miles).

Holly is another of the veteran trees you find in moorland landscapes along with hawthorn. This was a stunning tree blown east by the wind rushing through the valley. 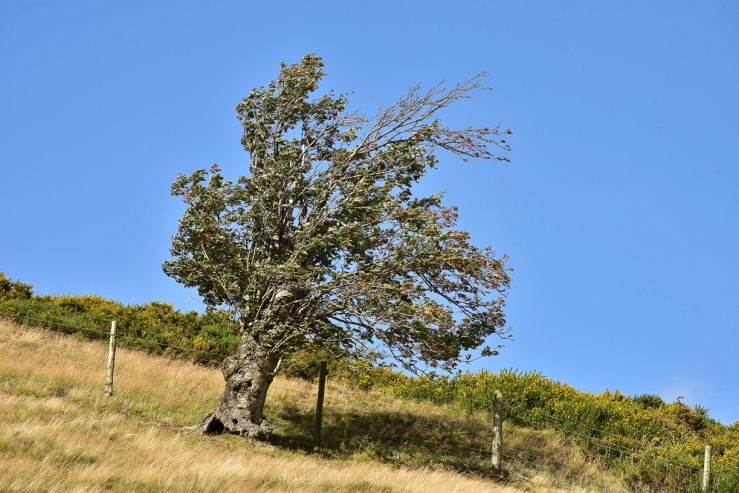 This is special. I noticed a massive rowan tree at the margin of field and gorseland. It is the largest rowan I have ever seen in the UK. I tweeted about it and the brilliant writer Mark Cocker asked me where it was. Mark Cocker is a ‘hero’ of mine having been inspired by his assiduous observation of rooks in Crow Country when I first became interested in the genre of ‘nature writing’. Mark said I should write something about this tree but really I only passed it. I was so tired I didn’t have the energy to pull myself up the hill (off the path!) and get a nicer photo of it with my wide angle lens. Instead, hopefully Mark will write something about it?

The sun shone in the valley and the Peak District in all its glory was on show.

Views across to the other side of the valley showed the various stages of the landscape. The screen and exposed geology, the rampant woodland and scrub, held off the by the farmer’s drystone walls and sheep. 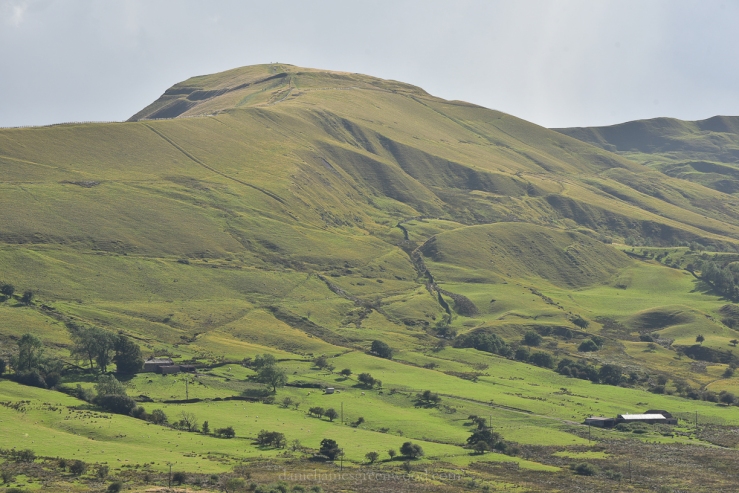 To end, the summit of Mam Tor where once an Iron Age hill fort stood. Can you imagine what it must have looked like, high up there overlooking the landscape with its wooden walls and torches burning at each corner. Next time I visit I intend to get my butt up there and see how it might have felt for our ancient ancestors, within the Countryside Code, of course.

6 thoughts on “The Peak District: struggling through the mist on Kinder Scout”