Mayo is Ireland’s only dark sky park, internationally recognised for its low levels of light pollution. Basically it’s super starry. Here are a few images from the front door (the only door) of my family’s cottage in northern Mayo. 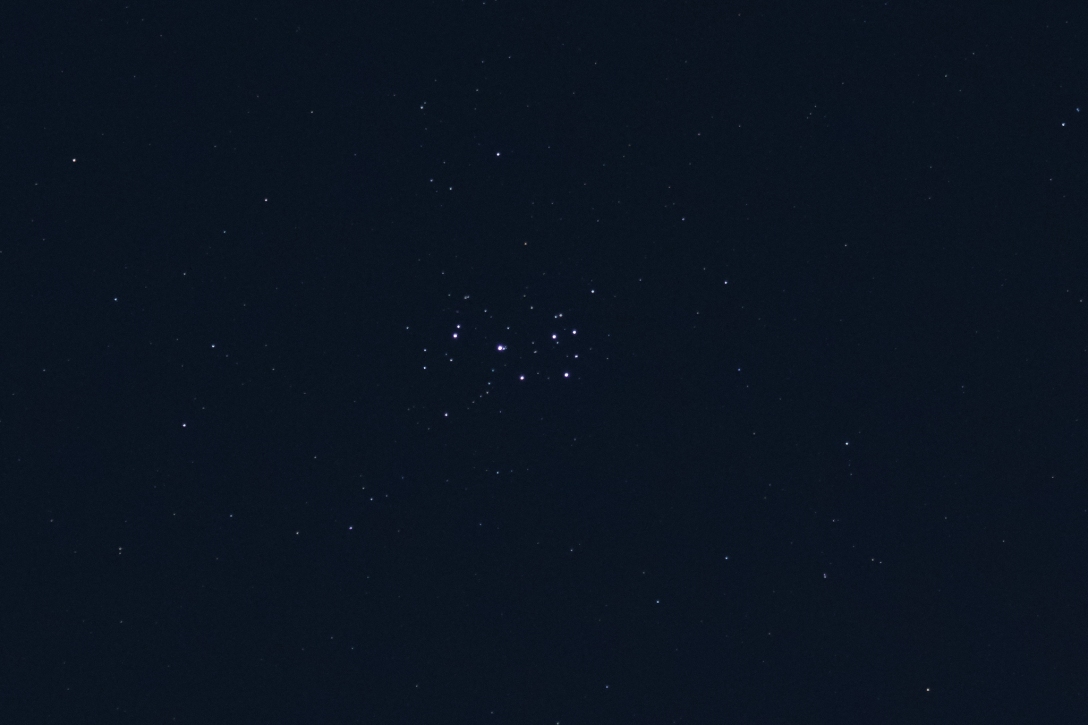 On the evening of Wednesday 19th January at about 21:00, I spent some time photographing the winter night sky. I was in my West Sussex garden, where there is a surprisingly good clarity of starlight despite the nearby town and railways, etc.

A few nights before when it was a bit cloudier I spent the time just looking through binoculars at the stars. As someone new to stargazing, I was amazed by the gains made from looking through glass. In among the cloud were hundreds of tiny stars where nothing appeared to the eye. This will sound quite dim to more seasoned observers, but the difference made was a joy.

One little cluster I had my eyes on was the Pleiades. This appears to the naked eye like a dusting of light, to the east of Orion. Looking through binoculars gives much greater clarity. On Wednesday night I used my camera to get some images, later cropped and edited a bit in Lightroom.

The Pleiades is made up of seven larger stars, giving it another name of the ‘Seven Sisters’. That’s the third time that name is used, to my knowledge, in place-naming alongside the Seven Sisters cliffs near Eastbourne in Sussex, and the main road in north-east London. The Seven Sisters road is named after elm trees which are no longer there.

The above photo by Carlos Budassi is obviously not as good as my attempts (JOKE). It does, however, help to illustrate this star cluster beautifully. I’m not sure of the camera, lens, settings or editing required to produce this image but it is of astonishing quality. Also, how good of Carlos to share this image with Wikimedia Commons so people can use it. Thank you, Carlos.

The first known depiction of the Pleiades comes from the Bronze Age as seen in the image above. Wikipedia titles the image: “The Nebra sky disk, dated circa 1600 BC. The cluster of dots in the upper right portion of the disk is believed to be the Pleiades.” Indeed, there are seven of them.

The name ‘Pleiades’ is said to come from the Ancient Greek and is related to sea-faring rather than the Seven Sisters.

Latest from the Blog

It has been a torrid spring and summer for street trees in southern England. We are breaking all the records for extreme heat and also enduring drought conditions. Street trees have it tough, not only because of the lack of rain but because it can be hard enough for them to access water anyway. That… END_OF_DOCUMENT_TOKEN_TO_BE_REPLACED

If you live in Britain you must be sick of hearing about it: England recorded temperatures of above 40C this week for the first time on record. Wednesday the 20th July was 230 years in the making, and it didn’t feel great. Why 230 years? The Industrial Revolution is described as beginning around the 1790s… END_OF_DOCUMENT_TOKEN_TO_BE_REPLACED

The fungus capable of mind-control 🍄

In June I was down on the Sussex coast at the mouth of the river Cuckmere. During a bioblitz event I was supporting I discovered something I never expected to see.… END_OF_DOCUMENT_TOKEN_TO_BE_REPLACED

These long, cold nights are a good chance to spend some time exploring the night sky. In mid-January we’ve had a number of gloriously sunny days and clear nights. After one of the dreariest Decembers on record in the UK, with only an averaged total of 27 hours of direct sunlight, it is very welcome.

The clear nights have given me so much to photograph: starry skies followed by frosty, foggy mornings with beautiful light.

Tonight (14th January) I spent a bit of time in my garden with my full-frame DSLR and a 50mm lens with an f1.4 aperture. That’s a very bright lens, meaning it collects a high level of light which is very good for astrophotography. My garden is packed in among several others, so when one neighbour a couple of doors down pops out, they usually see me as a man standing there in the dark. It can be quite awkward when you say things like, “I’m trying to get a photo of Uranus”.

I couldn’t even manage that. Here’s what I did get:

Orion is my go-to constellation. I find it easy to identify and does help to anchor my eyes in the night sky.

Hoping the diagram above makes sense to you. Orion’s belt is the most obvious part of the constellation. Don’t mess with Orion!

My 50mm lens is bright but it doesn’t reach very far. That said I did crop part of the image to capture part of the Orion nebula (‘Gt. Neb.’ in the image above).

This is one of two new constellations for me that I photographed: Gemini. It’s probably not that easy to make out but it covers the whole of the image. I think also that I tilted the camera to much which makes the two anchoring stars on the left hand side (Pollux and Castor) out of sync with the diagrams. Come on, it was dark out there!

The second of the two new constellations for me was the head of Hydra, which can be seen as the clearest collection of stars here.

I was amazed to read that Hydra is the largest constellation in the night sky. It’s not surprising when you later see the diagram and how huge it is.

The orchids in need of fungi 🍄

In June I did a long walk in the Surrey Hills around the famous Box Hill. The North Downs are absolutely fantastic walking country, being so easily accessible from London via public transport, having some of the UK’s rarest wildlife, along with dramatic hilly landscapes and views. … END_OF_DOCUMENT_TOKEN_TO_BE_REPLACED

And so to the final week of the 30 days of macro photography challenge.… END_OF_DOCUMENT_TOKEN_TO_BE_REPLACED

See week one and week two via these links. Day 15/30: looking around my Mum’s garden in London, I was harnessing the softer evening light and hoping some insects would come and bask. Lo and behold, this large red damselfly flew over my shoulder and landed on a leaf half an arm’s length away! Day… END_OF_DOCUMENT_TOKEN_TO_BE_REPLACED 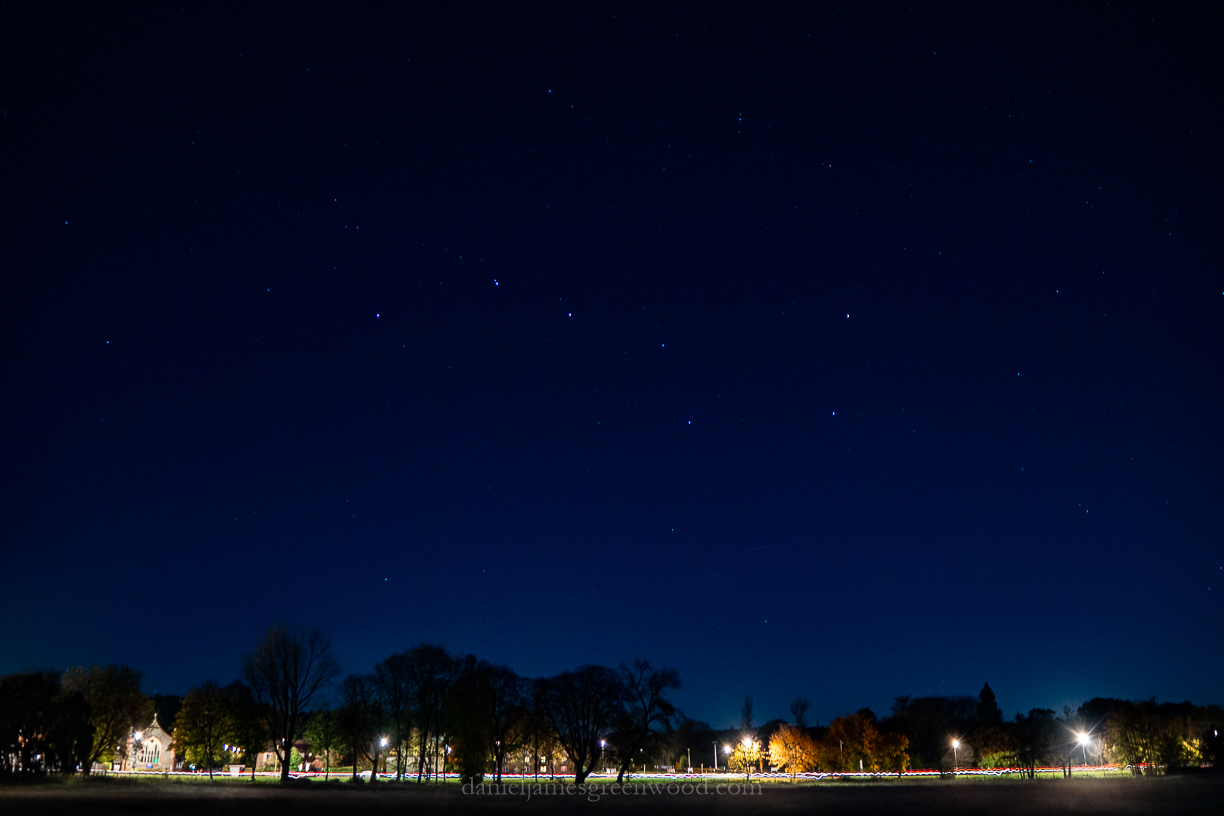 Nightfall. The traffic throbs white and red along North Street. The streetlamps light a line of trees penning the cars in against the buildings that crowd one side of the road. The illuminated frame of a church window stands between two black trees like a section of the Taj Mahal.

I’m here to drink in the swelling night sky. Above Midhurst the Plough sits like an advert for something half-formed or untranslated. As the night deepens more stars cluster around iconic constellations I can’t put a name to.

People pass on a couple of occasions, one man greets me, his scotty dog with a green collar glowing around its neck in the dark. The night has not dimmed its senses, it seems enlivened, sniffing at the night with ears pricked up. 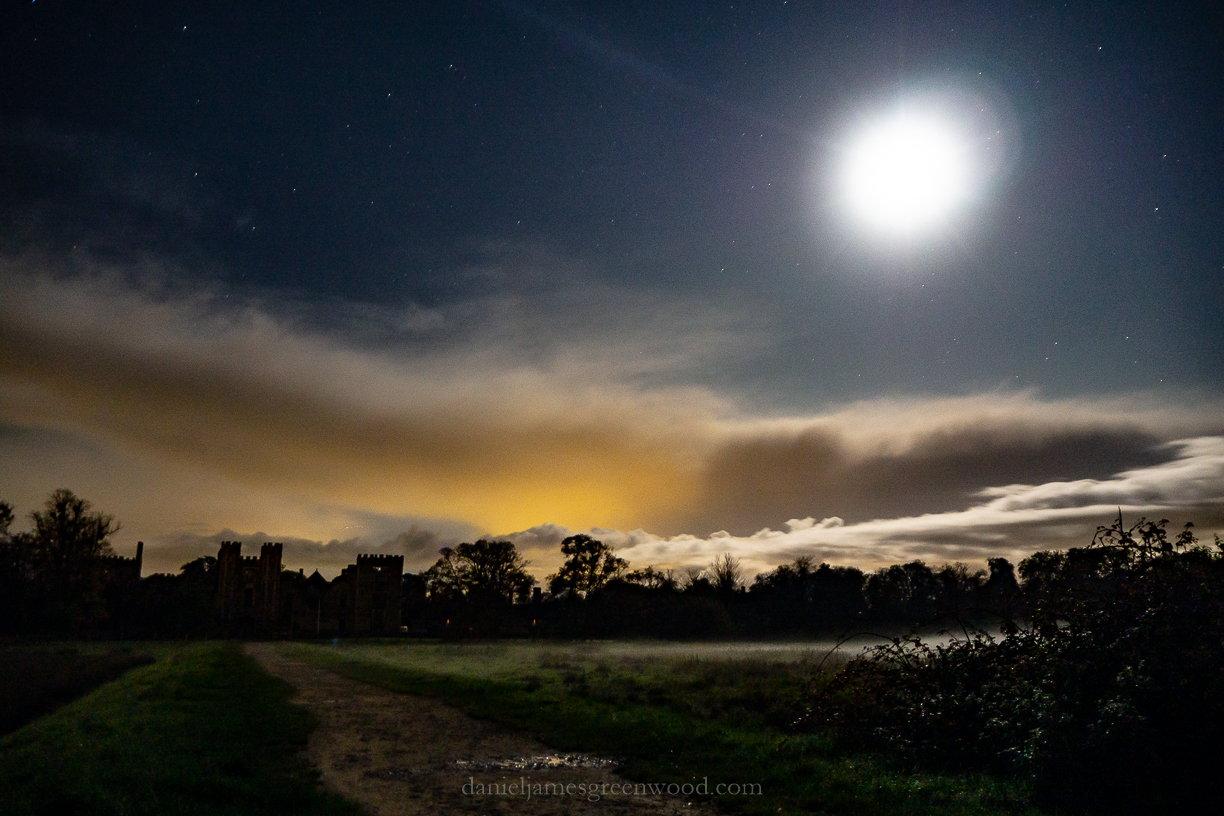 Over the Rother, where it funnels past the Cowdray ruins, the moon draws up mist from the river, matched in the cloud that sits beneath its white beam. Who knows what could be creeping in towards me under that white veil.

Aeroplanes blink and roar in the sky, male pheasants clash in metal at the margins of the wet grasslands separating the Cowdray ruins from the Midhurst traffic. The stars seep through yet more.