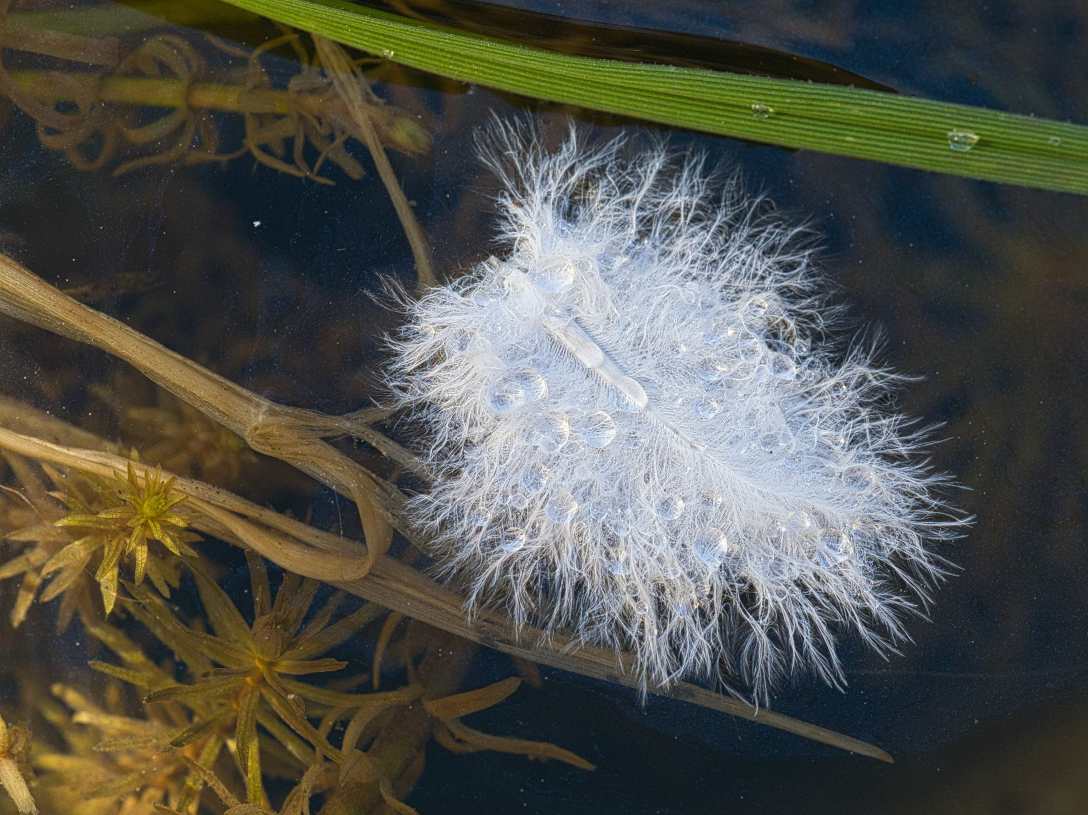 Last year we installed a pond in our garden. It’s nothing special, just an old washbasin bought from an antique shop sitting on the patio. It has flag iris, some figwort and other aquatic plants bought from the garden centre. I noticed a couple of weeks ago the first resident of the pond, a water beetle zipping around the underwater vegetation. I didn’t get enough of a look to identify it, not that I would have done much there anyway.

One morning I spotted a downy feather resting on the pond’s surface with some drops of dew sitting on it. Looking closely the feather’s fibres were like lightning bolts or fungal hyphae spreading out across the surface of the water. I was crouched down over the pond to the point that the postman didn’t see me and got a fright:

‘You scared the living daylights out of me there, Dan, you’re like a ninja!’

Hairy-footed flower bees have continued their territorial dominance of my garden. The male bees are a flippin’ nightmare to photograph, the image above took a lot of channeling my inner ‘macro ninja’ to approach before it flew away.

In the past two weeks the all-black females have appeared and are now being followed by the male bees as their pairing routines develop. Above is an archive image from a few years ago.

An example of why bright sunlight isn’t good for macro photography can be seen in Exhibit Z, above. This was fly does have an orange beard though which was something I hadn’t noticed until I drove up the shadows bar in the editing software.

The nursery web spiders were basking once more in their spring way. They are lovely spiders and I think could probably help more people to partially overcome any fears they may have. This was an interesting article (with a clickbait title) on spiders being pushed into civilisation by floods in Australia. And then there was this about the discovery of a depiction of a spider god in Peru. I wish people revered invertebrates in the way they did birds and mammals. Also, fungi.

Finally, a sign of spring’s imminent arrival is this bunch of guelder rose flower buds. Enjoy these spring days if you’re living in the Northern Hemisphere, they’re gone before you know it.