I have been taking an online archaeology course through the website FutureLearn. You can imagine my sheer delight when one of the sections was focused on, you guessed it, FUNGI!

The course explores the Mesolithic (Middle Stone Age) archaeological site of Star Carr in Yorkshire. The fungi section of the course covers the species discovered at the site and what they might have been used for by the people living there between 15,000 and 5,000 years ago. 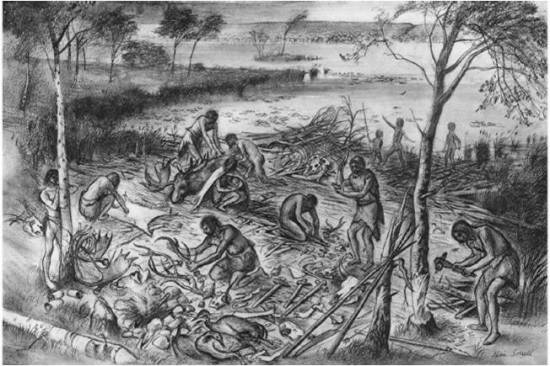 Image of the Excavation site Star Carr located in North Yorkshire England. The image is a reconstruction Alan Sorrell’s reconstruction of Star Carr in 1951, Illustrated London News 3 (via Wikimedia Commons)

The Mesolithic followed the Paleaeolithic (Old Stone Age) in 13,000BC, ending with the Neolithic (New Stone Age) around 5,000BC.

The Neolithic is seen as the period where human populations became more settled after the development of farming. These agricultural developments are what gave us much of the world we live in today. Current European farming techniques originated in the Middle East, slowly spreading west to replace the old hunting and gathering of the Mesolithic. 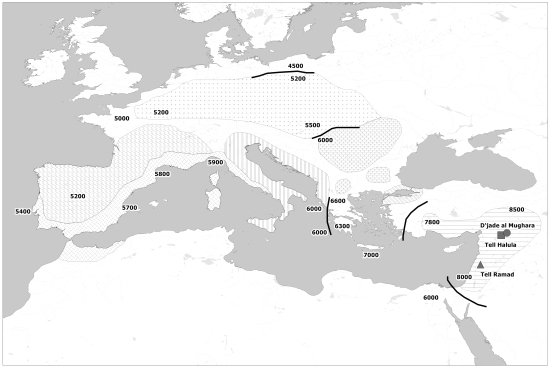 Map of the spread of Neolithic farming cultures in Europe, dates in year BCE (via Wikimedia Commons)

But this isn’t Farmy Friday, so let’s get back to the pre-agricultural times when mushrooms were a key resource.

The fungal finds at Star Carr have produced specimens of hoof fungus, willow bracket and birch polypore. This doesn’t include the species known as crampballs, King Alfred’s cakes, or in scientific language Daldinia concentrica. From experience, this is the fungus that people in Britain today most recognise as one which can be used in the process of making fire. This is probably because of the recent boom in bushcraft. The fungus gets its most evocative name of King Alfred’s cakes after an English folk story.

To people outside the UK or without a grasp of English history, this name is quite meaningless. It is based on the tale of King Alfred who was exiled in the Somerset Levels during the Viking invasion of Winchester. Alfred failed to keep an eye on a woman’s loaves of bread that were on the fire and they burned. It is said that she had no idea he was the king, so far removed was he from his throne. Don’t worry, he eventually came back and pushed the Danes away a bit and established England.

Last week I donated 1000 of my own words to the cause of bracket fungi. The findings from Star Carr have taught me about how these fungi were used by our ancient ancestors. Perhaps most interestingly, the fungi found were largely there because they had been foraged from elsewhere. Star Carr is a site next to a lake, so any woodland surrounding it will have been wet and it’s likely the people living there travelled to other places to gather fungi. There is evidence of the trading of ornaments and other items from across Europe, so people were not confined to the area itself in the way we live now. 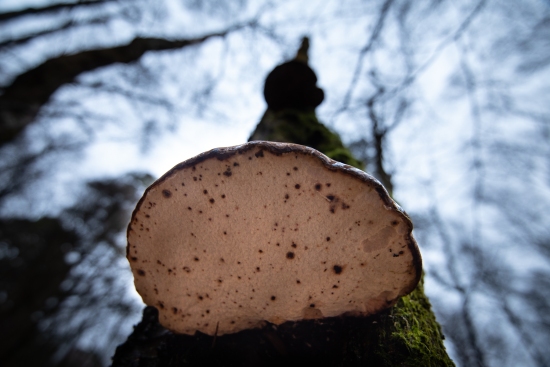 Birch polypore or razorstrop fungus haunts me out there in the woods. It is the one that catches the corner of my eye and fools me into thinking it’s autumn. It is a very common species where it acts to control population density. It plays a crucial ecological role in that it breaks birch trees down into nutrients and minerals, and therefore a substrate which can become soil. Fungi in woodlands are life-giving organisms. As a resource it was once used to sharpen tools in the manner of a leather strop, but it is also very useful in its ability to burn slowly and for long periods. This would have been crucial for people who were travelling and needed to make regular camps as we know Mesolithic peoples did. 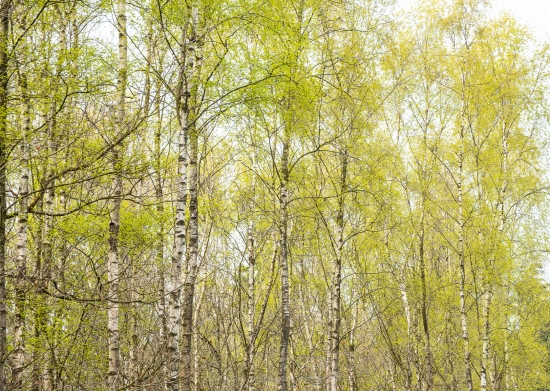 Birch is an incredible resource. Like fungi, it can be used to make fire. There is no doubt that birch will have been used by hunter-gatherers for this purpose. The bark was used to make slippers, matting, boxes, even canoes. At Star Carr birch bark rolls were discovered. The evidence is that they were cut from a tree and would have been used as torches. The ‘tar’ inside birch bark could have been extracted and used to secure flint arrow heads. Nowadays it’s known for being able to make birch wine when the sap begins to run in spring.

The image above is of a dead beech tree covered in bracket fungi. Hoof fungus, so named because it looks like a horse’s hoof, appears to be a key species in Mesolithic Europe. It’s present across the Northern Hemisphere so it will also have been of use to Native American peoples. It has another common name of tinder fungus. An important material deriving from hoof fungus is amadou. This is the spongy inside of hoof fungus that can be used to make embers. The video below by the team at Star Carr shows how it can be used, along with pyrite, to make a fire. This is exactly what people in Mesolithic times would have done.

It just goes to show how resourceful people were in the Stone Age. It also reminds us of how important fungi has been to us, not just on the ecological level of recycling organic matter and its place in the woodland ecosystem. It helped to keep people warm and therefore alive.

After so much recent rain, the water flows fast through the s-shaped streambed of Sheepwash Gill. Clouds have consumed a sunny morning, Wealden clay clogs under foot. I’m trying to cross the gill by treading across the buffed sandstone which is usually above water. This is no ‘Robert Macfarlane climbing a mountain up a stream in his pants’ kind of effort. The water runs ankle-high against my boots.  On the other side a dog bounds down off the leaf-littered slope and barks at me, stopping my crossing. It’s big. It jumps around at the water’s edge in that ‘I’m trying to pretend I’m going to eat you’ kind of way. Its owner calls it back and I find another way to cross.

A girl watches me as I find a short gap to hop over. The dog is her family’s. They’re gathered around dens made from branches and logs on the banks of the gill. The eldest man is grappling with a thirty-foot long birch tree that’s hung up in another tree. He’s getting advice from his young son on how to get it down. The man is wearing brown leather safety boots, a sure sign of a construction worker enjoying a Sunday with his family in the woods.

The birch won’t move much and he gives up. St. Leonard’s Forest is covered in birch. It’s the most westerly point of the High Weald’s heaths, much of which is covered by wild birch and gorse, or otherwise planted up with conifers for forestry. Birch is seen as an enemy or nuisance but it is a special tree that has benefited our species in our evolution. Its wood makes excellent spoons, its bark can be used as fire lighter, its sap tapped for syrup, its branches make brooms. Its Latin name ‘betula’ means ‘to beat’. Getting walloped by birch branches was once a recognised punishment, sometimes in public.

The birches are all yellowing and dropping now, turning to their deep, purple and leafless phase. The small yellow leaves catch by the petioles in mosses and on the splintered fibres of broken heartwood. In the dark pine plantations of St. Leonard’s Forest they fizz and spark. 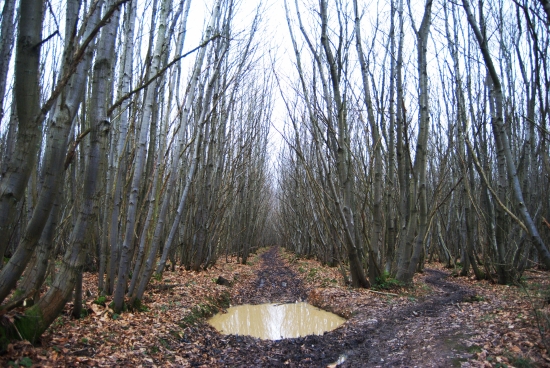 The piles of birch trunks tell us that this chalky fringe of King’s Wood has recently been coppiced. The heartwood glows golden against the black, brown and grey of a winter’s afternoon. The paths are boggy, holding the tracks of boots and the tyre marks of cyclists and scramblers. Large ditches appear at intervals, home to trees and dead wood. A Soakham Downs poster a little way back identified these as chalk pits dug in old times to extract the chalk from the soil. The chalk was then spread in the fields – what once would have been woodland – to fertilise the soil, left to weather under sun and rain.

Further ahead the woodland opens in earnest, endless tracts of sweet chestnut coppice climbing into the sky. A brown puddle reflects the bare branches. Sweet chestnut provides the nuts we like to roast at Christmas, as well as forming the most economically viable form of coppicing in today’s market. The poles are cut after about five or six years and split down the middle to make chestnut paling, a type of fencing used in parks and nature reserves up and down the country. It’s another aspect of the Roman’s botanical legacy – they brought it along with them. The vertical slant of the branches is interrupted by a movement of four legged animals crossing our path in the distance. Our talking pauses as we watch an endless trail of deer move from right to left, disappearing into the trees. One of them was all white and it sticks in my mind like a puncture. We make our way towards Chilham, stopping briefly to search amongst these overgrown trees for walking sticks. We listen to the multiple stems tapping together as the wind steals through, some trees creaking. This a sound that in the endless scene of coppiced trees we mistake for shrill and distant calls of people. 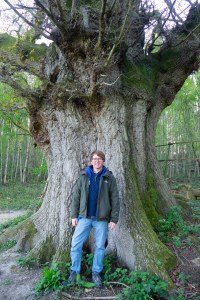